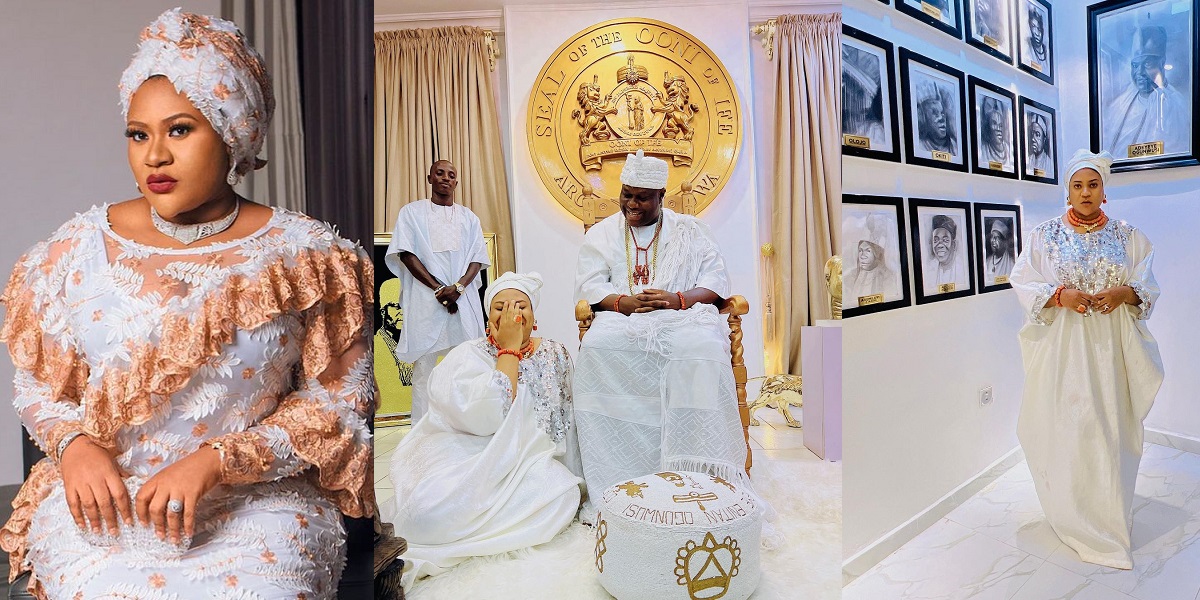 
Nollywood actress, Nkechi Blessing, has shed more light on her visit to the Ooni of Ife, Oba Adeyeye’s palace, amid the controversy that the visit stirred online.

Recall that the beautiful thespian caused a stir on the Nigerian web after a photo of her donned in a white outfit and laughing sheepishly at the feet of the Ooni surfaced.

Blessing shared the photo of herself and the monarch on her Instagram page with the caption, “Ever met a jovial king?” Well, this picture says it all. I have never laughed this hard in a long time.” Read here.

Nkechi’s post elicited a flood of reactions from Nigerians, with many suggesting that she’s interested in becoming the king’s eighth wife.

However, in an updated post, Nkechi explained the reason for her visit to the palace, saying she was selected to be one of the judges of the Queen Moremi pageant.

She also disclosed that one of Ooni of Ife’s wives, Queen Ronke Ademiluyi, gave her a royal hand fan.

“It was an honor to be invited to the palace by her Royal majesty Olori Aderonke Ademiluyi Ogunwusi as one of the judges for @qminternational indeed we be doing so much good in the eyes of strangers. I do not take this opportunity and privilege for granted ma. When I got that call, I tot the king was going to put me in prison but one mind told me NBS Go on that trip you might be wrong.

“Now it doesn’t matter what name you call me, Olosho, ashawo, dirty, razz, uncouth, infact I have been called diff names on this app, but I did nothing but focus! Cus really those your space, once you slow down they will take your place without flinching. I Nkechi Blessing Sunday remain UNSTOPPABLE. You all brought me this far all in d name of trolling and negative comments. Please don’t STOP. It’s all love from this side”. She wrote.