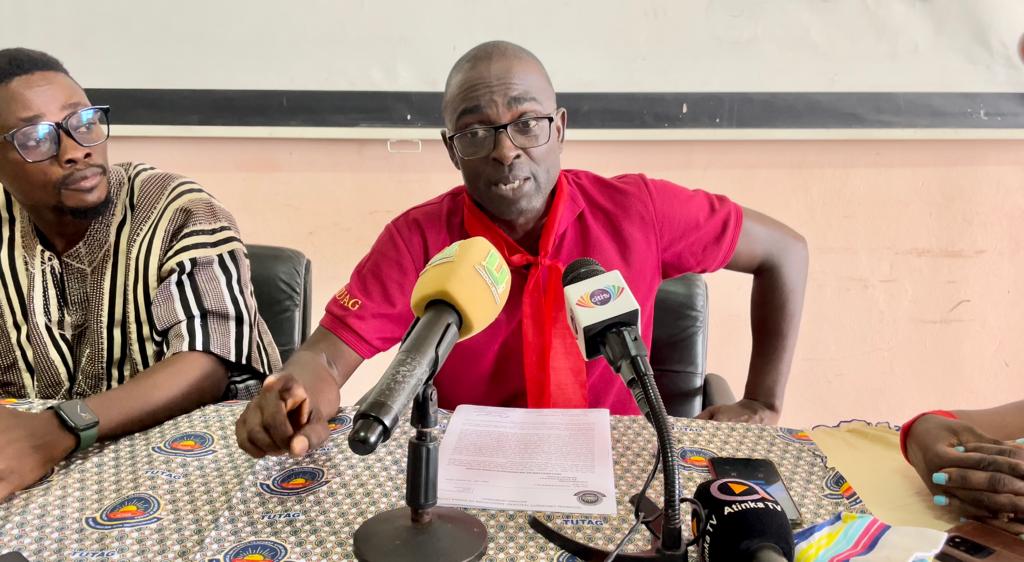 The leadership of TUTAG on Friday, November 18th, 2022 declared a nationwide indefinite strike action over the government’s failure to act on the codified conditions of service of members, which have been outstanding since 2016 despite TUTAG’s threat of strike last week.

Addressing a press conference to declare its support for the indefinite strike, the Secretary of the TTU Chapter of TUTAG, Dr. Boakye Yiadom asked all lecturers to stay away from academic activities since the government has failed to honour its part of the bargain.

“Lecturers must stay away from all activities on campus. This is an indefinite strike, and we don’t expect any of our members to be seen in the classroom or engaging in any other activity that concerns the school…the key points are the condition of service, the off-campus allowance, vehicle maintenance allowance and that of fuel allowance. These are the four basic things that we are fighting for, and we believe that we’ve engaged the ministry for far too long, and we can no longer wait, therefore we are calling on this strike so that our members will stay at home and cease from all other activities on campus until further notice”, he emphasized.

Reacting to the news of the strike, Vice President of the Takoradi Technical University’s Students Representative Council, Emmanuel Katambo while expressing worry over the industrial action, appealed to the government to quickly address the TUTAG concerns to reduce the harsh impact on academic work and student’s finances.

“From the students’ view, we are looking at the effect of the strike on the academic aspect of the students. We just reopened school and the freshers are also in here, so as I am talking to you now, we are done with a few courses. Looking at our calendar for this semester, it is already packed, so with this strike in, we plead with the government to address the concerns of our lecturers to help students to move on with the academic calendar”, he said.

The SRC Vice President of Takoradi Technical University said any prolonged TUTAG strike would affect the finances of students, hence the need for government to quickly attend to TUTAG.

“We’re already tight with our daily expenses, so can you imagine we not going to lectures and staying around and spending the little money we have for food and other stuff when there are no lectures? Others are now also going to use it betting which is irrelevant to our education. So we are pleading with the government to come to the aid of our lecturers and support them with whatever they’re asking for so that academic work resumes,“ he added.