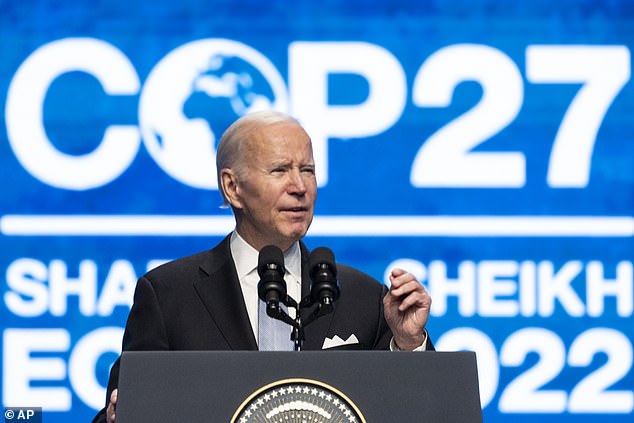 
Biden agrees to pay climate reparations: US will compensate developing countries for global warming – but GOP-led House could block funding – and gas-guzzling China WON’T have to pay into global fund

By Stephen M. Lepore For Dailymail.Com

The United States will take part in the creation of and contribute to a fund that will pay developing nations to tackle climate change.

The fund, negotiated at the United Nations‘ COP27 Summit, was originally known as a ‘loss and damage’ fund and had been blocked by previous American administrations.

The nations involved are largely from Asia, Africa, Latin America, the Caribbean and the south pacific, who see the matter as payback for a crisis that they did not contribute to but nonetheless could, in their view, destroy them.

The money will go toward helping them cope with disasters like floods and drought that they say have been made worse by climate change.

A Biden administration official confirmed the decision to the New York Times Saturday.

However, there will be roadblocks, mainly that both the US and the European Union are demanding China pay into the fund. The UN still designates Communist China as a ‘developing nation.’

It will also be a challenge to get a soon-to-be Republican-controlled Congress to approve the additional funds after getting $1billion as part of the Inflation Reduction Act.