Analysis: Call for Pence cooperation shows ambition of January 6 panel ahead of anniversary 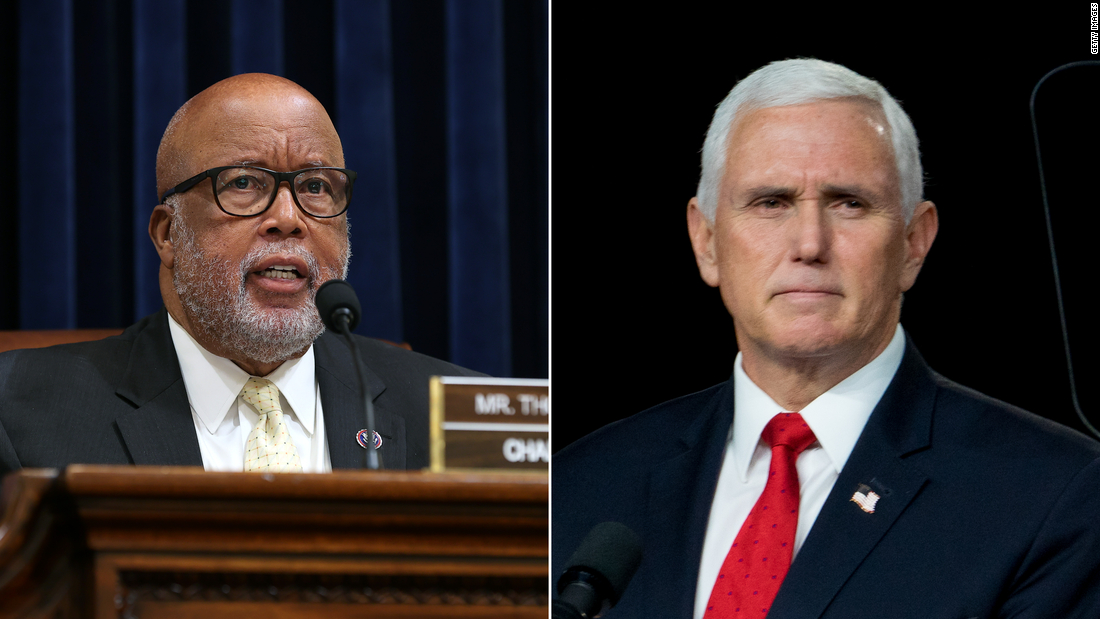 Committee Chairman Bennie Thompson on Tuesday called on Pence to voluntarily speak to the panel about what he knew about the attempt by the then-President and his advisers to convince him to go back on his constitutional duty to certify President Joe Biden’s election win. The Mississippi Democrat also wants Pence’s take on the fraught moments when he was in the Capitol and a pro-Trump mob was chanting for him to be hanged during the mayhem that raged a year ago.

“I would hope that he would do the right thing and come forward and voluntarily talk to the committee,” Thompson told CNN.

The request once again puts Pence on the politically perilous tightrope between incurring the wrath of Trump and his supporters and the rule of law. The idea that the former vice president would voluntarily throw himself back into the controversy by testifying appears far-fetched, however. He has painstakingly spent the last year putting space between himself and the infamy of January 6 as he struggles to keep himself viable for a possible future Republican presidential campaign. Still, various Pence aides have begun engaging with the committee, including his former chief of staff Marc Short, whom CNN reported last month is cooperating.

Thompson spoke to CNN moments after the committee fired off another request for cooperation, calling on Hannity, a prime-time Fox News opinion star, to discuss dozens of texts it says he sent to Trump and the President’s team in the days surrounding January 6. The messages once again lay bare the propagandistic synergy between the conservative network and the Trump White House. It also suggests that the panel is willing to go after the most high-profile witnesses and brave significant political controversy in its quest to tell the story of January 6.

These developments are just the latest sign of momentum for the committee. According to a new court filing on Tuesday, the panel obtained the financial records of Trump spokesman Taylor Budowich in late December. The documents appear to fit into the panel’s attempts to trace the source of funding of the rally on the Ellipse in Washington, DC, on January 6, where Trump told the crowd to “fight like hell” to keep him in power, which later evolved into the violent invasion of the Capitol.

Earlier this week, leading members of the panel indicated they had received testimony from inside Trump’s West Wing on the day of the insurrection, focusing on the then-President’s failure to do more to stop the attack by his supporters. Committee Vice Chair Liz Cheney, a Wyoming Republican, revealed that there was “firsthand” testimony that Trump’s daughter Ivanka, then a White House official, twice asked her father to call off the rioters. The disclosure shed fresh light on Trump’s decision-making and dereliction of duty in failing to defend the Capitol and the constitutional process of ratifying an election.

A day of vigils

Fast-moving developments from the committee add a new dimension to a series of vigils that are set to be held on Capitol Hill on Thursday to mark one year since the worst attack on US democracy in modern history.

Biden will give an address that the White House says will “speak to the truth” of what happened when Trump supporters seeking to steal his presidency roamed the Capitol, sending lawmakers fleeing for their lives. The legitimately elected President will stress the peril posed to the rule of law and the US system of democratic governance — which has arguably only increased during Trump’s relentless campaign of lies over the last year.

The defeated ex-President had planned what was likely to be a day of counterprograming filled with falsehoods. But he suddenly announced on Tuesday that he was canceling a Thursday news conference at his Mar-a-Lago club in Florida that would likely have cast his conduct and constitutional arson in an even poorer light.

Progress signaled by the committee in recent days appears to increase the possibility that it will succeed in creating the most authoritative narrative yet of the events that led up to the insurrection and who was responsible. But it remains a long shot to change the political dynamic surrounding the attack, following a year in which Trump and his Republicans have whitewashed the history of the assault.

The GOP is still trying to blame House Speaker Nancy Pelosi for the security lapses on the day of the attack, even though she doesn’t control the US Capitol Police. And Republican Sen. John Thune of South Dakota on Tuesday sought to paint commemorative events scheduled for Capitol Hill as a partisan exercise.

“I think they will try to politicize the event, you know, they’ve been doing that all week.”

‘His life was at risk’

Thompson told CNN in an interview that there had been no formal request for Pence to discuss the events of January 6 with the committee, which was set up after Republicans backed out of a plan to hold an independent commission on the insurrection.

“But if he offered, we’d gladly accept. Everything is under consideration,” said Thompson, who heads a committee that has issued subpoenas to a long list of other Trump aides that were wanted for depositions.

Thompson said he wanted to gain an understanding of why Trump was so late to act to quell the riot even though his vice president’s life appeared to be at risk.

“We’d like to know what his security detail told him was going on,” Thompson said.

Given the political stakes for Pence, it seems unlikely that committee members believe he would cooperate. If that is the case, this could be yet another example of savvy political messaging that the committee has used to focus attention on its work — even as Trump does his best to obstruct it.

The committee’s interest in speaking with Pence comes amid signs that his inner circle has been more open in engaging with the investigation. Besides Short, CNN’s Jamie Gangel revealed on Monday that Pence’s ex-national security adviser Keith Kellogg, who was with Trump in the White House during the assault on Congress, had given a deposition. And according to sources familiar with the discussions, some Pence aides have been proving more willing to engage with the committee than previously made public.

The revelations are likely to infuriate Trump, who demands a strongman’s absolute loyalty from subordinates even when it leads them into dangerous legal territory. It may also further fracture the relationship between the former President and his vice president. As he prepares the groundwork for a possible political comeback, Pence has taken pains to avoid talking about January 6, when he rejected Trump’s entreaties to subvert the constitutional process that certified Biden’s 2020 election victory. As he addressed Republicans in the first-in-the-nation primary state of New Hampshire last summer, Pence tried to draw a line on his clash with Trump on January 6, but also to claim a share of credit for his administration’s achievements.

“I don’t know if we’ll ever see eye to eye on that day. But I will always be proud of what we accomplished for the American people for the last four years,” Pence said.

It was always a long shot that Pence would be able to pull off such a straddle in a party that is still dominated by the ex-President and his almost mythical hold over the GOP base and congressional Republicans. That task would be even more unlikely if he cooperated with the January 6 select committee. And the next few days, as they refocus public attention on the chaos and violence of a year ago, are going to be deeply uncomfortable for Pence as it is.

Fox star in the spotlight

Hannity also finds himself in an awkward position after the committee asked him for voluntary cooperation. The request centers partly on what the panel says are text messages from Hannity pushing back on the plan drawn up by Trump’s legal team to challenge the certification of Biden’s election victory on January 6. The texts appear to show Hannity casting doubt on the plan and urging Trump to prepare for a departure from office.

The committee said it appeared that Hannity has “detailed knowledge regarding President Trump’s state of mind,” and engaged with the then-President numerous times. The messages are apparently among those sent to former White House chief of staff Mark Meadows, which he turned over to the committee when he was cooperating with the investigation. Meadows has since declined to testify, citing executive privilege — a move that earned him a contempt of Congress citation by the Democratic-led House.

The disclosures are embarrassing for both men. Meadows now appears to have offered the committee a chance to burrow deep into Trump’s inner circle. While Hannity’s doubts about Trump’s strategy show that at least one of the President’s supporters was dwelling in reality, they could also undercut his own strategy of acting as Trump’s cheerleader-in-chief and potentially damage him in the eyes of the former President’s supporters. The texts that show Hannity strategizing Trump’s exit also yet again expose the extraordinarily close relationship between Fox and the ex-President’s White House that clearly infringes journalistic ethics but has been mutually beneficially.

Hannity’s lawyer, Jay Sekulow, told CNN that the Fox star’s camp was “reviewing the committee’s letter and will respond as appropriate.”