Who drove them home? Cops hunting killer of four Idaho students say two were given a ride home 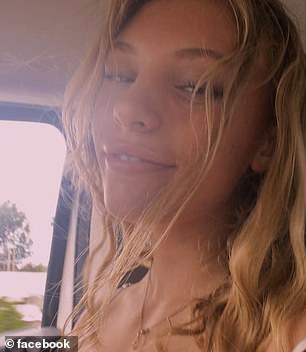 
Police in Idaho are hunting for the person who gave two of the four murdered students a ride home shortly before they were killed, as they announced they had ruled out as suspects the students’ housemates and a man seen loitering behind them at a food truck.

There remains no suspect in the killings of the three women and one man in the early hours of Sunday, and the murder weapon – believed to be a knife – has yet to be recovered.

Kaylee Goncalves, 21, and her best friend since 6th grade, Madison Mogen, 21, were found dead in the home along with Xana Kernodle, 20, and her boyfriend Ethan Chapin, also 20. Chapin did not live in the house.

Kernodle and Chapin had been at a party on campus, while Mogen and Goncalves were at a bar in the town.

On Friday evening, Moscow police said that they had learnt Mogen and Goncalves, last seen at a food truck outside the bar, did not walk home.

They are asking anyone who saw the four to get in touch.

The girls’ roommates, Dylan Mortensen and Bethany Funke, were in the house when the four were stabbed to death between 3-4am on Sunday.

Dylan Mortensen (left) and Bethany Funke (right) shared the house with Kaylee Goncalves, 21; Madison Mogen, 21; and Xana Kernodle, 20. Mortensen and Funke survived the attack that killed the other three

Ethan Chapin and Xana Kernodle. Kernodle lived at the house with the other two women who were killed, plus two more roommates. Chapin, Kernodle’s boyfriend, was staying at her home

Police were called at noon on Sunday to reports of an ‘unconscious person’.

The roommates were not the 911 callers, said Aaron Snell, spokesman for Idaho State Police. The 911 caller’s identity has not been released.

Earlier on Friday, Moscow police said Mortensen and Funke were officially ruled out, as was the unnamed man near the food truck.

‘At this time in the investigation, detectives do not believe the two surviving roommates or the male in the Grub Truck surveillance video are involved in this crime,’ the police said in a statement.

‘Additionally, online reports of the victims being tied and gagged are not accurate.

‘The identity of the 911 caller has not been released.’

They said the hunt for the murder weapon continued.

‘As part of the investigation, detectives seized the contents of three dumpsters on King Road to locate possible evidence,’ the police said.

‘Additionally, detectives have contacted local businesses to determine if a fixed-blade knife had been recently purchased.’

With the families of the victims growing frustrated, and University of Idaho students increasingly fearful, Moscow police said they were wading through all the evidence and tips.

‘At the time of this release, detectives have received nearly 500 tips which are being processed, investigated, and cleared,’ they said.

‘Thirty-eight interviews have been conducted with individuals who may have information about the murders.’

James Fry, chief of Moscow police, asked anyone who had seen the four or been at the gatherings with them to get in touch.

On Wednesday, footage emerged of Mogen and Goncalves ordering takeout from a food truck and chatting with other young people two hours before they were stabbed and left to bleed to death.

The last known movements of at least two of the victims: The girls visited the truck at 1.43am-1.53am. It’s unclear if they went straight home, but police say they were murdered shortly afterwards sometime between 3am and 4am

The video shows  Madison Mogen and Kaylee Goncalves stumbling towards the desk, ordering a plate of carbonara pasta, and waiting 10 minutes. They interacted with other young kids who were also waiting for food and took photos of each other before walking away with their food

There were dozens of other youngsters waiting for food at the truck, which is parked outside a nightclub in downtown Moscow, Idaho, every Saturday between 10pm and 2.30am. One young man, who is shown standing behind Kaylee with his hood up, appeared to be with them, but he did not leave with them

While Kaylee ordered, Madison spotted a friend and walked over to hug him warmly (right). She then returned to wait with Kaylee

The girls walk away from the food truck at around 1.53am, less than two hours before police say they were murdered at home

The video was filmed by the food truck operators Grub Truckers, as part of a live stream from Saturday night.

It shows the pair stumbling towards the truck, ordering a plate of carbonara pasta, and waiting 10 minutes between 1.33am and 1.43am on Sunday morning.

The women appeared to walk towards the truck from the other side of the street and when they arrived, they were joined by a young, unidentified man.

He hung back as Goncalves ordered the food, then waited with the women until they received the order.

At 1.53am, the women walk away in one direction, leaving the young man speaking with others at the truck.

He looked in their direction, surprised that they’d walked off, but then is seen walking around the corner, in a different direction to them.