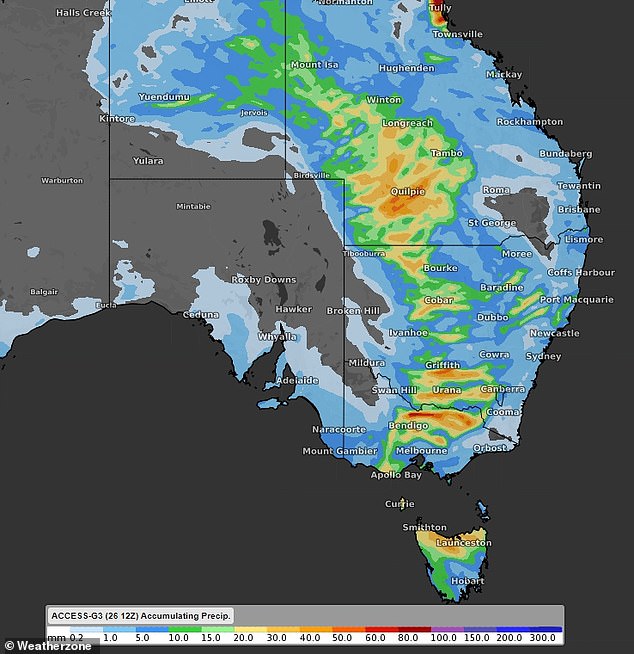 
Aussies holding out for the spring sunshine will need to wait a while longer with a 2000km-long rain bomb set to dump above average falls this week.

The eastern states are forecast to be hit with up to 40mm of rain on Monday, with showers to continue through to the end of the week.

A 2,000km rain-band is set to bring heavy rain and thunderstorms to Australia’s east on Monday and Tuesday (pictured, predicted rainfall for Tuesday)

The warning comes as Sydney looks set to break its record for the most rainfall.

Sydney has copped more than two metres of rain in a calendar year for the first time in almost 60 years – reaching that mark in just eight months.

Just 200mm of rainfall throughout the rest of 2022 will see this year become Sydney’s wettest year on record.

According to the Bureau of Meteorology (BOM), Monday is set to be a wet day across the country, with large parts of western and southern NSW, northern Victoria and southwest Queensland likely to see heavy rain.

The 2,000km-long rain band stretching from Queensland’s west through to Victoria began moving east on Monday morning and will cause heavy rainfall across the  eastern states through to Tuesday.

Sydneysiders have seen the wettest year since the 1960s with over 2,000mm falling in just eight months

In Victoria, rain started falling in the state’s northwest on Monday morning but is forecast to spread and cover most of the state by this afternoon.

Melbourne is expected to see thunderstorms on Monday and Tuesday with daily rainfall totals of 15mm.

The storms are set to be accompanied by damaging and destructive winds.

Heavy rain in NSW was focused in the state’s west on Monday morning but will slowly move eastward throughout the day.

However, the system is forecast to ease as it moves across with NSW’s south coast expected to only see light rain.

Sydney is set to stay cloudy through to Wednesday before showers move in for the remainder of the week.

Canberra will also be caught in the system with thunderstorms expected through to Tuesday and cloudy weather for the remainder of the week.

Wednesday and Thursday mornings in the country’s capital are expected to be cold and foggy.

Weatherzone.com.au meteorologist Yoska Hernandez said a cold front will move in on NSW from Friday.

‘The cold front is going to bring a southerly change that will drop temperatures over the weekend,’ she said.

‘The change will bring further showers.’

A 2,000km rain-band will bring heavy rain to Queensland’s west before moving east towards the coast

The severe weather will continue to focus on the state’s outback before moving eastward on Tuesday as the north coast rain moves to cover most of Queensland’s top.

Showers are forecast to move over Brisbane on Tuesday before rain mostly clears from the state on Wednesday.

However, Brisbane is expected to see light showers through to next week.

Residents in Canberra, Melbourne and Adelaide have been warned to prepare for thunderstorms on Monday and Tuesday

Eastern South Australia is forecast to catch the tail end of the 2,000km rain-band with thunderstorms expected in Adelaide on Monday and Tuesday.

The Northern Territory is also set to see some rain with light showers forecast in the state’s northeast on Monday and its centre on Tuesday.

Darwin residents will dodge most of the rain with Monday and Tuesday set to say sunny.

As the rain-band moves east, storms will pass over Tasmania and bring light to moderate showers throughout the state.

Hobart is forecast to see showers on Tuesday which will ease on Wednesday before rain sets in until the end of the week.

Australia has been warned to brace for more wet weather, as the La Nina system brings heavy rains. Picture: Bureau of Meteorology

Heavy rain is also set to move in on southern WA on Friday and hang around throughout the weekend.

Perth will stay mostly sunny until then, with showers forecast over the weekend.

On Friday the BOM issued a warning that upcoming wet weather could lead to flooding throughout Spring.

Bureau of Meteorology senior climatologist Dr Lynette Bettio said: ‘where soils and catchments are wet, and stream flows are high, further rainfall this spring will increase the risk of flooding for eastern Australia.’

‘In northern Australia, the first rains of the wet season are likely be earlier than normal for much of Queensland and the Northern Territory.’

The BOM warned there is a 70 per cent chance of another La Nina weather event this Summer.

In a La Nina year, the average rainfall between December and March is 20 per cent higher than regular years.

Wednesday: Partly cloudy with a shower or two. Min 11 Max 20

Share. Facebook Twitter Pinterest LinkedIn Tumblr Email
Previous Article‘You are more powerful than you think.’ Why one man says it’s too soon to write off democracy in America
Next Article US gov’t committed to supporting women entrepreneurs in Ghana