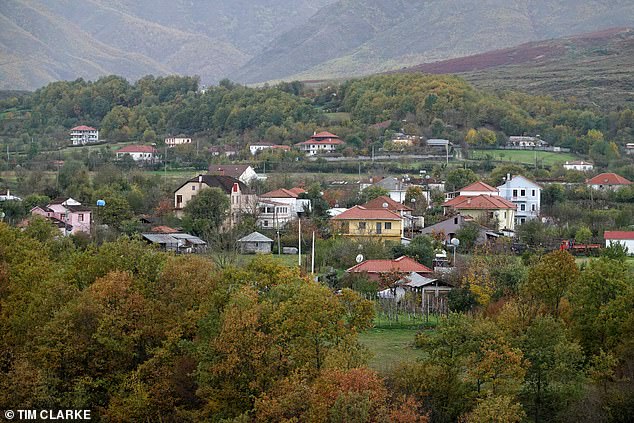 
This is the tiny village in the Albanian hills where the comfortable, modern houses have all been built on money sent home by migrants illegally entering Britain.

Picturesque Muzhak has a population of around 1,200 – and in every family there has at least one member – and in some cases up to three – living in the UK.

Over the last 15 years at least 300 of young people born and raised in Muzhak have left the village, which is around two hours north of the capital Tirana, for the UK using trucks, boats and planes for what they say is a ‘better life’ – and earn six times the wages on offer in Albania.

And with the money they have earned in Britain they have helped fund the construction of dozens of new houses – replacing one storey buildings for lavish three floor homes with central heating.

The comfortable, modern houses have all been built on money sent home by migrants illegally entering Britain

In the neighbouring town of Burrel, mayor Agrom Malaj told MailOnline that 2,000 young people have left the region in search of work in the past 12 months alone, leaving villages there looking like ghost towns.

‘Our region has seen the most people leave and head to the United Kingdom because they see it as a land of opportunity, they can earn a good salary while here options for them are limited, he said.

‘Everyone in Burrel and the neighbouring villages has someone in their family who has left for Britain and in some cases all the children of a family have gone leaving only the parents behind.

‘If you live here or in the countryside outside the town there is not much opportunity so I don’t blame the young people for leaving, we have seen a whole generation of men go.

‘It all started about 15 years ago and back then it was with trucks and it was expensive, maybe £20,000 to get into the UK but now it’s with small boats and the price has come down, around £3,000 so it’s very tempting for them.

‘The people who go to Britain send their earnings home and we have families who have rebuilt their houses with the money they have made in Britain.’

It’s not hard to see why people want to leave Burrel and the surrounding area, turning it into a ghost town as the average weekly wage for those lucky enough to find a job is £125 compared to £640 in the UK.

A rural backwater where cows and donkeys are as common as people on the pot holed high street which has a surprising number of mobile phone outlets.

Among those who have left are the three sons of Ali and Hike Trumci, who live in their new home built with the wages of their three sons who left Muzhak for the UK entering illegally on trucks and later claiming asylum.

Ali Trumci, 71 and his wife Hike, 61 are pictured outside their newly built house in Muzhak, Albania paid for by their children working in Bath and London

Their child, Eldest Artur, 42 is a delivery driver in London while Asim, 36, and Hamit, 29, live in Bath where they are taxi drivers. They have sent money home to pay for the construction of the house (pictured)

Eldest Artur, 42 is a delivery driver in London while his younger brothers Asim, 36, and Hamit, 29, live in Bath where they are taxi drivers.

Standing in the garden of his new two storey home, Ali pointed at the houses in the picturesque valley below him and said: ‘That one was built with money from children in Birmingham, that one from Bristol, that one has children in Liverpool.

‘All of the new houses you see in front of you were built with help from family in the UK,’ then pointing to an unfinished project he said: ‘That one as well that is being built, that is with money from the UK.

‘None of us here would have been able to build comfortable new houses like this without the help of our children in the UK and for that we are all eternally grateful.

‘My sons all went to the UK because here they had no opportunity, they have never told me how much they paid to get into Britain but I have a good idea and they have joined many others from Muzhak and the surrounding area.

‘Everyone around here has someone from their family living in the UK, some have one others, two or like me three children living in the UK and of course we all miss them, but we are lucky as we have been able to visit them.

‘They have all been granted permission to stay in the UK and now have lives there – we went to visit in the summer and we saw the London Eye and Buckingham Palace, but Bath was my favourite. Such a beautiful city.’

The remote village of Muzhak has been built by the proceeds of Albanian migrants in the UK sending money back to their families. Pictured: Houses under construction

It’s not hard to see why people want to leave Burrel and the surrounding area, turning it into a ghost town as the average weekly wage for those lucky enough to find a job is £125 compared to £640 in the UK. Pictured: A beggar in the village of Muzhak desperate for money

His wife Hike, 61, added: ‘We miss our sons incredibly but without them going to Britain we wouldn’t be able to live in a house like this, their sacrifice has helped us enormously.

‘Before they all left we were living in an old one story building with the chickens running in and out and there was no proper heating, just a fire and the smoke filled the house and it was difficult to breathe.

‘But with the money they sent back from the UK we were able to knock it down and start again and now we have a two storey house where all the children can come and stay when they visit.

‘We had hoped they would move back and live with us here so we could be a family again but they have made it clear they will not be leaving and will stay in the UK.’

When asked what life would have been like for his sons if they had stayed in Muzhak had his sons stayed, Ali blinked back tears and wiped his face:’ Black,’ he said:’ Very black. There is not much hope here for our children so that’s why all the young men are leaving but we are also seeing the woman go as well.

‘Britain has been a saviour for poor Albanian people who have left our village and the surrounding area, I would like very much for Britain to take charge of our region and make it a protectorate because we have provided so many people to work there.

‘Can you imagine what my three sons lives would be like if they had stayed here? They would have had nothing and they could have ended up involved in crime but they took the opportunity to go to Britain and are making an honest living for themselves.

‘It upsets me when I hear the British politicians say there is an invasion of Albanians and we are all criminals, that is just not true, look at how hard my sons have worked to help their parents back home.

‘Now I hear talk on the news that Britain wants to send Albanians back but I say don’t let them stay there and work, they need our help and we need our children to work to help us.’

The remote village has been built by the proceeds of Albanian migrants in the UK sending money back to their families, contributing to the redevelopment of houses

Hike added: ‘When my sons said they were going to Britain I cried because I knew I would miss them but because I knew the trip was also dangerous and it would be expensive for them.

‘They travelled to Italy and then to France and I know they got across on trucks and when they called to say they were safe I said a prayer of thanks.’

Back in Burrel the connection with Britain can be seen by the number of UK registered cars in the streets – including several top of the range Audis – but their owners are very reluctant to speak when approached by MailOnline.

One local who declined to be named said: ‘Lots of young men from Burrel have gone to Britain there is no opportunity here for them and they have gone across in trucks but now they go by small boats because it’s cheaper.

‘Many get jobs in the black economy like car washes or labouring and the money they earn they send home to their parents who do up their houses but some also get involved in crime.

‘One of my friends who is in England sent me a video of a cannabis grow he is looking after and the place was full of plants – he said he knew it was wrong but at least he was making some money for his family.

‘You can tell the ones who are involved with gangsters when they come back to Burrel for their holidays because they are the ones with the big expensive cars.’