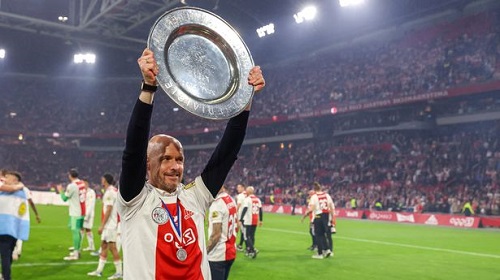 
Erik ten Hag steered Ajax to the Dutch Eredivisie title with one game to spare before he takes over as Manchester United boss this summer.

They wrapped up the league with a 5-1 thumping win over Heerenveen at the Johan Cruyff Arena.

It sent them four points clear of nearest rivals PSV Eindhoven before Sunday’s final round of games.

It was a fitting farewell for Ten Hag, who United announced in April as their next manager.

The Dutchman, 52, will take over from interim boss Ralf Rangnick at the end of this season on a three-year deal, which can be extended by a year.

However, they were beaten 2-1 by PSV Eindhoven in this season’s Dutch Cup final.  –BBC