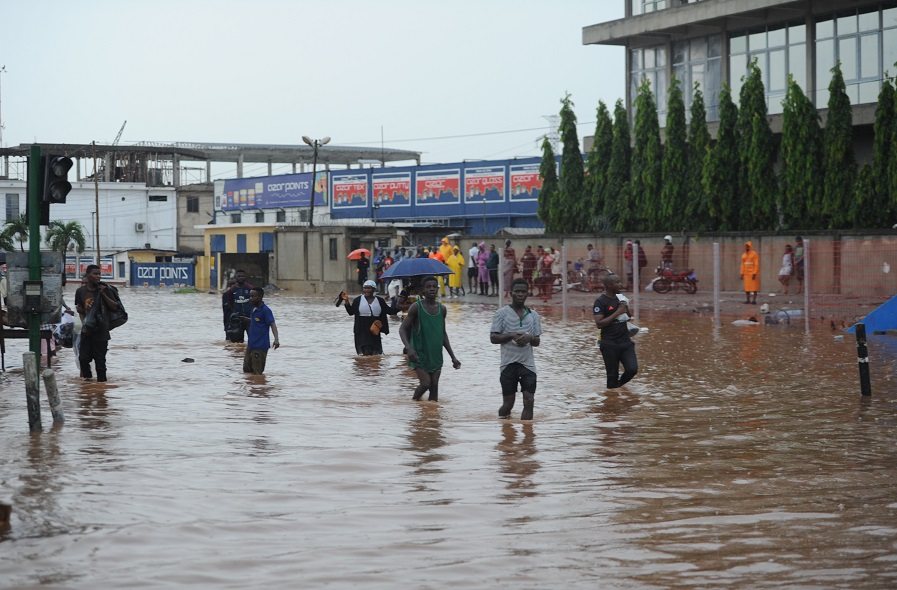 
Disruption to work, heavy vehicular traffic, large swamps of running water on roads, breakdown of vehicles and roads being destroyed characterised yesterday’s downpour in Accra resulting in floods in many parts of the capital and adjoining areas.

The torrential rain which started Monday evening and lasted over seven hours destroyed properties and resulted in accidents in some cases.

Staff of the New Times Corporation (NTC), Inter-City State Transport Company Limited (STC), Kaneshie Polyclinic and other commercial buildings and stores within the Kwame Nkrumah Interchange and North Industrial Area enclave was compelled to scoop water from their flooded offices.

The situation was worse at Kaneshie, Adabraka, Weija and Dansoman where some residents were busy with rescuing their belongings which were being swept away by the running water.

At Tema, Teshie, TseAddo, Tesano, among others, some residents had to flee their homes to seek shelter in nearby safe facilities.

Drains carrying running water were overflown while some potholes on roads were also enlarged and deepened.

Parts of the Kaneshie-Pamprom road close to the Obetsebi Lamptey interchange were destroyed, leaving huge debris and rubbish on the road.

The situation was not different at both ends of the Tema Motorway, where drivers parked their vehicles due to portions of the road being flooded, resulting in heavy traffic.

Earlier, there was a reported mudslide on the Kasoa-Accra stretch of the highway around the toll booth as a result of the downpour.

Similarly, the SCC-barrier road coming towards Accra has been covered with sand forcing motorists and commuters to use the road leading to Kasoa.

Videos and comments about the situation and its attending impacts were posted on social media with many users calling on government to initiate lasting measures to the age-old problem.

Meanwhile, the Ghana Meteorological Agency (GMet) has forecasted that the public should brace up for more rains in the coming days as the country enters the peak of the rainy season.

A meteorologist at the Central Analysis and Forecast Office of the GMet, Joshua Asamoah in an interview with Ghanaian Times last Monday, said although the rains in some places in the southern part of the country including Accra would be normal, they would be intensive.

“We should expect more rainfall once we are in the peak of the rainfall season but it would not be abnormal rainfall. We are not expecting anything above normal rainfall that we experience.”

“But the frequency will be higher within the forest zones in the Eastern and Ashanti Regions. Those areas will have more frequent rainfall. For us along the coast it will be occasional rainfall,” MrAsamoah added.

At  AGM of AfDB in Accra: Let’s develop African economic model …to serve our interest-President advocates