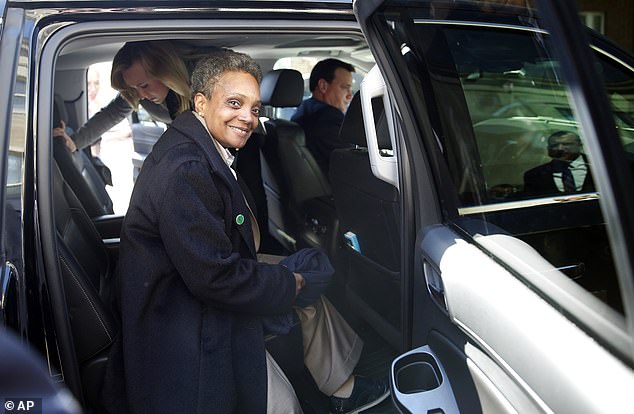 
The motorcade of Chicago‘s mayor has been caught on camera speeding through red lights and breaking the city’s limits – despite Lori Lightfoot herself warning last week of ‘horrific consequences’ of driving too fast.

Lightfoot’s SUVs have since February 2020 been involved in at least eight incidents, and since May 2021 received three speed camera tickets and two warnings, plus a red light ticket.

None of the fines – now totaling $658 – have been paid, CWB Chicago reported.

The revelations come as Lightfoot, who took over in May 2019, continues to push to lower the ‘buffer zone’ threshold that speed cameras allow before issuing a citation.

Lori Lightfoot is seen entering her official SUV. Since February 2020, the fleet of vehicles have been involved in at least seven incidents, incurring $658 in fines

It was 10mph, but she last year ordered that it be reduced to 6mph, arguing that it will make roads safer.

‘No one likes speed cameras. I get it,’ she said last month.

‘But this is life or death that we’re talking about here, and we’ve got to step up as a city and address this.’

She has also repeatedly highlighted the threat to children from speeding vehicles near schools.

‘It is unconscionable that any City Council member would consider voting to allow for increased speeds near spaces utilized by our children,’ Lightfoot said.

Last week, she added: ‘It makes no sense for us to increase the speed around the parks and schools when we know what the horrific consequences are for pedestrians and for other drivers.’

Yet Lightfoot’s official vehicles have themselves been caught speeding through school zones.

In February 2020, one of her vehicles drove past Jones College Prep at 39mph, leading to a warning being issued.

The following year, on January 21, her SUV drove through a red light at 5:45am.

On May 20, 2021, her two SUVs sped past Samuel Gompers Park at 39mph, resulting in another speed warning.

A speed camera ticket was issued, which is now at $244 and remains unpaid, the website reported.

In October 10, 2021, one of her vehicles turned left through a red light, resulting in a $244 ticket and a ‘notice of seizure’ for the vehicle.

Lightfoot’s SUV is caught on camera on October 10, 2021, going through a red light

The following month, on November 5, one of Lightfoot’s SUVs received a warning for traveling through Washington Park at 39mph, as she was on her way to a COVID press conference at a children’s hospital.

Four months later, on March 9 this year, her SUVs sped past the same location and she was sent a $70 fine – which remains unpaid.

And last month, she once again sped past Samuel Gompers Park – this time at 41mph. The $100 ticket remains unpaid.

In 2020, Chicago Tribune reported that the city of Chicago dismissed the majority of tickets that were issued to Lightfoot’s security team, which included tickets given at times the mayor was attending non-city related events.

The Illinois Policy Institute, a libertarian think tank, found that Chicago has issued 3.8 million speeding tickets, generating almost $80 million in revenue to the city since Lightfoot lowered the threshold to 6mph last year.

Lightfoot’s office insisted that she was not responsible for her drivers, and told them they needed to obey traffic laws

Lightfoot’s office said that the mayor herself was not responsible for her drivers, and ‘repeatedly stressed to the Detail traffic safety and that running red lights is never acceptable’.

The statement said: ‘The Mayor’s Detail is responsible for the safety and security of Mayor Lightfoot.

‘Members of the Mayor’s Detail are trained in a variety of safety and security techniques to keep the Mayor safe and that includes both vehicles staying in formation while en route.’

Lightfoot’s team said that the fines had not been paid because there was an ‘administrative process’ to review the fines.

‘Payment is not collected until that process is concluded,’ City Hall said.

‘Individual members of the Mayor’s Detail are responsible for payment of tickets incurred while they are driving.’