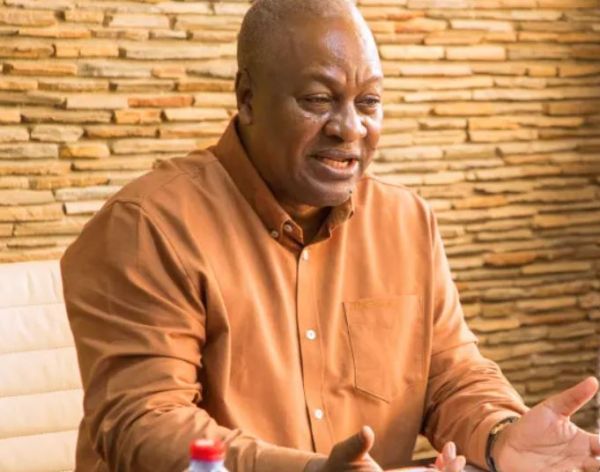 
Former President John Dramani Mahama has entreated Christians to demonstrate the virtues of their faith by loving their neighbours and sharing what they have with them.
That, he said, would help relieve the people of some of the prevailing tribulations in contemporary Ghanaian society.

Mr Mahama was speaking at a thanksgiving service by the Evangelical Presbyterian Church, Ghana (EPCG) at the Ho Jubilee Park Sunday to cap its 175th anniversary celebration.

The celebration was on the theme: “A journey of 175 years in ministry – Achievements, challenges and the way forward”.

The former President, who was the guest of honour, said it took righteousness on the part of leaders to bring relief to the people and that was what Christ did for mankind.

He commended the EPCG for holding onto the values of honesty, modesty, humility and kindness to serve humanity over the decades, saying the church’s dedication to the welfare of the people was evident in the sterling educational institutions and health facilities they had in the country.

Mr Mahama said the presence of 1000 congregations of the EPCG in the country also bore ample testimony to the ever-growing strength of the church.

He said the state must always recognise the role of the church as a crucial partner in nation building and urged the EPCG to continue to spread the message of love, hard work, and honesty, especially in present economic hardships.

The Moderator of the General Assembly of the EPCG, Rt. Rev. Dr Lt. Col. Bliss Divine Agbeko (retd), in a sermon, said even in hard times, Christians must always be agents of righteousness and always do the right thing without giving up.

He pointed out that without love and righteousness, there could not be forgiveness; he, therefore, urged Christians to let the hope for paradise motivate them to bear fruits and remain righteous even in a corrupt world.

“It is only when the righteous lead that we live in a nation of peace,” Rev. Dr Agbeko said.

He announced plans by the EPCG to build a modern conference centre with residential facilities in Ho,

in line with its commitment to service to humanity.

Present at the service were representatives from Bremen Mission, Germany; Eglise Evangelical Presbyterienne du Togo, and E.P. Church in Pakistan.

Upon a request from the former President, prayers were said for the safety of the Christian community in Pakistan.