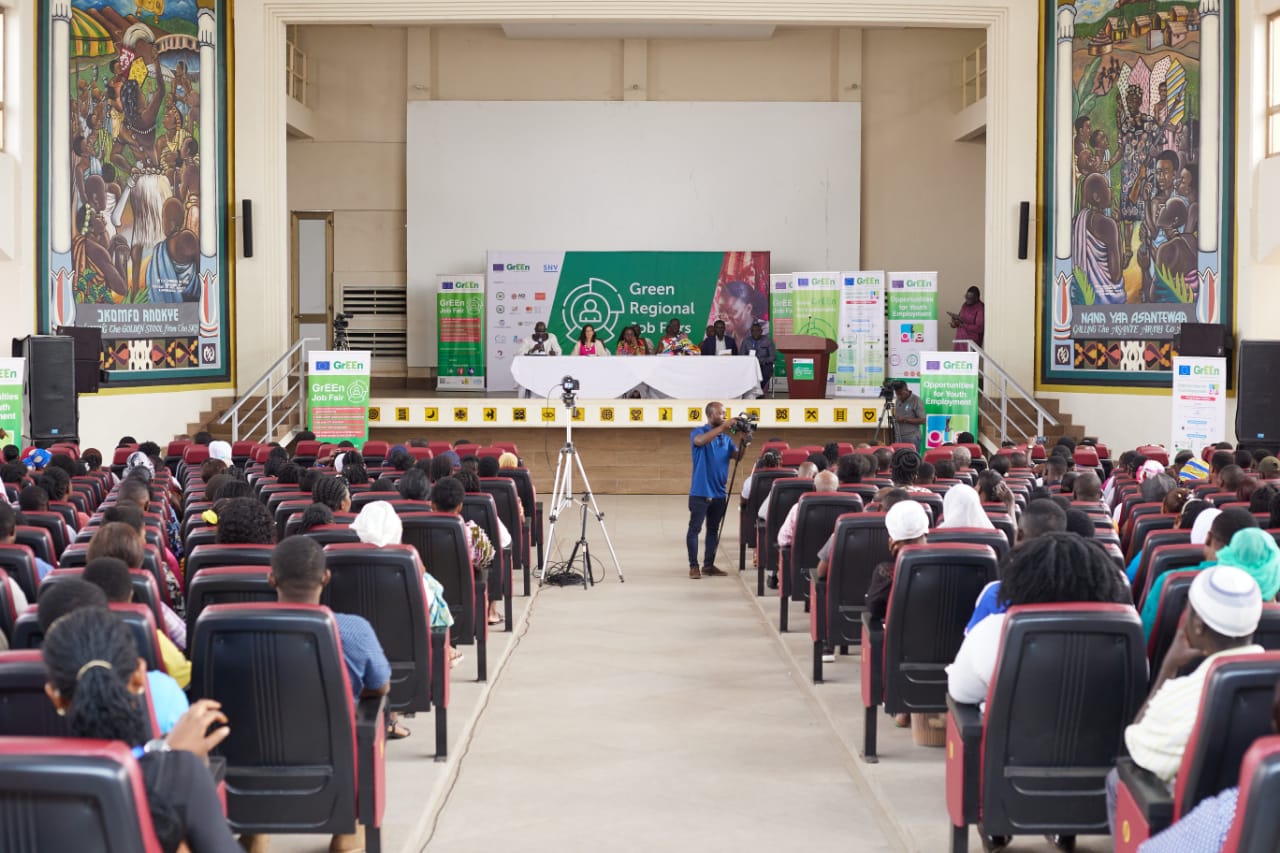 
As part of efforts to bridge the gap between employers and job seekers who are interested in environmentally-friendly businesses, SNV Ghana GrEEn project with support from the European Union has organized the 2022 GrEEn regional job fair at the Prempeh Assembly Hall in Kumasi.

The move according to SNV Ghana and the European Union is to support businesses that are climate-friendly to grow and also improve the employment situation in the country.

Over the years, youth unemployment has been a major challenge in Ghana as successive governments have been struggling to tackle it, with very few successes chalked in this regard.

Thousands of job seekers continue to scavenge for jobs even where there are none or very few vacancies due to the difficulties associated with unemployment.

According to the Ministry of Employment and Labour Relations, thousands of youth have gained employment directly through job fairs over the years, which makes it a platform for job seekers to take advantage of.

As a result, hundreds of job seekers thronged the Prempeh Assembly Hall in Kumasi to participate in the Ashanti regional edition of the 2022 SNV Ghana GrEEn job fair with the hope of securing employment opportunities.

According to some job seekers who participated in the SNV Ghana Job Fair, the difficulties they have been facing due to their joblessness have been compounded by the current economic hardship.

In the wake of the high unemployment rate in Ghana, the European Union has expressed its readiness to support various groups in supporting businesses that are into environmentally-friendly approaches to grow.

Speaking to the media, the GrEEn project program manager for European Union in Ghana, Marta Brignone noted that the European Union is committed to supporting the growth of climate-friendly businesses.

“As we know, for European Union, green transition, what we call just transition from the traditional way of living and self-production to a greener production system to a greener society is the priority. This means that in our cooperation with our countries, we apply, and we try to promote the same values that we are trying to promote within our member states. So we are very much aligned with the priorities of the country, in this case the priorities of Ghana that are well described in the National green jobs strategy. The European Union has already contributed to the development of this strategy. The strategies have four main pillars. I will say that for the future, the European Union is very much committed to supporting the implementation and mainly on supporting green entrepreneurship, entrepreneurs and to promote the green skills,” Marta Brignone, program manager, GrEEn Project, European Union in Ghana noted.

Speaking on the sidelines of the event, the project manager for SNV Ghana, Laouali Sadda, on his part noted that SNV Ghana is seeking to create more platforms to connect job seekers to employers and also support the youth and Small and Medium Enterprises (SMEs) in promoting climate-friendly practices to create jobs.

“Basically, the aim of this project is to support youth and SMEs to create jobs, green jobs specifically. So in the frame of a secular economy, the GrEEn job fair is one of the key activities the project is implementing yearly to really support youth in achieving this. The basic aim is to connect the job seekers to the entrepreneurs,” Laouali Sadda, Project manager, SNV Ghana stated.