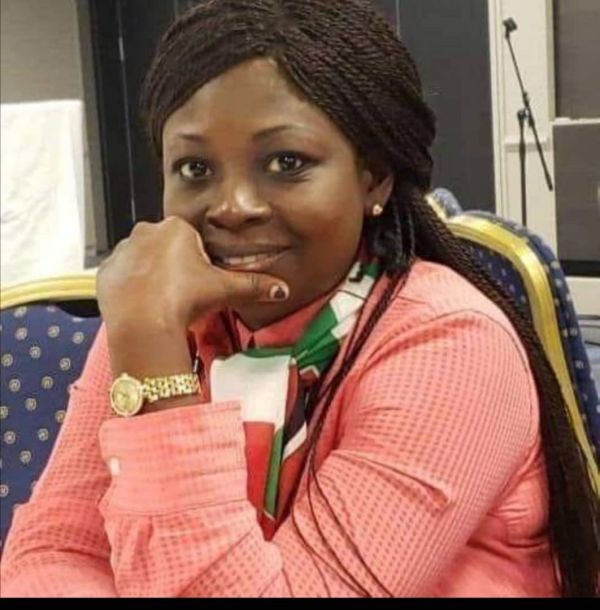 
Lawyer Barbara Serwaa Asamoah challenges the campaign team of Asiedu Nketiah to provide the names of NPP companies they claim she added to the bidding process for NDC app to collect dues..

In a release by the spokesperson of Asiedu Nketiah campaign, Edem Agbana alleged that, one of the three companies that submitted their bid per their due diligence belong to NPP big man.

But in a sharp response through a statement, Lawyer Barbara Serwaa, the deputy General Secretary of the NDC in charge of finance and administration , dare Edem Agbana, Deputy youth organiser of the party and also the spokesperson for the Asiedu Nketiah campaign team to provide name of the three companies that have close link with the npp.

Read the full statements below;

RE: Neither Johnson Asiedu Nketiah nor his son has an interest in NDC’s electronic payment platform provider.

My attention has been drawn to a publication issued by Edem Agbana purporting that I was involved in the selection of the company in charge of the collection of party dues, nomination forms fees and filing fees.

I decline this assertion emphatically and inclined to put out the facts as regarding the subject matter.

Yet I have been silent about issues leading to the selection of the vendor because I do not want the rank and file of the party to lose confidence in the system knowing the amount of energy I put into the establishment of the party’s electronic
payment system.

I do not want to be dragged into anything about internal party acrimony especially as regards recent controversies about the vendor awarded the contract.

We have a responsibility to protect this party’s image and lead well in the management of information meant for internal purposes. Since it is Edem Agbana who issued this statement, I will assume that he issued it without having adequate information, because at no point was I asked to meet Dr. Atta Boateng to assist in the selection of companies for the project.

a) Global icon Agency limited with company registration number CS199352013, submitted by Daniel Austin who is the son of the former DCE of KEEA, Thomas Austin Ankomah, from 1991 to 2000. Daniel Austin was a parliamentary aspirant on the ticket of the NDC at KEEA in the 202O NDC parliamentary primaries and at the time the Regional Director of I.T. in the Central region. It must be placed on record that he was willing to offer the software and its services at zero cost to the party.

b) ELEKSTECHIQ limited company with registration number CS099350722, submitted by Nana Grant, a known NDC member who lives in Canada and the son of Nana Addo Aikins, PNDC tribunal chairman from Akropong constituency.

However, the third company, RX-Zone Technologies, which eventually won the bid submitted their proposal to Peter Boamah Otokunor, therefore I do not have any information on that company.

At the said meeting with Dr. Atta Boateng who was invited to help evaluate the proposals by the three companies with his technical background, I handed over the two proposals that came to me for the evaluation.

The assertion that I was asked to meet with Dr. Atta Boateng separately to further review and report to the committee is a complete falsehood.

I was never invited to any other meeting again until I was invited to a finance committee meeting in the office of the former chief of staff, Hon. Julius Debrah, where the company, RX-Zone Technologies that had already been selected by a means I am not in known of did a presentation on how the app was going to operate.

I have provided the company registration details of the two companies that submitted their bids to me for anybody to check whether they have any links to any NPP bigwigs, because when they were submitted to me, I did the necessary background checks and there were no indications whatsoever that they were linked to any NPP bigwig.

The next time Edem Agbana is releasing such press statements, he should check the accuracy of the information he puts out before he tries to create any impression that I had anything to do with the company that won the bid. Our fidelity to the truth must not shift with the advent of internal competition.