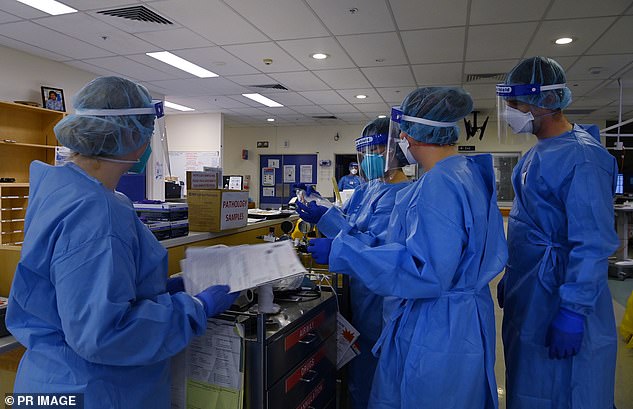 
Scott Morrison has declared ‘the days of lockdown are over’ even with Australia detecting record Covid case numbers.

The Prime Minister said the dominant Omicron variant was 75 per cent less severe than the Delta strain and could be publicly managed like other infectious diseases such as flu.

But Asked if Australia would need a ‘circuit-breaker’ lockdown to stop the surge, Mr Morrison told the Today Show: ‘No. Because it is not about numbers.

‘I keep making this point. This is a different type of variant which requires an evolution of our response.’

‘The days of lockdown are gone. We’re going forward. We’re not going back. That’s not how you manage this virus.

‘There will be high case numbers but the severity is a lot less so you focus on your hospital system.

‘I think you’re seeing that. We’ve got 51 people on ventilators around the country. 148 people in ICU.’

Mr Morrison said the vast majority of people who catch the Omicron strain, which was discovered in November in South Africa, have a mild illness that can be managed at home.

‘If you are in hospital at the moment, the primary reason for that is you weren’t vaccinated. The second reason is you’ve got Delta, not Omicron.

‘With Omicron, there is only a very small number of cases that are in hospital,’ he said.

‘We’re now dealing with a very different virus. We’ve really got to change the way we think about it and that’s why talking about case numbers now is really not the point.’

NSW hospitalisations of Covid cases reached four digits for the first time since October (pictured, ICU staff at Sydney’s St Vincent’s Hospital) – but it has emerged not all the patients are in hospital for Covid-related reasons

Last week state premiers agreed that only household contacts of a positive case must isolate for seven days in a bid to stop employees including nurses and supermarket workers from being unable to work.

‘The issue is how we’re managing the impacts on the health system and that’s why ensuring we have sensible rules that allow people to go back to work,’ Mr Morrison said.

The Prime Minister also revealed he will talk to the premiers this week about agreeing on a definition of Covid hospitalisation amid fears the numbers are artificially high and giving a false picture.

‘There are people being counted as being in hospital for Covid when they didn’t go there for Covid, they went there for some other reason,’ Mr Morrison said.

‘They’ve been tested when there and been found to have Covid. We need to get a standard definition on that because these are the key things we have to track.’

He concluded by saying Covid will eventually be treated like flu and Australians can move on with their lives.

‘We can ultimately manage this like any other infectious disease. That’s the pathway out,’ he said.

Data shows as many as 50 per cent of ‘Covid patients’ in NSW hospitals were actually admitted for other reasons – such as a broken leg, labour pains or even mental health issues – and later tested positive to the virus during routine tests.

As of Sunday morning, there were 1,066 people with Covid in hospital in NSW, with 83 in ICU.

NSW Health Minister Brad Hazzard has admitted that over two days during the week, up to half of those cases were in hospital for something else entirely – raising questions about how hospitalisation figures are reported.

‘A reasonable proportion of cases being classified as Covid hospitalisations are actually people with other reasons for admission,’ Mr Hazzard said.

‘Heart attacks, births, falls, none of that stops just because there is Covid. They come into hospital, they have a swab taken and it confirms Covid.

‘This shows us its out in the community, but we aren’t necessarily seeing that as the primary reason for all of the admissions.’

Queensland and NSW officials say about 80 per cent of cases are the Omicron variant while in Victoria the figure is about 70 per cent.

Hospitalisations are also on the rise in Victoria with 472 cases currently admitted.

However, only 52 are in ICU compared to 83 just before the new Omicron variant hit Australia’s shores.

Who should get a PCR test? Anyone who has symptoms or who has got a positive rapid antigen test

New definition of close contact: Someone who has spent at least four hours in a household or a care facility with a positive case. Workplaces do not count.

New isolation period: Positive people and close contacts must isolate for seven days or 10 in SA. This is regardless of whether the close contacts test negative or not

Tasmania followed on January 1 while the Northern Territory and Western Australia will not adopt the scheme until they get more Covid cases in the weeks ahead.