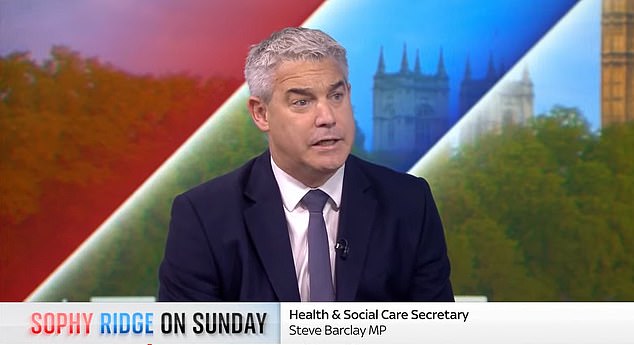 
The Tories descended into a fresh bout of Brexit wars today as ministers warned they will not back a push for ‘Swiss-style’ ties with the EU.

Government sources have been signalling that Switzerland’s relationship with the bloc could be a model for the UK over the next decade.

However, despite claims free movement would not return there are fears the UK could end up accepting EU law, paying into Brussels coffers and facing higher immigration.

Health Secretary Steve Barclay tried to pour cold water on the reports in the Sunday Times this morning, telling Sky News‘ Ridge on Sunday programme: ‘I do not support that. I want to maximise the opportunities that Brexit offers.’

Mr Barclay pointed out that Mr Sunak himself was a strong Brexiteer.

Tory MPs warned against a ‘betrayal’ of the 2016 referendum result. Former Cabinet Minister Jacob Rees-Mogg said the Conservatives are a ‘Brexit party’ and would risk becoming a ‘non-Brexit party’ if it agreed to ‘unfettered’ trade with the EU.

Chancellor Jeremy Hunt raised eyebrows last week by saying he wants to remove trade barriers with Brussels as part of efforts to boost the economy.

Although he stressed that did not mean rejoining the single market, sources told the Sunday Times that Switzerland’s arrangements could be a model.

A Government spokeswoman said: ‘These reports are categorically untrue. This Government is focused on using our Brexit freedoms to create opportunities that drive growth and strengthen our economy.

‘Brexit means we will never again have to accept a relationship with Europe that would see a return to freedom of movement, unnecessary payments to the European Union or jeopardise the full benefit of trade deals we are now able to strike around the world.’

Health Secretary Steve Barclay tried to pour cold water on the reports of a Swiss-style approach, telling Sky News’ Ridge on Sunday programme: ‘I do not support that. I want to maximise the opportunities that Brexit offers.’

Former Brexit opportunities minister Jacob Rees-Mogg said: ‘This would be Brexit in name only – it would basically take the teeth out of Brexit and does not even replace it with dentures’

The speculation emerged as the UK remains in deadlock talks with the EU over the Northern Ireland protocol.

Switzerland and the EU have a close economic relationship based on a series of bilateral agreements, giving the country direct access to most of the EU’s single market – but without being in the customs union.

It accepts free movement of people, but the source told the newspaper they believe it would not be necessary for the UK.

CBI chief Tony Danker urged ministers to focus on implementing the existing trade deal with the EU rather than tearing it up.

‘There’s not a lot of great growth prospects for the country and the government can’t afford to pump prime the economy like they used to,’ he told the BBC’s Sunday with Laura Kuenssberg.

‘So it’s no surprise that we’re starting to look to other ways to grow the economy that don’t cost money.

‘One obvious place is, can we improve trade with Europe? The problem is we’re not currently even implementing Boris’s deal.

‘So I don’t think we need to talk about Switzerland. We need to first talk about can we implement the Boris deal which has more opportunity we’re not capturing because of the Northern Ireland protocol.

‘Rather than talking about Switzerland I think the government need to talk about Northern Ireland, improved trade with Europe, that will help us grow.

‘That stuff, maybe we can come back to that in another decade. But I think we need to solve the Northern Ireland problem first.’

One MP told The Mail on Sunday: ‘It didn’t take long for the mask to slip.

‘This is a total betrayal. The ERG must fight this tooth and nail.’

Mr Rees-Mogg said: ‘This would be Brexit in name only – it would basically take the teeth out of Brexit and does not even replace it with dentures.

‘The Conservative Party is a Brexit party and it cannot become a non-Brexit party.’

Tory MP Peter Bone said: ‘The party wouldn’t wear this. If you’ve fought an Election to get out of the EU, you’ve won an 80-seat majority and you’ve won a referendum on it, there is no chance that this would be acceptable.

‘If the Government tried to do this the party would split both within the House of Commons and the country. It’s pure madness. Having said that, I’ve not heard a single person suggest it.’

Mr Jones added: ‘The fact is that Switzerland is involved in perpetual negotiations with the EU on every facet of market rules. We simply cannot accept that here.’

Switzerland has access to the European single market, a deal on freedom of movement of people, and makes payments to the EU budget.

This was also an approach that Mr Johnson and Lord Frost, his chief Brexit negotiator, ruled out when they drew up the UK’s negotiating mandate in 2020.

Lord Frost told the Sunday Times: ‘Any approach requiring the UK to align with EU rules to get trade benefits, whether as part of a Swiss-style approach or any other, would be quite unacceptable.

‘Boris Johnson and I fought very hard to avoid any such requirements in 2020 and ensure the UK could set its own laws, and we should not contemplate giving this away in future.’

Jeremy Hunt, the chancellor, has signalled that Rishi Sunak’s administration intends to break from the approach adopted by Mr Johnson and remove the vast majority of trade barriers with the bloc.

In private, senior government sources have suggested that pursuing frictionless trade requires moving towards a Swiss-style relationship, the paper reported.

‘I think having unfettered trade with our neighbours and countries all over the world is very beneficial to growth,’ he told the BBC Radio 4 Today programme.

‘I have great confidence that over the years ahead we will find outside the single market, we are able to remove the vast majority of the trade barriers that exist between us and the EU. It will take time.’

The plan, designed to foster closer economic ties with the bloc, would represent a major break with the approach adopted by Boris Johnson

His comments caused alarm among members of the European Research Group (ERG) who led the battle for Brexit.

The group also fears that the government is preparing to give ground to Brussels to resolve the disagreement over the Northern Ireland protocol.

A Downing Street source told the paper that Mr Sunak was ‘taking the fight’ to the EU but was also hopeful that a more constructive approach on both sides could bear fruit.

‘Rishi wants to get this sorted as quickly as possible; there’s definitely a deal to be done,’ a No 10 source said.

‘It’s our team’s sense that there is much more of a landing zone, in terms of what we would be happy with, than there has ever been.’

But they added: ‘He’s taking the fight to them. He’s not going to be giving up stuff that he and the party would not be happy with him giving up.’