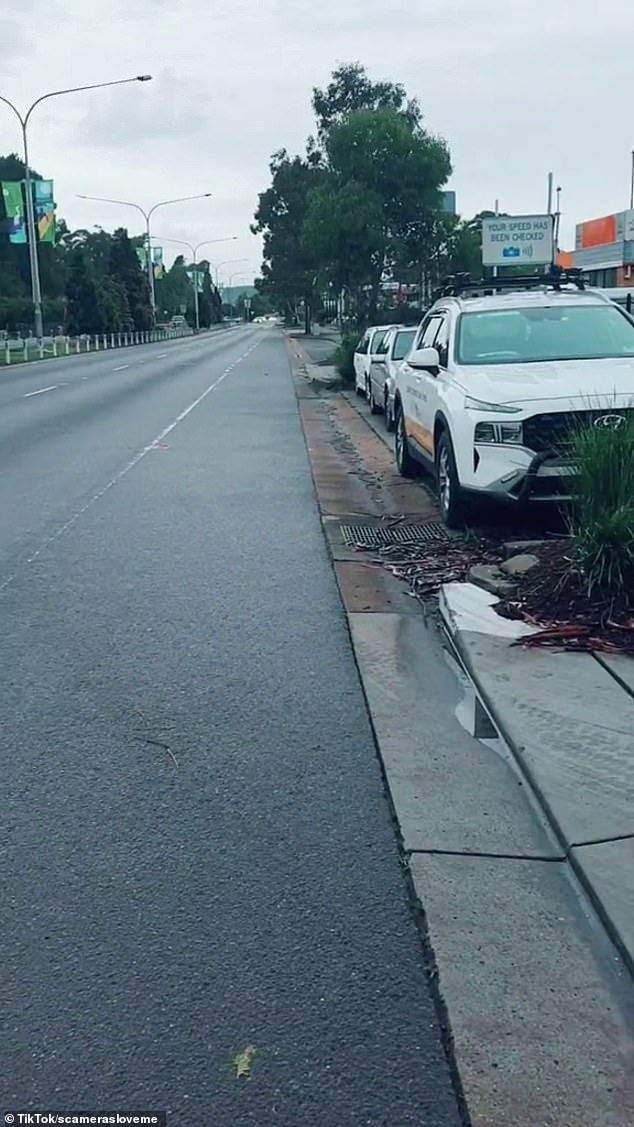 A teenage boy who crusades against speed camera traps in his spare time has exposed a new sneaky tactic being used against Australian motorists.

Beau Jackson, 17, shared a video on Wednesday morning showing a speed camera parked amongst several cars of the same colour – and hidden behind a tree – on the NSW Central Coast.

Beau wakes up six days a week and uses the Waze app to track down speed cameras in his local area.

He then puts up signs alerting oncoming motorists they’re at risk of being pinged.

In the video he put up on Wednesday morning, it showed the speed camera vehicle (pictured) parked amongst other cars of similar colour along the Tuggerah Straight on the Pacific Highway

Beau said after he parked about 400metres behind the speed camera vehicle, ‘almost every car honked and waved, some (drivers) screamed that I was a legend.’

‘They are definitely getting more sneaky and are parking in most places where their signs are hidden,’ Beau claimed.

Beau has made a name for himself with a makeshift sign warning unsuspecting motorists about potential speed traps.

Rail, hail or shine, the teen spends most days before and after work parked in locations where he feels cameras are ‘unfairly’ trying to catch people to raise revenue – such as at the bottom of hills, or in places where the speed limit suddenly drops.

Other recent incidents included last month when he came across an unmarked trailer hidden around a corner fitted with what looks like two speed cameras with another two mobile detection cameras attached in the Newcastle suburb of Merewether.

He described the device as ‘new camera technology, which doesn’t involve an operator, and is unmarked’.

The road vigilante was also confronted by a grouchy middle-aged woman who demanded he stop warning drivers near her home.

Beau was parked down the street from where she lived and stayed there for three hours until the mobile speed camera moved.

‘She asked me to move because she was sick of the honking,’ he told Daily Mail Australia.

‘I told her I was only parked there because the speed camera van was parked a few metres in front of me.’

Mr Jackson tried to explain he was trying to warn drivers about ‘unfair’ speed cameras, but the woman (pictured left) didn’t care

The woman was unfazed about his mission to save Australians from spending hundreds of dollars in speeding tickets and continued demanding that he move.

When he continually refused, she started taking photos of Mr Jackson and his bike.

‘So I started taking photos of her,’ he recalled.

‘She backed right off when I did that, and then she starting making phone calls.’

The teenager has no idea if anything came of her phone calls because the speed camera van left ten minutes after she got off the phone.

Beau, who insists he’s never been fined for a speeding offence, agrees motorists who are ‘dramatically’ over the speed limit should be punished.

‘They think I’m doing the community a service as I’m actually making people slow down,’ he added.