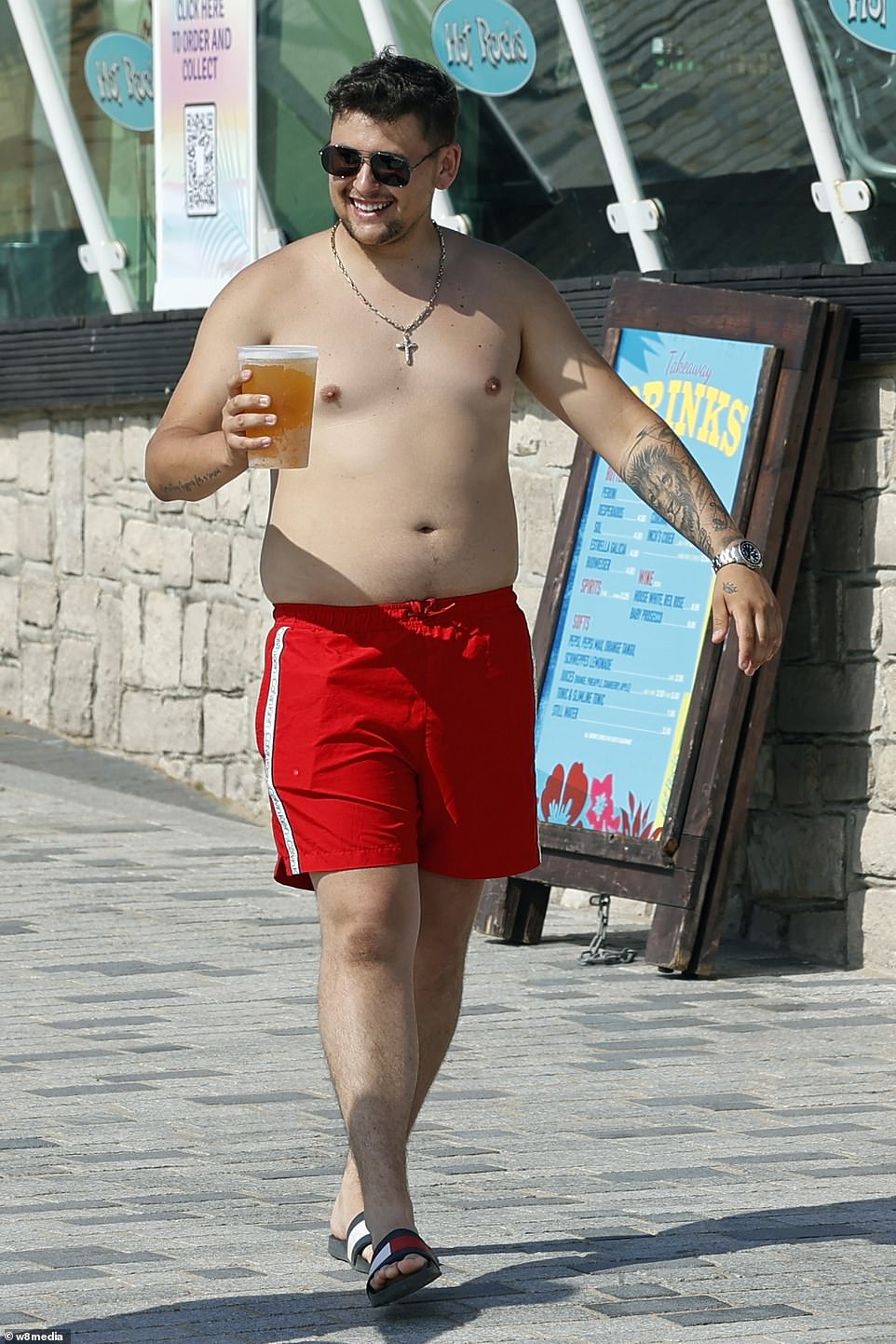 
Britons are looking forward to a balmy bank holiday weekend with temperatures set to peak in the mid-20s as revelers at Leeds and Reading festivals enjoy 25C heat.

Latest forecasts show the UK will remain dry this Bank Holiday, providing some final good weather before the return of schools at the start of September.

Festivalgoers in Leeds and Reading are enjoying Celsius temperatures in the mid-20s with no wellies or mud in sight.

There’s good news for everyone in the UK into next week too, as temperatures will warm before slightly more unsettled weather arrives from the west next weekend.

Widespread sunshine on Sunday and Monday will only be dampened by isolated showers on Saturday, in ‘average’ conditions that holidaymakers can rely upon, the Met Office said.

For the tens of thousands of festivalgoers and attendees expected at London’s Notting Hill Carnival, dry weather will be a relief as Britons enjoy the end of summer with no coronavirus curbs.

But for the ten regions in drought, weather will remain ‘very, very dry’, the Met Office forecasts.

And motorists are being warned to expect considerable disruption as millions take to the roads. Two million people are expected to celebrate Notting Hill Carnival in London alone.

Holidaymakers make the most of a trip to the beach in Bournemouth today, ahead of the return of schools next month

Festivalgoers arrived at Leeds Festival this morning, dressed for warm weather and ready for a weekend of partying

Leeds revelers have already enjoyed top temperatures of 25C, and will continue to enjoy a burst of sunshine at the end of summer

Festivalgoers enjoy the music at Leeds festival yesterday, with the sun and dry weather set to continue throughout next week

Revelers during the Leeds Festival 2022, which is currently taking place at the city’s huge Bramham Park

It may be hot at Leeds, but regular attendees at music festivals know that solid footwear is one of the most important things to have

A Met Office spokesperson told MailOnline: ‘For much of the UK, high pressure will dominate the Bank Holiday weekend.

‘We will see plenty of dry weather and sunny spells over the next few days. On Saturday, The UK will be mainly dry, with maybe a risk of just one or two showers.

‘It will be a bit cloudier in Scotland and Northern Ireland, with a risk of patchy rain across western Scotland.

‘Maximum temperatures will be about 25C, so it will be feeling pleasant in the sunshine.’

Turning to Sunday, maximum temperatures remain at 25C. The spokesperson said: ‘It will be dry overnight into Sunday. There is a risk of one or two showers on Sunday, and it will again be cloudier in Scotland and Northern Ireland.

‘On Bank Holiday Monday, there is a bit of a split between the south west and north east. It will be cloudier overall but the best of the sunshine will be seen in western areas such as Wales.

‘Further north-east it will be cloudier with a higher risk of showers, particularly in the north east of England.

‘Temperatures will be a bit chillier in the north under the cloud, we’re looking at in the teens to low 20s, but we will still see high temperatures of up to 25C in the south east and south west.’

If this happens, it will make the UK as hot as Lisbon, Portugal.

Tens of thousands of revellers will attend the Reading and Leeds festivals between Friday and Sunday, with the rapper Dave and the Arctic Monkeys among the headliners.

Meanwhile, the Notting Hill Carnival in west London will return from Saturday to Monday for the first time since the pandemic, with two million people expected to celebrate.

As well as sunglasses and sunscreen, all sorts of hats are on show this weekend to protect from the bright sun

As of Wednesday, the UK had only 46 per cent of the average total rainfall for August and 30 million people are currently living under a hosepipe ban

Going into next week high pressure will hold on with largely settled weather. But the Met Office does forecast more unsettled weather by next weekend coming in from the west. This could result in wetter and windier weather.

Although dry weather is good news for those at Leeds and Reading, it’s bad news for the UK’s ecosystem.

As of Wednesday, the UK had only 46 per cent of the average total rainfall for August and 30 million people are currently living under a hosepipe ban.

The ongoing dry weather has seen drought declared across swathes of England, with parched grass and struggling crops, streams drying up and river, reservoir and aquifer levels low, and hosepipe bans brought in for millions as heatwaves pushed up demand for water.

Forecasters are yet to spot a sustained period of above-average rainfall, which is needed to end the drought.

Frank Carter, from Frank Carter and the Rattlesnakes, crowd surfs on the first day of Reading festival yesterday

Popular acts at Leeds include The 1975, who headlined yesterday (Pictured: Matty Healy of The 1975) and the Artic Monkeys, who will perform tomorrow

Revelers faced few problems getting to the festival on Friday, but are being warned to expect delays on travelling back at the end of the weekend

As tens of thousands of people gather at festival stages this weekend, Notting Hill Carnival will also kick off

Local businesses prepare for the first Notting Hill Carnival since the pandemic, which is expected to see two million people attend

Meanwhile motorists are being warned to expect widespread disruption ahead of another weekend of busy travel.

Bank Holiday travellers could face a weekend of chaos as half of drivers take to the roads and rail engineering works affect major routes.

It comes after train stations, airports and motorways were packed yesterday with people trying to make the most of the long weekend.

The AA and RAC last night warned of potential gridlock on some key motorways and major A-roads across the Bank Holiday. Network Rail also warned train passengers to check before they travel as track and signalling upgrades mean several lines will either be closed or have reduced timetables.

Tens of millions are set to be on the move over the next three days due to a bumper weekend of events. Reading and Leeds festivals began yesterday, with Notting Hill Carnival in west London starting today.

The Birmingham Weekender and Cardiff and Manchester Pride events are also taking place.

Of around 15million drivers expected to take to the roads this weekend, an estimated 4.2million set off yesterday. At least another 2.3million are expected to get in their cars today.

Yesterday, huge queues of vehicles built up travelling southbound on the M5 motorway past Bristol, and big waits met getaway traffic on the M25 near the Dartford Crossing in Kent.

The RAC’s Rod Dennis said: ‘We’re expecting busy roads to continue throughout this bank holiday weekend, especially to major holiday destinations with people eager to enjoy some time away before the new school terms begin in England and Wales.’

In a fresh blow for rail travellers after crippling strikes, there will be reduced timetables and bus replacement services on swathes of the network due to the £90million engineering works project.

There will be no trains from or to Charing Cross station in London for three days. There will also be disruption on the West Coast Main Line, which links the capital with the Midlands and North, between Euston and Northampton.

Share. Facebook Twitter Pinterest LinkedIn Tumblr Email
Previous ArticleUvalde: How lessons from Columbine went unheeded in Texas massacre
Next Article “It’s a taboo for my wife to earn more than me” – Man asks wife to quit her job