How Adom-Otchere revised KIA Xmas decor spending up by GHC10,000 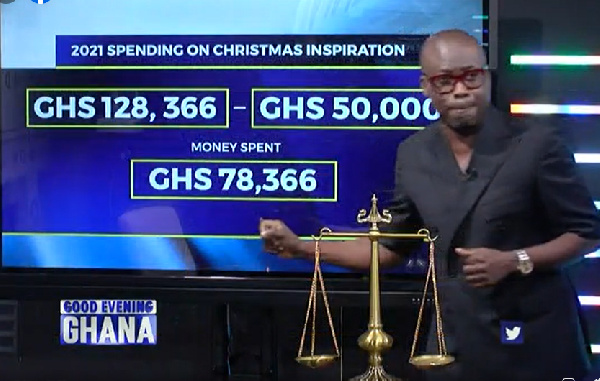 He is board chairman for Ghana Airports Company Limited

Paul Adom-Otchere, the Board Chairman of the Ghana Airports Company Limited (GACL), has in the last few days had cause to defend spending that the board authorized on Christmas inspirations at the Kotoka International Airport, KIA.

His first reaction came barely 24-hours after an invoice addressed to him began circulating on social media. In his reaction via a Facebook post, Afom-Otchere stated six facts in defence of the spending.

Two of the facts spoke to the figures involved in the inspirations and read as follows: “FACT: The beautiful Christmas tree standing at Terminal 3 and 3 others altogether cost GHC 34,000, which was graciously provided by Jandel Limited at a heavy discount. (We thank Jandel Limited)

“FACT: The other inspirations were provided by Favors and Arts for a total cost of GHC 84,000 out of which GHC 50,000 was obtained via sponsorship.”

On Tuesday, January 12, 2022, edition of his biweekly programme, Good Evening Ghana, Adom-Otchere mounted yet another defence to better explain the amount that went into the project.

Per his new calculation, the total amount of money spent on inspirations for two terminals, 2 & 3, at KIA came up to GHC128,366.

The company he restated called the advertisers and requested sponsorship that was paid in cash to the tune of GHC50,000 from DPP agency because of the representation the board had made.

“This is the figure of what was spent, not what has been bandied around. I have seen a Graphic Online story that says 118 was spent and this is correct when you do the math of the total cost minus the sponsorship that we gained for the company,” he stressed.

He also explained in the interview that the invoice bearing his name was not used by the company.

Earlier in his Facebook post, he had stated thus: “It is ridiculous for anyone to say that the invoices from these two reputable companies were issued in the name of the Board Chairman, that just means the author of such spurious allegations has insufficient acquaintance with corporate workings.”