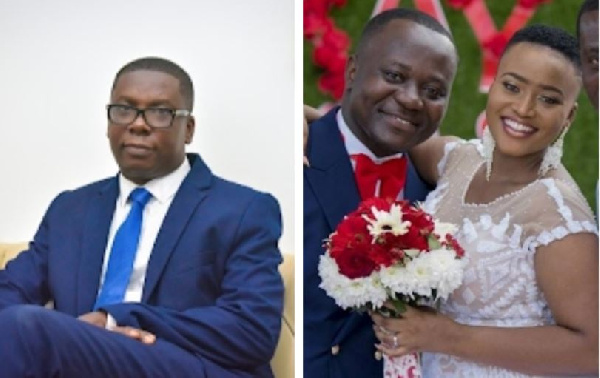 Dr Gideon Boako has been accused of leaking TT’s audio

Gideon Boako, an aide to Dr. Mahamudu Bawumia, has alleged that the former Multimedia and Media General journalist decided to ‘kill’ a story she was doing on Psalm Adjeteyfio‘s audio begging for leftovers from her kitchen.

He explained that he pleaded with MzGee’s husband, Raymond Acquah, who works with Joy FM, that he should tell his wife to put the story on hold till he (Boako) investigates the issues the actor has been raising in the voice note.

But in the latest twist to the issue, Dr. Boako, has been blamed by the media personality for leaking the voice note of the popular actor which was sent to him in private.

In a reaction to some curses rained on him by MzGee, Dr. Gideo Boako wrote on his Facebook timeline, “wherefrom this needless rant from MzGee. I don’t know you and have never dealt with you in my private or public life. It is your husband that I have a working relationship with because of the work I do.”

Dr Boako explained, “your husband shares an audio with me in which a voice similar to that of the famous TT is speaking to someone (known to be you). Listening to the audio for the first time I struggled to understand what it was meant for.

“Your husband graciously explains the import of it to me in a telephone conversation to the effect that TT had alleged that he is being denied support because of the assistance from the Vice President and some other people including the greater Accra regional minister.

“I told your husband that cannot be correct and therefore he should not publish the audio and I will delve into the matter. As at the time, your husband made me understand you had done a story on it but he is going to ask you to put it on hold. I thanked him,” he stressed.

He further stated that, days after their conversation, Raymond Acquah drew his attention to a publication on the said audio and, “I expressed shock and worry because I thought we agreed the content was not accurate and so should not be published.

“He made me understand it was not from you or him but someone on Peace FM had used it during an entertainment show and got it published online by a portal. I requested for the link and your husband sent to me. I told your husband I did not share it and so we should investigate.

“I contacted two different persons at Peace FM, including our correspondent at the Jubilee House from Peace FM, Pious. I have not yet received information as to how they got it. Now you hurriedly come out to say I leaked it for political gains. Where is the political gains in this to me or my outfit? You may want to check your trails right and stop the malicious propaganda,” Dr. Gideon Boako concluded.

Psalm Adjeteyfio, the popular actor in ‘Taxi Driver’ TV series in a voice note to MzGee stated that, all those who promised to him withdrew after the Vice President sent him GH¢50,000 following a viral video that saw the actor cry for help.

The situation, TT said, has created a lot of problems for him.

He further told MzGee that, he has made some investment with the GH¢50,000 Dr Bawumia sent him and it will take some time for him to enjoy the benefit from the investment.

“MzGee good afternoon, I’m wondering if you would have some leftovers in your kitchen to spare. [The] reason is, people who use to help have all withdrawn their help when they heard that the Vice President had given me the money. But you would agree with me that [with] such monies, you need to invest wisely and that is what I have done and when you make investments too, it will take time before you begin enjoying it,” the Taxi Driver TV series actor explained.

“Right now, the situation has created a lot of problems for me; you know, a lot of people used to help me a lot but now everybody…I even understood that some people contributed some money in States to be sent to me; the moment they heard [that the Vice President had given me the money] everybody went for his money,” Psalm Adjeteyfio added.

Many had called out the media personality for leaking a private conversation with the actor but she has denied doing such a thing and stated that the voice note in question was only sent to Dr Gideon Boako of the Vice President’s office and if he is the one who leaked it for political gains then “…may God show him and his cohorts what it feels like to put to be out for ridicule! May he never find sleep! May peace elude his home!”