Couple and their two children die in ghastly accident in Abia 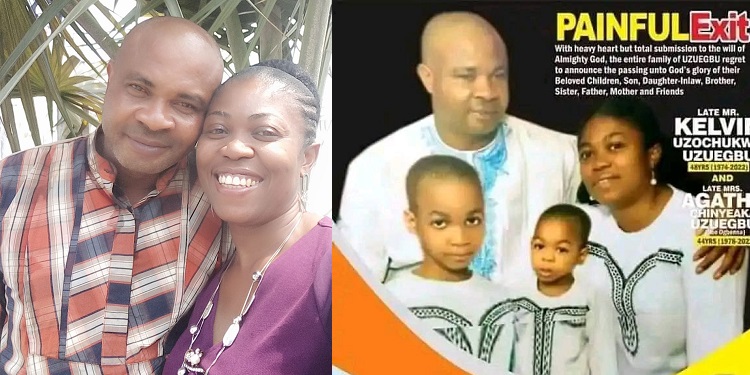 
A couple, Kelvin Uzochukwu and Agatha Chinyere Uzuegbu, and their two children have lost their lives following a ghastly car accident in Umuahia, Abia State.

According to reports, the couple and their children were traveling in their family car to Port Harcourt, Rivers State, after attending a wedding in Umuahia, when the collision happened.

The Uzuegwus tried in vain to avoid hitting an unidentified woman who was dashing across the road. The woman was said to have died on the spot.

Two other members of the Uzuegwu family were seriously injured in the crash and were rushed to the Federal Medical Center (FMC), Umuahia.

The family who died in the accident, which happened at Osisioma Junction on the Enugu-Aba-Port Harcourt Expressway in August 2022, will be buried in Umuokpe Itaja Olokoro village in Umuahia, Abia State, on November 18, 2022.

In other news, popular Nigerian rapper and actor, Ikechukwu Onunaku has taken to his Instagram page to raise alarm about his mental health.

The actor, who got married in May 2021, shared a post with “I’m not alright” boldly written on it on Thursday morning, November 17. However, he didn’t share more details about his condition.

He tagged music executives, Don Jazzy and Johnny Drille, to the post and wrote, “Shey u wan know. Oya na I don tell you. After una go say na joke. I’m not alright”

Moments after the public outcry, Ikechukwu said he received several DMs from people asking him to delete the post but he won’t take it down.

Share. Facebook Twitter Pinterest LinkedIn Tumblr Email
Previous ArticleIs this Britain’s most DANGEROUS zebra crossing?
Next Article Kwadwo Sheldon Heaps Praises On His Granny Who Sold Her Clothes To See Him Through School As He Features In BBC Documentary