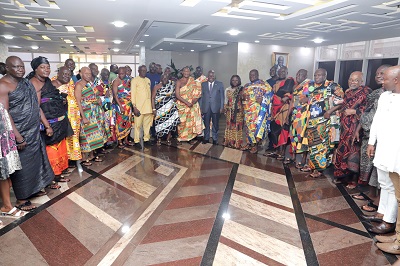 
President Nana Addo Dankwa Akufo-Addo has expressed worry over the toll chieftaincy conflicts are exacting on the public purse.

According to the President, the government wastes too much money on resolving needless and avoidable chieftaincy conflicts.

In a meeting with a delegation from the Ahafo Regional House of Chiefs at the Jubilee House in Accra yesterday, President Akufo-Addo said violent chieftaincy clashes was a major concern to the government.

He noted that the government spent so much deploying security forces and taking extra security measures in areas of chieftaincy disputes in the country.

He, therefore, appealed to all the regional houses of chiefs to help resolve the problem by codifying succession lines to help avoid conflicts.

“I went to Kwahu recently for the Easter festival and I was amazed with what the traditional authorities are doing there.

“They have developed the Kwahu State Book which has set out the genealogy of all the royal families in the Kwahu State and the stools to ensure that in future, they can follow succession plans without problems,” he said.

President Akufo-Addo urged traditional authorities in the country to follow the example of the Kwahu State Book and codify the royal lineages.

“Whenever we go for our daily security meetings, half of the meetings are devoted to chieftaincy matters,” he said and added that apart from the issue of public disturbances, chieftaincy disputes had led to many deaths and destruction of several properties.

President Akufo-Addo pledged to address the development challenges in the region, including lack of roads and facilities in the schools in the area.

The president of the Ahafo Regional House of Chiefs, Nana Ansah Adu Baah II, said the greatest challenge confronting the region was the poor road network.

“We will be grateful if the road network can be improved,” he said and presented a litany of challenges confronting the region to the President.