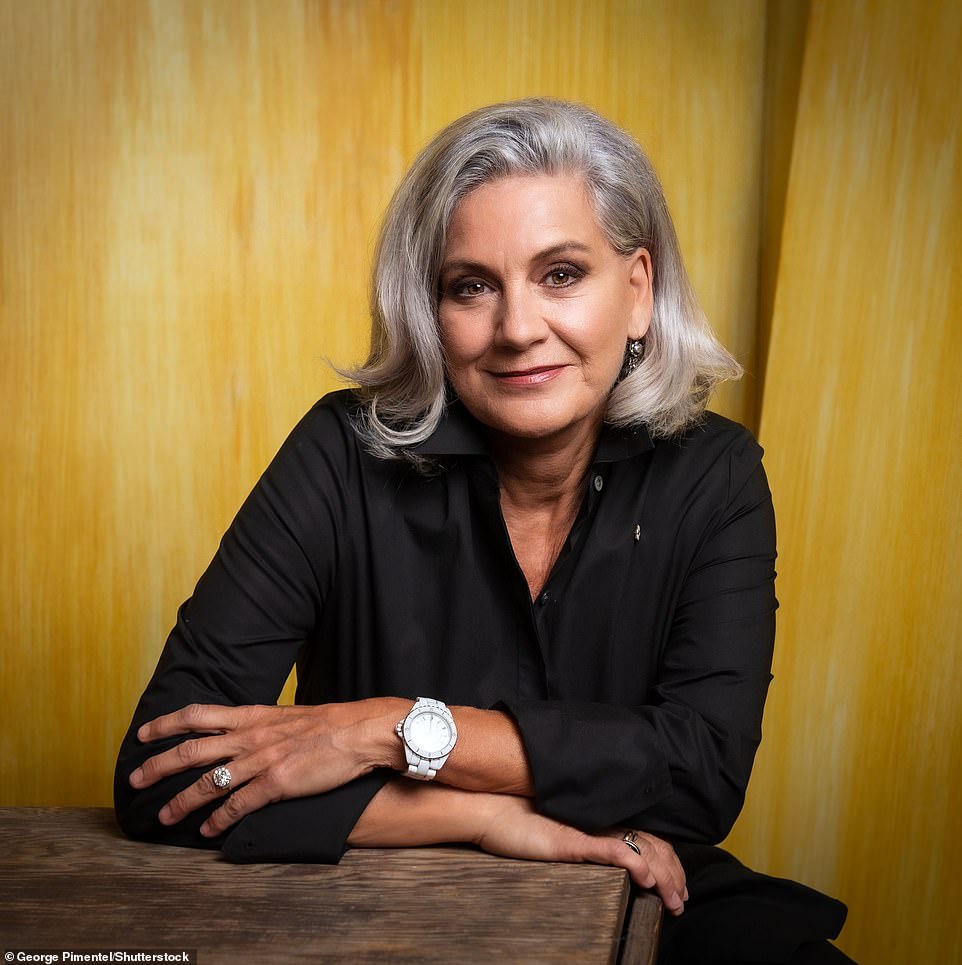 Former Nightly News host Lisa LaFlamme, 58, of Toronto, was let go by the CTV News on June 29 after the company made a ‘business decision’ to abruptly end her contract after 35 years.

‘I guess this is my sign off from CTV,’ LaFlamme said in a farewell video posted to Twitter on August 15. ‘While it is crushing to be leaving CTV National News in a manner that is not my choice, please know that reporting to you has been the greatest honor of life.’

It has been largely speculated that she was let go from the major network after she decided to let her hair go gray during the pandemic, causing major businesses – such as Wendy’s Canada and Dove Canada – to publicly support her and all women through the aging process.

However, Bell Media – which owns CTV – said that narrative was incorrect, but declined to provide the real reasoning behind it.

‘The narrative has been that Lisa’s age, gender or gray hair played into the decision. I am satisfied that this is not the case and wanted to make sure you heard it from me,’ CEO Mirko Bibic wrote on LinkedIn.

‘While I would like to say more on the Bell Media decision, we are bound by a mutual separation agreement negotiated with Lisa, which we will continue to honor.’

LaFlamme was not allowed to give an on-air farewell and was under a confidentiality contract until the ‘specifics of my exit could be resolved,’ which has since ended. She thanked her fans for spending 35 years watching her tell stories and said she ‘thought I’d have more time’ to do so

Former Nightly News host Lisa LaFlamme, 58, of Toronto, was let go by the CTV News on June 29 after the company made a ‘business decision’ to abruptly end her contract after 35 years. It has been largely speculated that she was let go from the major network after she decided to let her hair go gray during the pandemic

Before Lisa LaFlamme, 58, was terminated on June 29, Danielle Graham was let go.

Graham, who did not speak out about her firing until after LaFlamme’s case gained traction, claimed she was fired for bringing forth a gender discrimination claim.

The former host claimed she made it clear to management on March 1 that she was ‘being discriminated against as a woman’ and that she was ‘ignored and laughed at.’

Shortly after filing a formal complaint with HR, she was ‘re-scheduled to be in the office for a “shoot.”

‘As I was getting ready in my office, I was suddenly told my management “your services are no longer required.”

‘I was told it was a “business decision.”‘

Graham was also not allowed to make an on-air goodbye and claimed she was only given ‘three months severance [pay] for my 17 years there.’

The head of CTV Michael Melling has also been accused of being the one to question LaFlamme’s decision to stop dyeing her hair and for interfering with CTV’s news coverage following her exit.

Bibic announced that Melling is ‘on leave effective immediately’ and is under a workplace review.

However, many fans of LaFlamme are demanding he hand over his resignation immediately and have called him a ‘sexist jerk.’

A petition has even begun, calling for his removal and claiming he is ‘responsible for ousting LaFlamme.’ It has more than 2,400 signatures so far.

‘When people dare to speak out, they no longer work for the company,’ the petition said.

Former CTV host Danielle Graham also spoke out about her own termination from Bell Media after LaFlamme’s farewell video, stating the company fired her after she brought forth a gender discrimination claim.

She, too, was told her termination was a ‘business decision.’

Both women were not allowed to give an on-air farewell.

‘For 35 years, I have had the privilege to be welcomed into your homes to deliver the news on a nightly basis, so I felt you should here this directly from me,’ LaFlamme said in her farewell video. ‘I was told Bell Media made a “business decision” to end my contract, bringing a sudden close [to] my long career with CTV News.

‘I was blindsided and I’m still shocked and saddened by Bell Media’s decision.’

She also revealed she was under a confidentiality agreement until the ‘specifics of my exit could be resolved,’ which has since ended.

The veteran journalist has covered major historical events for CTV, such as the Iraq, Afghanistan, and Ukrainian wars, Hurricane Katrina, the COVID-19 pandemic, and the recent Jubilee in the UK.

‘This is a trust I’ve never taken for granted, as a reporter and as an anchor,’ she said. ‘At 58, I thought I’d have more time telling the stories that impact our daily lives, but instead I leave CTV humbled by the people who put their faith in me to tell their story.’

Since posting her sadden farewell, many have come to support the journalist, including Wendy’s Canada, who changed its iconic logo from red hair to gray hair, writing: ‘Because a [star] is a [star] regardless of hair color. #LisaLaFlamme.’

The company received an incredible amount of support for their bold decision and Dove Canada followed suit, launching a campaign called Aging is Beautiful.

‘Aging is beautiful. We should all be able to do it on our own terms, and without any consequences,’ the beauty brand wrote on Instagram.

LaFlamme  has not publicly spoken about the true reasoning she got fired, as it still confidential, according to Bell Media

The CEO of Bell Media Mirko Bibic said the allegations she was fired for not dyeing her fair were false, but declined to comment on the real reason

Canada’s National Observer’s Max Fawcett pointed out that CP24, a television network and owned by Bell Media – posted an article saying ‘brands should be wary when jumping on hot topics’ after LaFlamme’s termination made headlines

It also announced it was donating $100,000 CAD to Catalyst – ‘a Canadian nonprofit organization dedicated to helping build inclusive workplaces for all women.’

DailyMail.com has contacted Wendy’s Canada and Dove Canada for comment.

The Globe and the Mail also published a open letter from prominent Canadians in its newspaper about LaFlamme’s firing, where a large group of people slammed the company for firing her over ‘the color of her hair.’

‘As Canadians, we are, at our core, a fair and reasonable people. We understand well that mistakes get made by all of us; even very big corporations,’ the letter read. ‘But we also believe that it is not the mistake that maters, but rather how we respond to that mistake. And that is where Bell has failed for the second time.

‘Which leads us to where we are today. Bell, what is your plan, what will do you, to restore this trust and make things right? What will you do not just for Lisa but for us all?’

Wendy’s Canada was the first business to step forward with direct support for LaFlamme, changing the iconic red logo to gray and called the journalist a ‘star’

Dove Canada also launched a campaign called Aging is Beautiful after LaFlamme announced her departure from CTV. The company wrote: ‘We should all be able to do it [age] on our own terms and without any consequences’

Canadian UN Representative Bob Rae jokingly wrote on Twitter: ‘No wonder I was never asked to audition at CTV’ and posted a picture of him with his white hair

“Bell, what is your plan?…What will you do not just for Lisa but for us all.” I joined many others in signing this open letter in @globeandmail to Bell Canada about @BellMediaPR‘s “business decision” to fire Lisa LaFlamme in prime of her career. Have a read & RT if you support. pic.twitter.com/RlrW0JoBAr

A retired Lieutenant-General and former Canadian Senator Roméo Dallaire also wrote a statement on Twitter, writing: ‘When women who have risen to position of authority are abused in such a manner, young people – both women and men – learn the same misogynist lessons I was raised on three generations ago.

‘If we as a society care at all about respect, fairness, and equality, we cannot stand by silent and watch as double standards are exercised by male-dominated institutions that support ego-driven old boys’ club thinking.

‘This is the stuff of the past. We must break this cycle. We should have broken it a hell of a long time ago.

‘The abrupt and callous dismissal of respected anchor Lisa LaFlamme after 35 years will have significant fallout. And not only for CTV and Bell.’

Bob Rae, a Canadian representative for the UN, jokingly Twitter: ‘No wonder I was never asked to audition for CTV,’ with a pic of his white hair.

Others pointed out that Peter Mansbridge and Lloyd Robertson, both male anchors with gray hair, still have jobs.

Another pointed out that Bell Media treated one of its highest staff members badly and said: ‘Just imagine how they treat the folks at the bottom.’

Bell Media has faced prior criticism for allegedly having a toxic workplace, including allegations of sexual harassment, bullying, and inappropriate behavior.

Bibic also addressed this in his statement, saying the media company has ‘begun an independent review’ and will be interviewing all newsroom employees during the process.

Share. Facebook Twitter Pinterest LinkedIn Tumblr Email
Previous ArticleUkraine claims early success in counteroffensive as Zelensky vows to ‘chase’ Russians to the border
Next Article “Our laws forbid the use of religion to campaign” – Deji Adeyanju says as he calls on INEC to disqualify candidates visiting churches and mosques