Buffalo hit by THUNDERSNOW blizzard, as locals share clips of snow and lightning 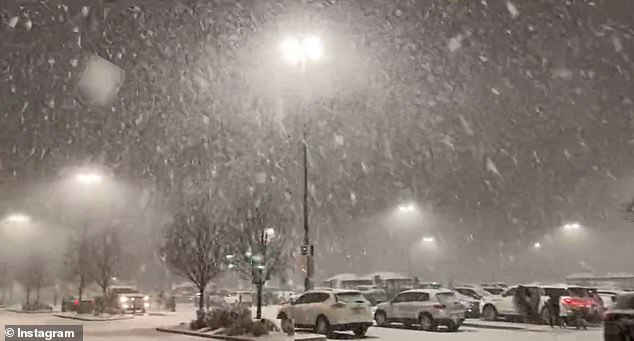 By Alex Oliveira For Dailymail.Com

Buffalo was walloped by a huge snowstorm Thursday night, which brought with it a bizarre phenomenon known as ‘thundersnow.’

Videos from the blizzard showed heaps of snow falling down from the sky as lightening illuminated the clouds and sent thunder clapping across the polar landscape.

The unusual phenomenon is unique to early season lake-effect snowstorms, according to meteorologists, and the conditions in Buffalo are ripe for a night of thunder, lightening, and gobs of snow.

The storm is expected to bury Buffalo and western New York throughout the weekend, with as much as six feet of snow predicted to fall by Sunday.

Governor Kathy Hochul declared a state of emergency in preparation for the storm, which she characterized as ‘life-threatening,’ on Wednesday.

A reporter for Spectrum News1, Kevin Hayes, posted a video from a last-minute trip to a Wegmans supermarket in Hamburg, New York

As the snow started falling Thursday evening, residents in upstate New York began posting videos online of lightening flashing across the sky and thunder booming through the night.

‘THUNDERSNOW!!!!!!’ declared one in a video which showed a snow-covered neighborhood decked out in Christmas decor as thunder sounded.

A reporter for Spectrum News1, Kevin Hayes, posted a video from a last-minute trip to a Wegmans supermarket in Hamburg, New York.

The video captured a flash of lightening as snow poured down across the supermarket’s parking lot, with a roll of thunder close on its heels.

Snowfall in Buffalo as of Thursday afternoon, well before the brunt of the blizzard arrived

Thundersnow storms is similar to typical summer thunderstorms, but bring with them snow instead of rain.

They usually occur during lake effect storms in the early winter season when warmer air coming off of the lakes mingles with colder storm clouds, according to The New York Post.

In the Buffalo storm air coming off of Lake Erie – which still hovers around 52 degrees – collided with cold blizzard clouds and created electrical charges which burst into lightening and thunder.

‘When that happens, you get a lot of converging air at the surface and a lot of rising air in very narrow bands that cause very localized amounts of snow to kind of just dump out,’ Geoff Bansen, a meteorologist for Fox News, told The Post.

‘You don’t typically see a lot of light snow with events of this magnitude; most of the snow is moderate to heavy, and it’s just a matter of where those moderate bands set up,’ he said.

‘It could be whiteout conditions at point A, and then you go point B five miles up the road, it could be nothing.’

Governor Kathy Hochul declared a state of emergency in preparation for the storm, which she characterized as ‘life-threatening,’ on Wednesday

‘When it’s coming down at that rate, it is almost impossible to clear the road to make it safe to travel, so you have to let the snow accumulate,’ she said.

About 130 miles of the New York Thruway was closed down as of 4pm today in preparation for the storm.

‘What we’re talking about is a major, major storm. This is considered an extreme event, an extreme weather event. That means it’s dangerous; it also means it’s life-threatening,’ Hochul said while declaring the state of emergency.

The declaration freed up state response and recovery resources, as well as put the National Guard on standby.

The declaration freed up state response and recovery resources, as well as put the National Guard on standby