Aussie driver is ran off the road after not letting another car merge, Dashcam video 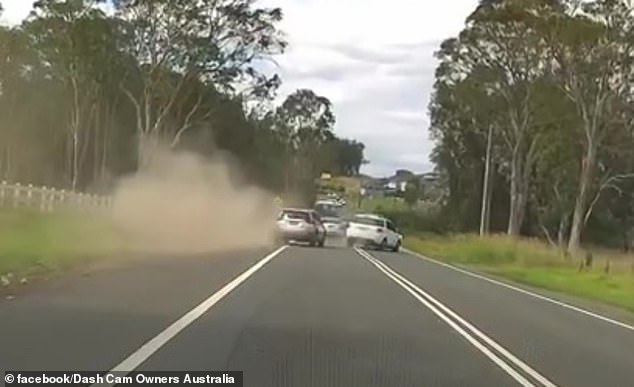 A driver who refused to give way to another car ended up being ran off the street during a dangerous road rage incident.

In Dashcam footage shared online, a silver Toyota RAV4 is seen speeding up while a white Ford Territory tries to merge into its lane on an Australian road on Wednesday afternoon.

Instead of letting the Ford in, the driver of the RAV4 accelerates and swerves onto the wrong side of the road in order to overtake the incoming vehicle.

In Dashcam footage shared online, a silver Toyota RAV4 is seen speeding up while a white Ford Territory tries to merge into its lane on an Australian road on Wednesday afternoon

The RAV4’s erratic driving pushes the Ford Territory back into the shoulder lane and nearly off the road altogether.

As the Ford struggles to gain control, it is seen turning in front of the RAV4 into the lane of oncoming traffic, causing the Toyota to run off the road into a patch of dirt.

The driver of the Toyota then flings his car door open and storms up to the other motorist who is seen trying to reverse back into the correct lane.

Viewers online were left shocked by the incident, with the majority blasting the RAV4 driver for being so aggressive and refusing to let the other car merge.

‘The ford Territory should be allowed in front as it is in front. The RAV4 did not allow the Ford to go in front which is totally unkind,’ one person said.

The RAV4 driver is seen angrily confronting the other motorist, despite many accusing him of being in the wrong

‘It’s called common courtesy to let them in. But it seems everyone’s impatient these days and wants to be one car ahead,’ said another.

‘That Rav4 driver was in the wrong from the start and has a lot of road rage,’ one wrote.

‘The mentality of the Rav driver is remarkable, should be a 10 year driving ban. Clearly has no concept of road rules or any type of courtesy,’ another comment read.

Others pointed out that both drivers should have taken steps to avoid a collision and ‘should brush up on their road rules’.

Share. Facebook Twitter Pinterest LinkedIn Tumblr Email
Previous ArticleWhy an Arab nation has opted to teach the Holocaust in its schools
Next Article “I turned down a lot of opportunities to sleep with rich, married men last year” – Mandy Kiss expresses regret (video)