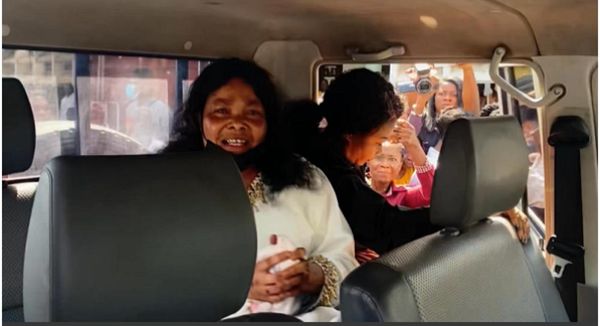 
The embattled self-styled evangelist, Patricia Asieduaa Oduro, aka Nana Agradaa, has found herself in additional trouble as she was re-arrested by the police and dragged before another Circuit Court.

She was re-arrested last Thursday just moments after she had successfully executed the separate GH¢50,000 and GH¢100,000 bail bonds granted her by two different courts where is standing trial for charges of defrauding by false pretences and charlatanic advertisement.

She pleaded not guilty to the charges which are very similar to those in the other two prosecutions, and her lawyer prayed the court to grant her bail pending the trial.

The court, presided over by Her Honour Mrs. Kizita Quashie, granted Agradaa a bail of GH¢50,000 with three sureties, one of whom must be a public servant earning not less than GH¢3,000 a month.

The court said none of the sureties must be an employee of any of the state security agencies. The prosecution was ordered to file its disclosures before January 11, 2023.

The facts presented by DSP Sylvester Asare, indicated that Agradaa on October 5, 2022, advertised on Today TV and other social media platforms that she is capable of doubling money.

He said investigations established that the accused through the said charlatanic adverts on her Today TV and on social media, “invited members of the public including complainants to attend all-night service at her church – Heaven Way Champion International Ministry at Weija on October 7, 2022, to have their monies doubled. Complainants and other members of the public came from far and near to attend the said all night service.”

DSP Asare stated that Agradaa during the all-night service requested her team to turn off all cameras in the church hall, and subsequently demanded and received huge sums of monies from some members of the public who attended the said all-night service, including the complainants in the matter, but failed to double it for them.