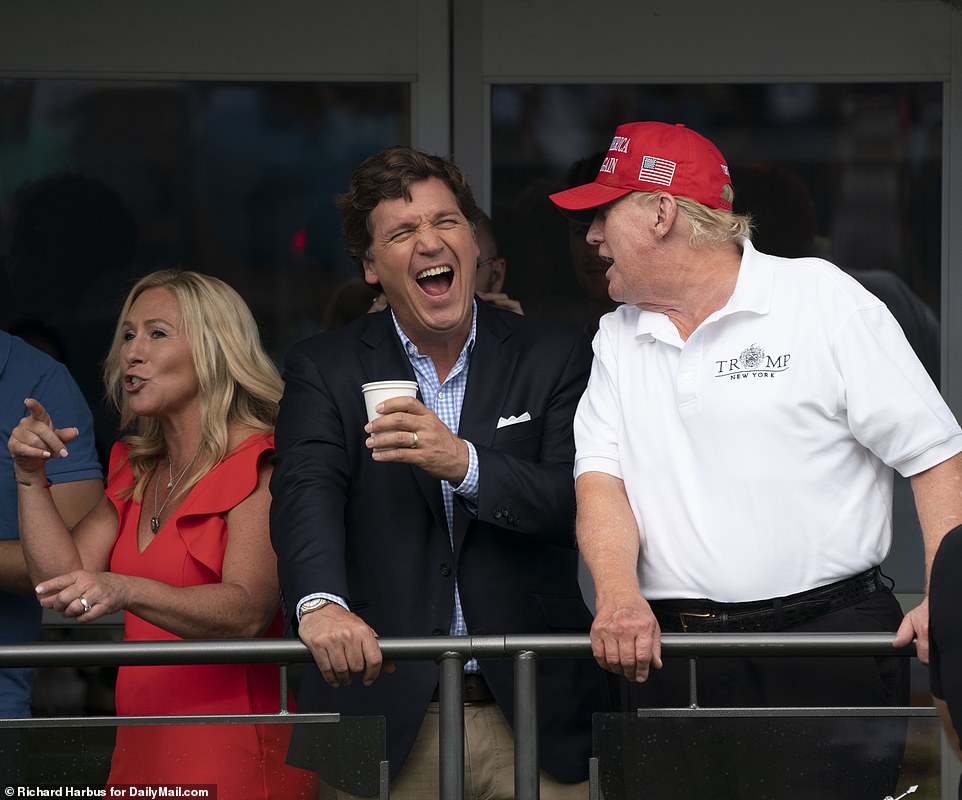 
Presidential hopefuls Donald Trump and Tucker Carlson were seen acting chummy at the former head of state’s Saudi-backed golf tour over the weekend – just two weeks after the influential Fox star shot down rumors of a prospective run in 2024.

The exchange transpired Sunday, on the third day of the Saudi-backed tournament, and saw Carlson, 53, burst out in laughter, after the ex president leaned in to offer the remark.

Both have been tabbed as potential candidates for the GOP in the upcoming election – aspirations that as of now only Trump, 76, has embraced.

However, recent public appearances from Carlson have seemed to suggest a run from the talking head is not out of the realm of possibility – despite the star himself asserting earlier this month that he had no desire to be president.

The exchange transpired Sunday, on the third day of the Saudi-backed tournament, which he agreed to host at Trump National Golf Club Bedminster for an undisclosed sum. Trump is currently leading the pack out of GOP candidates for the upcoming presidency

‘I have zero ambition, not just politically, but in life,’ Carlson assured onlookers on July 15, in an interview with former New York Times media columnist Ben Smith.

‘My ambition is to write my script by 8 pm,’ the longtime host of Carlson Tonight went on to add, asserting that he was happy in his day job and that a foray into the world of politics – similar to Trump’s several years ago – was not in the cards.

‘I don’t want power, I’ve never wanted power,’ Carlson told Smith, adding, ‘I’m annoyed by things, I want them to change – but I’ve never been motivated by a desire to control people.’

When further questioned by the journalist on the chances of a run in 2024 following swirling rumors online, Carlson laughed off the inquiry, flat-out declaring to Smith that he was ‘not running’ and that he was a ‘talk show host.’

He would then add a characteristic anecdote illustrating the drawback of following fellow media personality Trump – who is currently under investigation for his role in the January 6 attacks – to the Oval Office.

‘What a blessing it is to say what you really think,’ said Carlson, who began hosting the eponymous program Only women can get pregnant – I dare you to say that.’

The question came on the heels of persisting rumors that the Fox News fixture would ditch his lucrative TV career for a foray into politics – a hypothesis that was further enflamed by a recent public appearance by Carlson on July 15 in Iowa.

The appearance saw Carlson speak to a crowd of 1,800 Christian conservatives in the capital city of Des Moines for the Family Leadership Summit – and suggest he would seek the White House, despite the hopes of several conservatives unhappy with other prospective candidates, such as Trump and Texas Senator Ted Cruz.

The appearance, however, did see the talking head tell the conservative Christian audience to avoid other potentially harmful candidates when settling on a GOP nominee in 2024.

‘You need to be really wary of candidates who care what The New York Times thinks,’ he told the crowd, while being greeted with uproarious applause.

He used former South Carolina Governor and UN Ambassador Nikki Haley as an example, whom he accused of pandering to the left following the police murder of George Floyd in 2020.

‘Of course, what happened next was personal and painful for everyone,’ Carlson said in response. ‘Our cities burned down. A lot of people died.’

He went on: ‘And I thought, why should what happened between a cop and George Floyd outside a convenience store in Minneapolis be personal and painful to anybody else? What are you even talking about?

‘You’re trying to please the people whose opinions you actually care about at The New York Times.’

The appearance – which also saw Carlson ridicule concern over climate change and supporters of transgender people – served as particularly prominent however, due to its being in Iowa – which every four years is the first state to have a say in picking the Republican presidential nominee.

Further fanning the flames surrounding Carlson’s rumored run, the meeting was held at the same forum where Carlson’s pal Trump spoke seven years ago before the mogul completed his eventual transition from a business personality to the head of the US executive branch – an appearance that saw the Apprentice host tell onlookers that fellow candidate John McCain was ‘not a war hero’ due to his being captured while fighting in Vietnam.

The Fox host, meanwhile, has long been floated as a potential contender for the upcoming presidency, should Donald Trump decide against a third run. The ex president remains at the top of polling as of Sunday, ahead of other conservatives like Ron DeSantis of Florida and Ted Cruz of Texas. Trump is the only one of the four to officially air his presidential aspirations.

The ex-president Sunday was spotted signing autographs for fans and chatting with golfers at his Bedminster, New Jersey club, joined by Carlson, Georgia Rep. Greene, 48, and 44-year-old son Don Jr. at the event, which has been panned by detractors over it being funded by the Saudi royal family, and supposed downplaying of links between the Saudis and 9/11.

The ex-president, however, agreed to host the tournament, at Trump National Golf Club Bedminster, for an undisclosed sum.

He was seen scarfing down grub in the VIP area with Carlson and others, as the high-powered group watched the competition from a VIP area at the New Jersey venue.

Earlier on Sunday he took to his social media app Truth Social to troll President Joe Biden for his COVID-19 re-diagnosis.

The president tested positive on Saturday after testing negative four days in a row, though he’s no longer showing symptoms after being infected earlier this month. His doctor explained that it was a rare but not unheard-of symptom of the treatment Paxlovid.

But Trump suggested that Biden had ‘dementia’ rather than the coronavirus and used it to once again push one of his election fraud conspiracy theories about 2020 voter counts in battleground states like Wisconsin.

‘Joe Biden’s second bout of Covid, sometimes referred to as the China Virus, was sadly misdiagnosed by his doctors. He instead has Dementia, but is happily recovering well,’ Trump wrote on Truth Social.

‘Joe is thinking of moving, part time, to one of those beautiful Wisconsin Nursing Homes, where almost 100% of the residents miraculously, and for the first time in history, had the strength and energy to vote – even if those votes were cast illegally.’

He was seen interacting with fans on Sunday, many of whom came equipped with pro-Trump gear

He tossed hats into the crowd and signed autographs, as seen by pictures snapped by DailyMail.com

People brought banners that said ‘Trump 2024’ and were enthusiastic engaging with the former president, who tossed his signature red caps up into the stands.

On Saturday Trump was joined at the event by firebrand Rep. Marjorie Taylor Greene (R-Ga.).

Trump, 76,  kept on par with his white monogrammed shirt and black slacks has he hit the golf course again for the third day of the LIV tournament.

The former president was joined by the famous and outspoken Republicans, including Greene, 48, Caitlyn Jenner, 72, and his son Eric Trump and his family.

Jenner is competing in the tournament with British golfer Paul Casey, who reportedly said ‘she has a pretty good swing.’

Greene wore a blue and black striped sleeveless dress and huge sunglasses as she was pictured standing next to a disheveled Trump. The pair were seen having quite the conversation, as they laughed and pointed to each other as photographers snapped their photos.

Donald Trump was joined by Rep. Marjorie Taylor Greene at the LIV golf tournament at his at Bedminster on Saturday

Joined by his family, the pair seems to enjoy the day’s events and had an energetic conversation

Trump’s son kept a casual figure in a dark green polo monogrammed with the course’s name and a black Trump hat.

His wife, Lara, meanwhile proved she’s quite the fashionista as she wore a white and yellow summer dress with a boy in the middle and sparkly blue shoes with stars on them.

The tournament, which bears the slogan ‘Golf but louder,’ has divided the world of sport.

Some athletes refuse to take part in protest against Saudi Arabia’s track record of human rights abuses, and the event has been eviscerated by the families of 9/11 victims, in light of a recently declassified government report which suggests there were links between the terrorists involved in the attack and the Saudi Arabian government.

Many of those families gathered at the local library near Trump’s club in order to protest since the tournament has started; they couldn’t get near the actual event, which was swarming with Secret Service.

More families of 9/11 victims made their voices heard.

‘We’re standing here, in the backyard of where 750 people were turned to dust,’ one speaker said. ‘We cannot believe we have to be here 21 years later, speaking out against a government that’s trying to sports-wash or whitewash their atrocities.’

The protesters in Bedminster wore red caps that read: 9/11 Justice. Trump, and many fans here, sported red, too, except theirs read: Make America Great Again. Many more wore TRUMP hats.

Earlier this weekend, Trump defended hosting the series, telling reporters at the course: ‘I’ve known these people for a long time in Saudi Arabia and they have been friends of mine.

‘The PGA was not loved by a lot of the players, for a long time. Now they have an alternative and nobody ever would have known it was going to be a gold rush, like this.’

Trump’s son, Eric, also seemed to enjoy Greene’s company as their pair chatted at the event

As for 9/11, he said: ‘Nobody’s gotten to the bottom of 9/11, unfortunately. And they should have. As to the maniacs that did that horrible thing to our city, to our country, to the world, so nobody’s really been there.’

Later, as he headed off the first tee, Trump even hinted that he would run for the White House once more.

‘You’re going to be so happy. We’ll let you know pretty soon,’ he said. ‘They just did a story on me, beautiful,’ he said. ‘The first one in five years. Front page, tell them I appreciate it.’