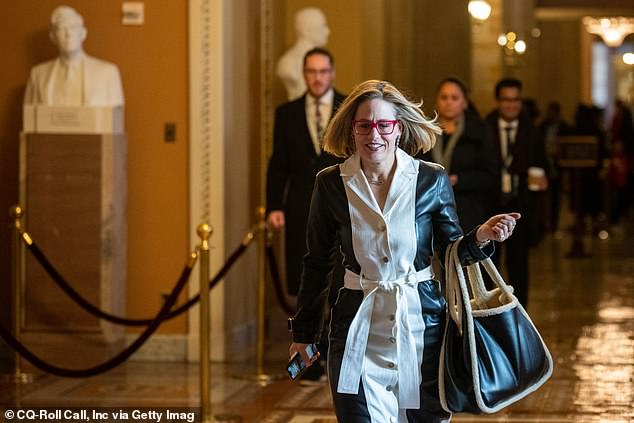 
Republicans now want Senator Kyrsten Sinema to caucus with them in the upper chamber after she left the Democratic Party last month to become an independent.

Senator John Thune, the Republican Whip and one of Sinema’s closest allies in Congress, is urging the Arizona lawmaker to caucus with the GOP rather than Democrats in the closely split 51-49 Senate.

It comes as members of Sinema’s old party won’t say whether or not they would support a reelection run from the independent or if they will back Democratic Representative Ruben Gallego, who announced his bid for the Senate seat on Monday.

Sinema has not yet announced whether she will run for reelection in the 2024 race.

Senator John Thune is urging Sinema to caucus with the GOP, saying it would make it a lot clearer on who Republicans should back in a 2024 Arizona Senate race

Democrats insist it’s too early to say what candidates they would endorse in Arizona’s Senate race – even though the entire political world is already analyzing how the party’s campaign landscape is looking for the next election cycle.

‘Senator Sinema is a friend of mine, and I don’t know if she’s planning on running or what her intentions are, and I don’t want to get out in front of what she wants to do,’ the Michigan Democratic senator added.

Meanwhile, Thune is urging Sinema to wander even further from the Democratic Party by caucusing with Republicans under her new independent party affiliation.

‘Obviously we’d love to have her become a Republican or at least caucus [with] Republicans. That would make things a little more clear,’ the South Dakota senator welcomed.

He told reporters when asked Monday if he would support a Republican candidate over Sinema: ‘We’ll see. We’ll cross that bridge when we come to it.’

‘A lot of Republicans [are] talking about’ running in Arizona’s Senate race, Thune noted.

Rank-and-file Democrats along with those in leadership say it’s too early to say who they will support in the 2024 Arizona Senate race. Senators Peters and Durbin are among those who won’t say if they will support Sinema over Democratic Rep. Ruben Gallego

Sinema, who was considered one of the most moderate Democrats over the last several years, has worked closely with GOP colleagues on a flurry of issues like infrastructure, taxes and gun violence.

The Arizona senator made it abundantly clear when announcing her party affiliation switch last month that she was an independent, and would not caucus with Republicans.

In November 2021 – just over a year before her announcement – Sinema said she was not switching parties any time soon, which proved to be untrue just 13 months later.

‘No. Why would I do that?’ Sinema questioned during a rare sit-down interview with Politico when asked if she would consider defecting to the GOP.

Democratic Representative Ruben Gallego for the 3rd district of Arizona released on Twitter Monday a video announcing his run for the U.S. Senate in Arizona. Sinema has not yet said whether she will run for reelection in 2024

Democratic Senators who spoke with Punchbowl said that they haven’t thought about whether they would support Sinema in a reelection bid – especially now that Gallego is in the running.

‘It’s way too soon to get into that,’ the Senate’s No. 2 Democrat Dick Durbin of Illinois said. ‘We don’t even know who’s going to file for any office in any state at this point.’

Sinema’s Arizona colleague Senator Mark Kelly said: ‘I’ve worked very closely with Sen. Sinema for a long period of time. She’s a very effective member. But I’m not going to get ahead of her on 2024, or anybody else.’

The Democrat added that he wants to ‘put politics aside’ and won’t ‘get ahead of anybody.’

Sinema’s situation has launched Democrats into a precarious dynamic and has opened the door to a three-way general election race.

DSCC vice chair Senator Tin Smith laughed when asked if she would support Sinema, repeating the dodge that it’s too early to weigh-in.

‘We don’t even know what Sen. Sinema’s plans are. She’s my colleague,’ Smith noted.

It’s far from early to start thinking about 2024 – Donald Trump has already announced he is running for president.

Donors, activists, lawmakers, lobbyists and everyone else in politics is looking at who to give money in the next election cycle, which is undeniably underway.

Sinema, before her party switch, was considered one of the most moderate Democrats along with West Virginia Senator Joe Manchin (left). The two have faced a lot of criticism within the party for their opposition to much of President Joe Biden’s agenda

More ‘moderate’ Democrats, however, have already said they would likely support Sinema if she does decide to mount a reelection bid.

He also claimed Democratic Party’s leaders ‘should support someone who brings basically some peace, if you will, or some rational thinking on some of this stuff without being pushed far left and far right.’

‘I don’t always agree with her, but I think having a voice like that — she says what she thinks,’ the failed 2020 presidential candidate said. ‘And I think she adds value to the caucus.’

‘She’s caucusing with Democrats,’ the Colorado senator added. ‘The problem is she’s too moderate as a Democrat — well, that’s half the time what they say about me!’

‘I can’t imagine not supporting her,’ Hickenlooper said.

Senators Angus King and Bernie Sanders are also two independent lawmakers who caucus with Democrats and have earned the backing of the party in their races despite not having the official party affiliation.

Gallego’s entrance into the 2024 Senate race has complicated things for Democrats, especially those who have not been as vocal in their criticism of Sinema for blocking much of President Joe Biden’s agenda.

The Arizona representative released a three-and-a-half-minute announcement video on Monday entering the race.

He only once specifically called out Sinema’s name, saying he needs help from supporters to take her seat in the Senate – but took several other veiled swipes at the sitting senator.