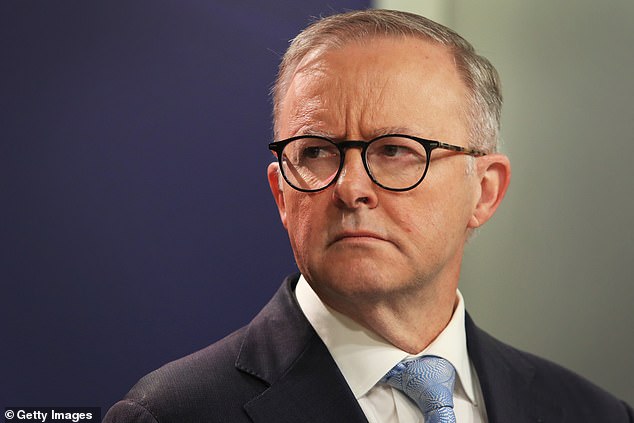 
Hundreds of Sri Lankans facing an economic crisis have tried to make it by boat to Australia in the past month, with people smugglers telling those on board they could be let in under the new Labor government.

‘We believe the smugglers have engaged in these activities… to convince poor people that this change of government may be in favour of their side,’ Sri Lankan navy captain Indika De Silva told the ABC.

‘Smugglers find this difficult situation in the country as a benefit for them, they’re trying to exploit the situation and people are fooled and misled by these smugglers.’

It comes as a boat carrying 42 asylum seekers was set ablaze by border force agents in territorial waters off Australia on Friday near the Cocos (Keeling) Islands, off Western Australia.

It was the third vessel intercepted by the Royal Australian Navy since election day on May 21 – despite prime minster Anthony Albanese vowing during the election campaign to ‘turn back boats’.

What is Operation Sovereign Borders?

Operation Sovereign Borders is a military-led border security operation that was established in 2013 to deter illegal arrivals to Australian shores.

Boats will either be turned back, set ablaze or seized with those onboard sent home or processed in offshore detention facilities.

The current Commander of Operation Sovereign Borders is Rear Admiral Justin Jones, who was appointed in February 2022.

Australia’s strict policy has received criticism from human rights groups with some opponents calling it illegal.

The nationality of those onboard remains a mystery but the previous vessels which were captured originated from Sri Lanka.

The country is currently in the grips of an economic crisis which has led to critical shortages of food, medicine and fuel sparking violent nationwide protests.

‘What we’ve found is that some people have paid thousands of dollars for these journeys, so they had some kind of economic background,’ captain Indika De Silva said.

‘Earlier it used to be the poor people.’

Most of the fishing trawlers used to take the dangerous 8700km journey don’t have a toilet or access to fresh water.

‘The journey is very difficult, but I had to manage any way I can, I have to leave the country,’ a Sri Lankan named Poopalapillai who was picked up by his country’s Navy two days before the Australian election revealed.

The boat had started to sink with 40 people onboard after the crew tried to outrun the approaching naval ship.

‘The people smuggling agent said, “The Australian government will change, the future government is a good government, and they will let you inside the country”,’ Poopalapillai said.

One man recently deported after being intercepted on a Sri Lankan fishing boat at Christmas Island on June 9, Sadish Kumar, 20, admitted heading to Australia to find work.

His father, Ramalingam Kumar, explained the intolerable situation his son and so many young Sri Lankans find themselves in.

‘There is no food he likes to eat, no fuel for his bike and no work to earn. Who would live in this country?’ he told The Australian.

Another of the young men on board, Eranga Madhushan, also 20, explained he expected to be sent to a ‘refugee camp’.

Protests have rocked Sri Lanka for two months, calling for the resignation of the president over his failure to address the economic crisis

Others said they believed the Australian government would accept them because the Sri Lankan government could not find them jobs or ‘a plan for our future’.

The man who sold the intercepted trawler to people smugglers admitted selling it because he couldn’t escape his debts.

Emmanuel ­Stephen admitted he was ‘a fool’ for letting his son Emmanuel Mahesh and other men, aged between 20 and 30 – who were all deported – buy his boat.

Mahesh, 30, who is a young married father, appeared in court on Colombo and was remanded to face serious criminal charges again next week as the boat’s alleged owner.

His father refused previous offers from people smugglers to buy his trawler, hoping to fish his way out of financial trouble, but high fuel prices and crew shortages meant his debt problems overwhelmed him.

He accepted the bid to sell his boat and denied it had anything to do with the change of Australian government.

Australia since 2013 has held a strict policy of turning back boats carrying asylum seekers. Pictured: Asylum seekers on route to Australia rescued off Indonesia in 2013

Owning money to ‘several banks’ and with his home and boat mortgaged he needed the money.

People smugglers promised they’d pay $19,700 for it but could only come up with $13,800, promising to pay the rest when they arrived.

But they were intercepted at Christmas Island and deported.

‘I almost got a heart attack when I heard Australian border control had arrested the boat with my son. I was a fool to give my boat to these people,’ Emmanuel Stephen said.

He claimed to have tried to send his son to Australia legally but failed.

It comes as locals in the Cocos Islands noticed a ball of smoke on the horizon at about 9am on Friday, prompting grandee John Clunies-Ross to alert the Australian Border Force.

He was quickly informed the agency was already aware of the vessel.

HMAS Melville is understood to have made the initial approach after tracking the boat across the Indian Ocean.

Once a vessel carrying asylum seekers is intercepted and all onboard are safely transferred to a government ship, it is standard practice to set the boat on fire, rather than tow it back to shore.

The Australian Border Force however has not commented on the incident, as the clandestine agency ‘does not discuss operational matters’.

Asylum seekers coming to Australia have been a highly politicised matter in recent years. Pictured: An Asylum seeker boat in 2013 off Christmas Island

However in a statement to The Australian on Monday it said: ‘Australian government policy is steadfast: people who travel illegally to Australia by boat will not settle permanently here.’

‘Operation Sovereign Borders is about defeating people-smugglers who manipulate vulnerable men, women and children to risk their lives at sea.’

On the morning of the Australian Federal election the Liberal party advised voters that an ‘illegal’ boat that was intercepted by Border Force officials allegedly trying to enter Australia.

The 12 people on board, all Sri Lankans from Negombo, were apprehended near Christmas Island and deported.

Since then another Sri Lankan fishing boat with 15 aboard was picked up by the Australian Border Force, while three larger boats were caught by the country’s navy.