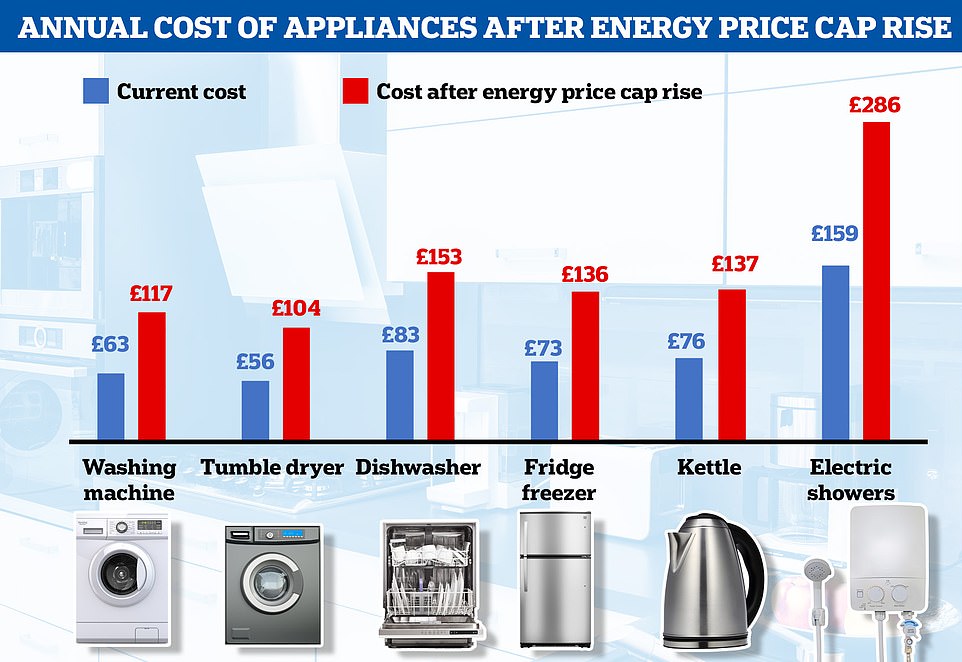 Boiling a kettle for a cup of tea will set you back an extra £60 over a year under the the new price cap.

While charging phones and laptops will only increase by 20p and £5.85 a year respectively.

Energy regulator Ofgem estimates the new unit rates for electricity will be around 52p per kWh, up from 28p at present.

There have also been widespread calls for new support packages to help households cope with the rising costs facing a desperate struggle this winter.

Data from consumer website Which? and Uswitch shows how much the cost of running electronical appliances is set to increase by based on the new energy price cap.

The price cap on energy bills will go up by 80 per cent on October 1, meaning the average household’s yearly energy bill will go from £1,971 to £3,549

The price cap is predicted to rise even higher, meaning the appliances will end up using even more energy

Electric showers are the most power hungry device, based on average use they will cost £286.97 a year according to Uswitch

The washing machine is one of the most frequently used appliance and one that can be hard to lower usage of.

The average annual washing machine running costs will increase from just over to £63 to more than £117.

The total figure may vary depending on how frequently you use the machine and its size.

To save as much money as possible, Which? recommends avoiding small loads and only putting one on if the machine is about 80 per cent full.

Lower temperature washes, 30°C, can cut energy use by 38 per cent on average compared to a 40°C wash.

The average cost of running a tumble dryer throughout the year will nearly double from £56 to £104 – with some expensive models predicted to run up a bill of £359.

The bill is calculated on using the machine on a standard program three times every week.

Bills can be reduced by not using the machine and instead hanging them outdoors or inside but with the windows open to avoid damp.

Watching TV will be subject to relatively marginal increases: £8.50.

Watching TV will almost be the same price, with just a slight rise of £8.50 expected over a year

Electric showers are on average the most expensive commonly used appliance, normally racking up an annual bill of £159.43 but after October 1 they will cost £286.97 according to Uswitch.

Fewer showers or colder showers are the best ways to save money.

The cost of an average dishwasher will rise from £83 to £153, assuming it is used five times a week.

Even smaller and cheaper to run models will see nearly £40 increases.

Like the tumble dryer, money can be saved by imply not using the dishwasher and instead washing things by hand – although this does use more water.

The fridge freezer is commonplace in every kitchen, and is almost always turned on for the entire year.

Newer models are very energy efficient, but will still go from costing £73 to £136.

There are few actions that can save pennies with fridge freezers, other than making sure the door is closed, the door seals aren’t damaged and letting leftovers cool down before refrigerating.

Keeping the fridge freezer door closed is one way to save money, as using the machine year round is predicted to cost £136

Your energy bill will vary depending on if you have a gas or electric bill. Microwaves are the cheapest option to heat food over a year

Ovens use less electricity than other household appliances, a single gas oven costs just £20 a year while a single electric oven costs £66.

Microwaves, air fryers or slow cookers are alternative that can save money, alternatively bulk cooking can reduce energy usage.

Slow cookers cost 16p a day to run, while air fryers typically add 14p a day to energy bills, a microwave costs only 8p a day to use.

Using more efficient appliances could typically save households £287 a year, according to the research, which was published as part of a new campaign with the budget supermarket Iceland.