Tema-Mpakadan railway line to be completed by end of 2022 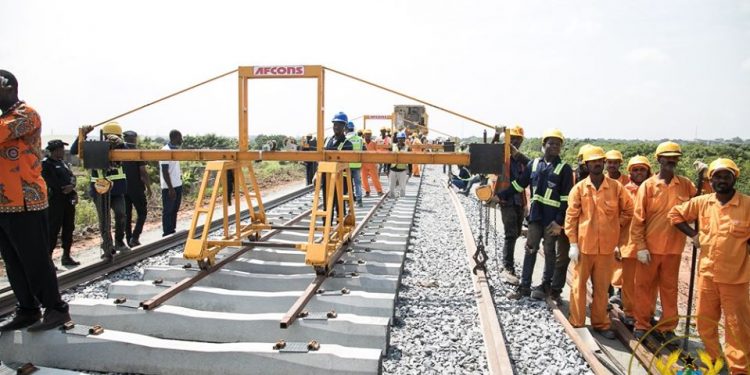 
The Ministry for Railway Development says it is confident that the Tema-Mpakadan railway line will be completed by the end of 2022.

The construction of the 97.6-kilometre rail line has, since construction began witnessed several setbacks including the emergence of COVID-19 in 2020.

The project begins from Tema in the Greater Accra Region, through Afienya, North Tongu District in the Volta Region and ends at Mpakadan, a few kilometres from Akosombo.

Addressing the media after inspecting the Volta Rail Bridge, Sector Minister, John-Peter Amewu said despite the delay in its completion, work on the project is ongoing in earnest.

“We’re hoping that by the end of the year, we should be seeing a practical completion. What we intend to do is to procure two fairly used [trains] to ply between Tema and Mpakadan for passengers.”

“We are aware of the heavy traffic between Afienya and Tema and so if we are able to put those vehicles on the track, it is going to take that pressure off the road and make commuters comfortable. We are working towards that, and it will be done shortly”, the Minister assured.

The Tema-Mpakadan rail line is part of the 1,000km Ghana-Burkina Faso Railway Interconnectivity Project which will link Ghana from Tema to Burkina Faso’s capital, Ouagadougou.

The two countries signed a Memorandum of Understanding (MoU) in January 2017 in Ouagadougou to kick-start the project.

According to the plan, some 800km of the railway line will be in Ghana’s territory, while the remaining 200km will be on Burkinabe soil.

In December 2019, the then Railways Minister, Joe Ghartey disclosed that 28 kilometres of track had been laid, with the contractor assuring that 40 more kilometres of the track would be completed by the end of this year.

The project, when completed, will be a modern, standard gauge rail line.

However, in August 2021, residents of Apegusu and Mpakadan both in the Asuogyaman District of the Eastern Region, called on the government to come to their aid over what they considered as a blatant disregard of their needs by contractors undertaking the Tema – Mpakadan Railway Project.

Residents of the two communities claimed their buildings, and sources of drinking water among others have been adversely affected following the constant blasting of rocks there, yet the contractors have failed to address almost all their concerns including payment of compensation.