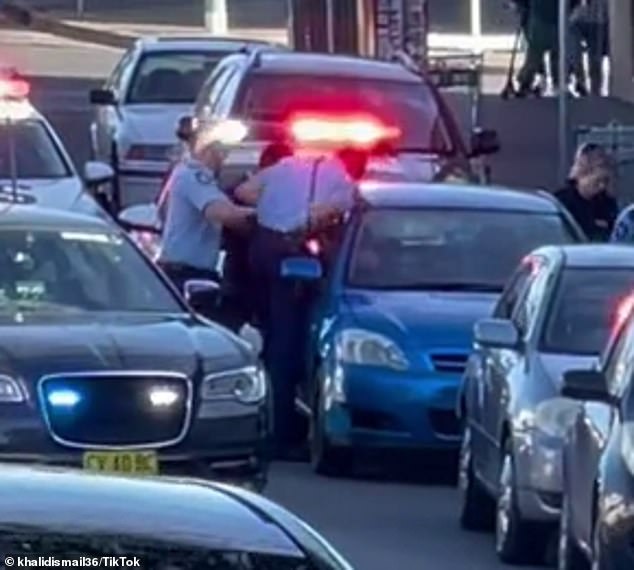 
Watch the shocking moment a man, 35, is dragged through his car window after he was stopped for a breath test and police told him they were going to search his vehicle

Shocking footage shows the moment a man was dragged out of his car by police after refusing to let cops search the vehicle.

Officers stopped the man, who was driving a blue Toyota Corolla, at Riverwood in Sydney on Monday for a random breath test.

The 35-year-old’s test was negative but police said he became aggressive after they said they’d be searching the car.

A video of the incident shows several officers dragging the man out of the window before wrestling him to the ground.

They can be seen seemingly struggling with the man before he is finally brought under control.

He is alleged to have assaulted a Senior Constable before the officers dragged him from the car.

Police say he then assaulted two more police officers before they were able to subdue him and he was arrested.

The unnamed man has now been charged with three counts of assaulting a police officer.

He was refused bail to appear at Sutherland Local Court the following day.

There, he was refused bail again and will now reappear at the same court on Tuesday October 4.

Video of the incident was shared widely on TikTok with users reacting with shock at the scene.