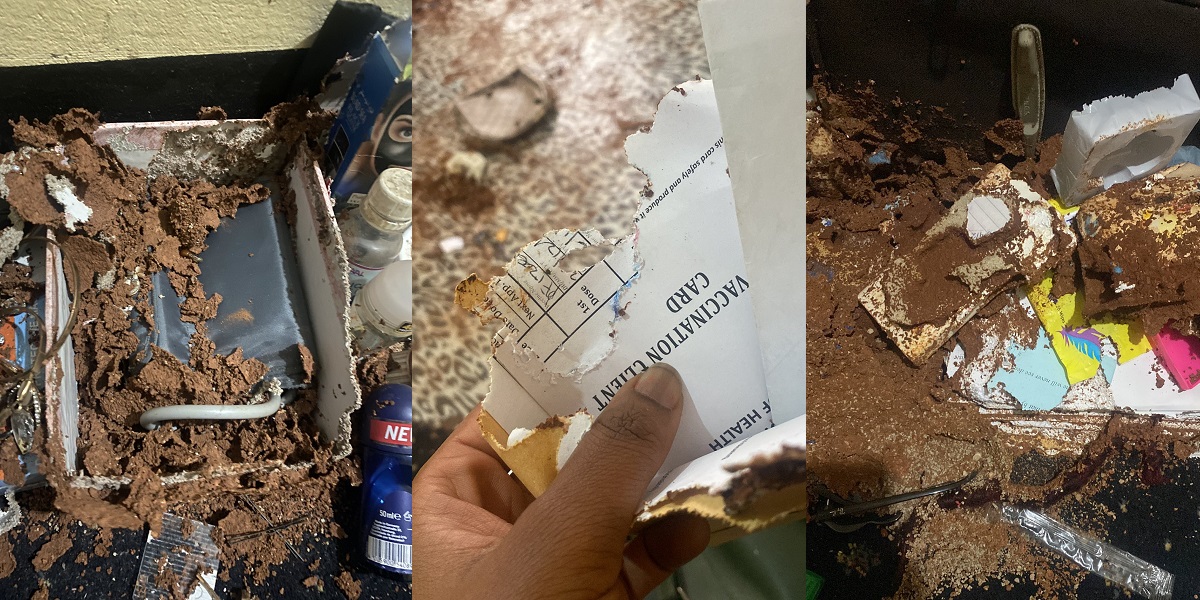 
A Ugandan student, identified as Martha, has complained bitterly after termites destroyed her belongings in her room in school.

Martha, who is broken-hearted by the incident, took to Twitter to share photos of the horror sight she met when she returned to school after a three-month break.

According to her, she had been at home for three months because schools were temporarily shut down in Uganda to curb the spread of Ebola.

Unfortunately, termites infested her room and damaged most of her documents and properties, leaving a dirty pile.

Sharing the photos, the lady who disclosed that she recently had an accident, said she is tired of being strong.

“Some situations are so triggering, you start piling up every single thing then cry, cry, cry,” she tweeted.

See the disturbing photos below,

See her tweets and replies below,

In other news, Kenyan Policemen have arrested a Form Four student, Joseph Odhiambo, who faked his own abduction.

The Police commander said the student, who has since returned home, confessed to smearing cow blood on his vest and made a sharp distress scream before running away from his mother’s compound.

The man told police that it was his friend who advised him to do that to get money from his (suspect’s) mother.

“Shortly after wishing his mother good night at 9pm and departing for his house, he made a sharp distress call. When his mother rushed to his house, she only found her son’s blood-soaked vest,” Pombo said.

The following morning, the student’s mother went to the Awendo police post and filed a missing person’s report.

On Sunday, January 8, he slept at his friend’s house before embarking on a return-home journey, when it became clear to him that his mother won’t raise the Sh20,000 he’d demanded as ransom.

The suspect is being held in custody at Awendo Police Station as investigations continues.

Share. Facebook Twitter Pinterest LinkedIn Tumblr Email
Previous ArticleThe most popular used cars in the US by sales AND by state: Pickups dominate the market
Next Article Heartbroken man discovers he is not the biological father of his three children one year after undergoing vasectomy