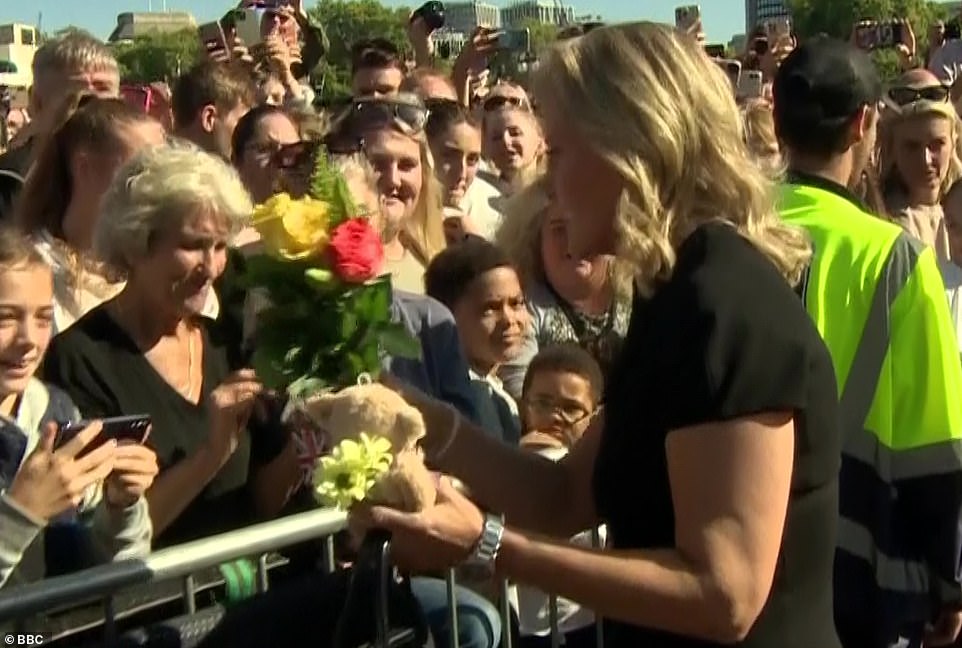 By Jack Wright For Mailonline

The Earl and Countess of Wessex have surprised well-wishers gathered outside the gates of Buckingham Palace this afternoon – after the beloved couple said the Royal Family had been ‘overwhelmed by the tide of emotion’ following the Queen’s death.

Royal fans applauded Sophie and Prince Edward and told them ‘sorry for your loss’ as the couple went on a spontaneous walkabout outside the palace gates this afternoon – shortly after King Charles III and the Prince of Wales met mourners queueing along the banks of the Thames to see the Queen lying-in-state at the Palace of Westminster.

The Queen’s youngest son could be heard asking mourners where they had come from and whether they were making their way to Green Park to lay flowers. He then told them that the Queen would ‘appreciate’ the number of people paying their respects – while his wife was given bouquets and a stuffed toy as she shook hands with those gathered.

In an emotional statement released just hours before he attended a poignant vigil with his siblings the King, the Duke of York and the Princess Royal in Westminster Hall last night, the Earl of Wessex said: ‘As a family, we have grown up learning to share our parents, especially our beloved mama, with the nation, her realms and the Commonwealth.

‘While it has been lovely to have spent time saying our own farewell privately at Balmoral, it is now time to allow others to be able to say their farewell.

‘We have been overwhelmed by the tide of emotion that has engulfed us and the sheer number of people who have gone out of their way to express their own love, admiration and respect to such a very special and unique person who was always there for us.

Sophie, Countess of Wessex meeting royal fans outside the gates of Buckingham Palace

‘And now, we are there for her, united in grief. Thank you for your support, you have no idea how much it means.

‘The Queen’s passing has left an unimaginable void in all our lives. Sophie and I have taken huge pleasure in seeing our James and Louise enjoying the places and activities that their grandparents loved so much.

‘Given that my mama let us spend so much time with her, I think she also rather enjoyed watching those passions blossom. Those times together, those happy memories, have now become massively precious to each and every one of us.

‘May God bless Her Majesty and may her memory be long cherished even as the baton she has carried for these past 70 years now passes to the next generation and to my brother, Charles. Long live the King.’

On Thursday, Prince Edward and Countess Sophie greeted mourners in Manchester as thousands turned out to pay tribute to the Queen. The day before, the couple were part of the procession which brought the Queen’s coffin from Buckingham Palace to Westminster Hall.

In Manchester, Sophie, the Countess of Wessex, met Josh, a young mourner who was waiting to see her with his mother, Sue.

Recounting the moment they met, Sue said: ‘She just said ”nice to meet you, do you want me to take your flowers?” Then Josh said ”can I have a hug?”. They hugged, then he asked for a photo. The bouquet is signed from Josh but it’s got my name on it as well.’

Asked what the moment felt like, Josh – who is non-verbal – replied: ‘Happy.’

Edward and Sophie paid tribute to the Queen at Westminster Hall alongside their children, Lady Louse and Viscount Severn, earlier in the week.

This is a breaking news story. More to follow