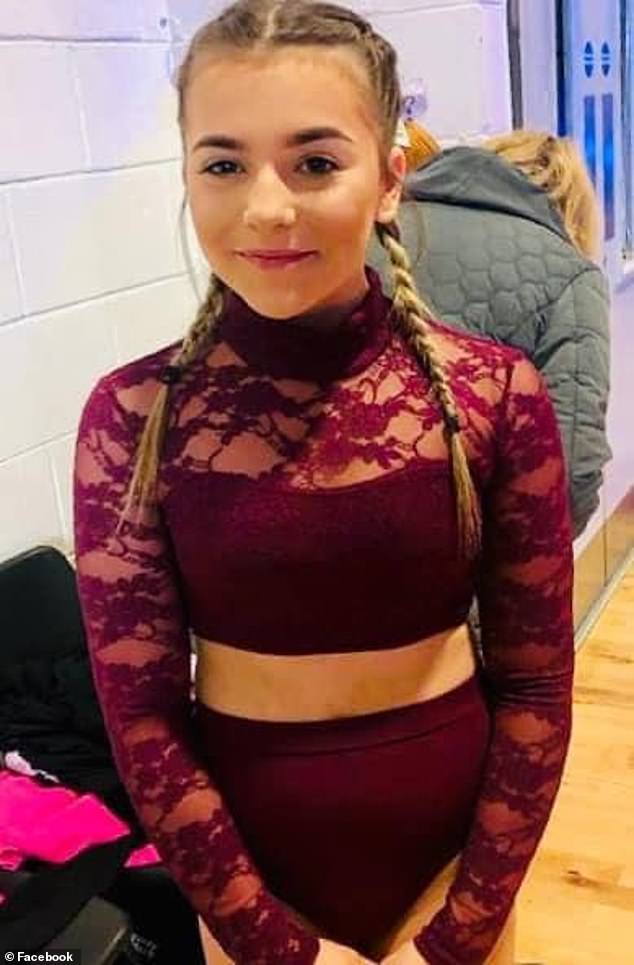 
A Snapchat drug dealer who killed a schoolgirl after he supplied her with crystal MDMA has been jailed for seven years.

James McCairn, 18, sold the drugs to 14-year-old Cerys Reeve after advertising his illegal trade on the instant messaging app.

The youngster, a talented dancer, tragically died after then taking the substance during a sleepover at a friend’s house in Greenock, Inverclyde on July 13, 2020.

The court heard harrowing detail about how Cerys started ‘acting really weird’ after taking the drugs, unable to control her movements, before having a seizure and being rushed to hospital where she was put on a ventilator and later died.

First offender McCairn was found guilty of culpable homicide following a trial at the High Court in Glasgow.

Prosecutors said he had ‘recklessly and unlawfully’ given the deadly class A drug to Cerys at his home in Greenock.

Cerys Reeve (pictured) died after taking crystal MDMA during a sleepover at a friend’s house in Greenock, Inverclyde on July 13, 2020

McCairn was further found guilty of supplying Ecstasy to other young people in the town between November 2019 and July 2020.

Judge John McCormick told the sentencing: ‘The charge is serious in itself as you supplied class A drugs to school age children.

‘The court is determined to do what it can to deter those who are minded to supply drugs to young people.

‘You recklessly supplied drugs to Cerys Reeve and as a consequence of ingesting that she lost her life when she was 14 and you were 16.

‘I can only imagine the anguish felt by her family and no sentence can reflect on the gravity of what happened.

‘Such as the nature of what happened, even members of the jury were reduced to tears when returning their verdict.

‘Taking account of the gravity of the offence and the consequences for Cerys Reeve the appropriate period of detention is seven years.’

The trial heard how McCairn had been advertising pills for sale on the morning of July 13, 2020.

He had put a message at one stage stating: ‘Mandy (slang name for MDMA) for sale. Good prices. Get SnapChattin’.

The schoolgirl had been at a friend’s house before going to McCairn’s to purchase MDMA.

Cerys returned and stated she had paid £10 for the drugs, which she was to pay for later that week.

The teenager went on to mix the powder into a cup of juice before taking it.

Her friend then came back into the room after making a toastie – and described Cerys soon ‘acting really weird’.

Carys Reeve was a talented dancer who died after taking crystal MDMA at a friend’s house in July 2020. A witness told the court the youngster started ‘acting really weird’ after taking the drugs

This initially included her not being able to control her arms and kicking items off a window ledge.

The friend told prosecutor Graeme Jessop: ‘She asked me who I was and where she was.

‘She was talking over herself and having conversations.

‘She kept saying Thursday and saying one of our friend’s names.’

The witness went onto describe Cerys grunting, sweating and falling off the bed, which awoke the girl’s mum.

The 14-year-old schoolgirl (pictured) was rushed to hospital after taking Ecstasy. She was put on a ventilator but later died

Cerys then started burning up and suffering a seizure.

A 999 call was immediately made and the teenager was rushed to Inverclyde Royal Hospital.

Cerys was described as ‘rigid all over’ and put on a ventilator.

The talented dancer sadly never recovered and was pronounced dead at 8.08am.

The cause of death was ‘MDMA toxicity’.

McCairn continued to advertise drugs for sale an hour after Cerys had passed away but he suddenly stopped after news of her death spread.

Other youngsters also came forward to say that they had been given MDMA by McCairn in 2020 including his then 14-year-old girlfriend at the time.

In his closing speech to the jury, Mr Jessop said: ‘McCairn just did not care about Cerys’s age or vulnerability.

‘All he cared about at the time was selling his drugs for profit regardless of the circumstances.’

McCairn did not give evidence during the trial.

Gary Allan QC, defending, told the sentencing: ‘It’s important for me to say in meetings I have had with Mr McCairn it’s been plain to me that the utter tragedy of the death of Cerys Reeve as a consequence of ingesting drugs is fully acknowledged by him.’