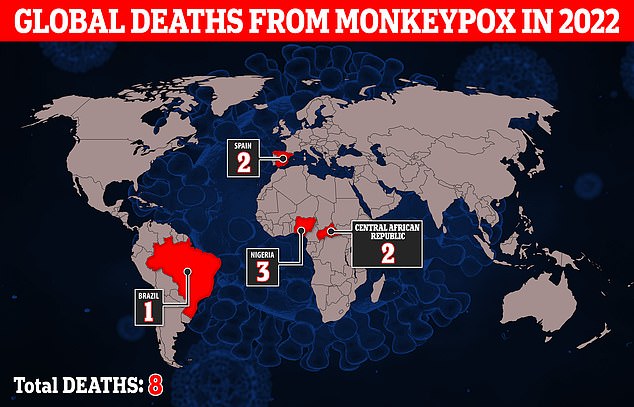 
Spain has confirmed its second death from Monkeypox as the number of cases worldwide continues to climb – and just days after the WHO declared the outbreak a ‘global health emergency’.

The country’s Ministry of Health confirmed the fatality on Saturday as its number of infections grew to 4,298, making it the world leader in terms of caseload outside of the US. The regions of Madrid and Catalunya count the most cases, with 1,656 and 1,406 respectively.

At least 120 Monkeypox carriers have required hospitalisation in Spain, reported El Mundo, representing 3.2 per cent of cases, as one expert warned more deaths can be expected.

It comes after a ‘middle aged’ man from Alicante, in the Valencia region, became the first death in Europe on Friday.

He has not been identified but health authorities said he died from encephalitis associated with the disease, a serious condition which causes the brain to become swollen.

It followed the death a 41-year-old male in Brazil. He had serious immune system complications and was hospitalised at the Eduardo de Menezes Hospital in Belo Horizonte, Minas Gerais, at the time of his death Thursday.

Eight deaths have now been reported as part of the outbreak, with five occurring in African nations where the virus is endemic

Monkeypox has affected more than 16,000 people across 75 countries, according to a tally by the US Centers for Disease Control and Prevention (CDC)

Several countries have now begun launching vaccination drives aimed at men who have sex with men, who continue to be the most at risk group (Pictured: Long queue forms at Guy’s Hospital in central London on Saturday)

Eight deaths have now been reported as part of the outbreak, with five occurring in African nations where the virus is endemic.

Experts in Spain said the strain of the virus currently plaguing the country is from Nigeria and is less fatal than those seen in other parts of the continent.

But Alfredo Corell, professor of Immunology at the University of Valladolid warned: ‘We are facing the possibility of seeing more deaths.’

While the average age of patients in Spain is 37, the age of those who have been infected range from 10 months old to 88.

Several countries have now begun launching vaccination drives aimed at men who have sex with men, who continue to be the most at risk group.

Huge queues for a walk-in jab service were pictured at Guy’s Hospital in central London on Saturday, with similar scenes witnessed last weekend.

People queue up to receive monkeypox vaccinations during a pop-up clinic at Guy’s Hospital in central London on July 30, 2022

Last week the World Health Organisation declared monkeypox a global health emergency, meaning it now views the current outbreak as enough of a significant threat that a coordinated international response is needed.

WHO Director-General Tedros Adhanom Ghebreyesus made the decision to issue the declaration despite a lack of consensus among experts serving on the U.N. health agency’s emergency committee.

It was the first time the chief of the U.N. health agency has taken such an action.

‘We have an outbreak that has spread around the world rapidly through new modes of transmission about which we understand too little and which meets the criteria in the international health regulations,’ Tedros said.

‘I know this has not been an easy or straightforward process and that there are divergent views among the members of the committee,’ he added.

The WHO announcement came after the virus spread to more than 75 countries. Director General Dr Tedros said at the time the risk of people catching the virus in Europe was ‘high’.

The WHO previously declared emergencies for public health crises such as the Covid-19 pandemic, the 2014 West African Ebola outbreak, the Zika virus in Latin America in 2016 and the ongoing effort to eradicate polio.

Although monkeypox has been established in parts of central and west Africa for decades, it was not known to spread beyond the continent or to move widely among people until May, when authorities detected dozens of individual outbreaks in Europe, North America and elsewhere.

The symptoms are followed by a rash that starts on their face or mouth and then spreads to other parts of their body – particularly the hands and feet.

However, in some recent cases, patients first experienced a rash in the mouth or around the genitals or anus.

Anyone can spread monkeypox, but the current outbreak outside of Africa is concentrated almost exclusively among men who have sexual intercourse with men.

The virus spreads primarily via intimate skin-to-skin contact, usually with someone who has an active rash, as well as via contact with contaminated clothes or bedding. It is not as easily transmitted as the SARS-CoV-2 virus that spurred the COVID-19 pandemic.

‘COVID is spread by respiratory route and is highly infectious. This doesn’t appear to be the case with the monkeypox,’ said Dr. Martin Hirsch of Massachusetts General Hospital.