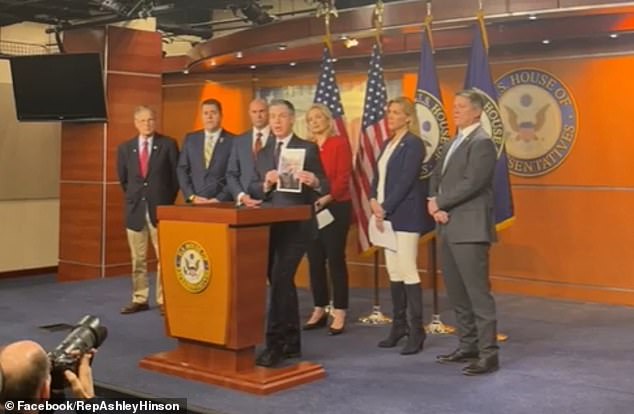 
Republicans declared a war at the southern border – and said the U.S. is losing the fight against cartels and human traffickers under the leadership of President Joe Biden.

In a press conference Tuesday, a group of seven GOP lawmakers led by Representatives Ashley Hinson and Jim Banks vowed to hold the administration accountable for ignoring and even exacerbating the crisis.

The group blamed Biden and Homeland Security Secretary Alejandro Mayorkas for the thousands of people who died of fentanyl overdoses and demanded that the administration designate cartels as terrorist organizations.

‘The fact of the matter is that there is a war at the southern border and we are losing it,’ Banks said.

The sentiment was echoed by Texas Representative Jake Ellzy, a 20-year Navy veteran.

‘It’s time we declare the cartels a clear and present danger to the national security of the United States and treated them as such,’ he insisted.

‘Because if this were a war, we’d be losing it. And make no mistake, they’re fighting us every day.’

Every one of the seven members who took time to speak at the press conference on Tuesday evening spoke about the threat fentanyl flooding into the U.S. poses to their communities – even those who are hundreds of miles away from the border.

Some told personal stories or paid tributes to constituents who died of fentanyl overdoses, and others listed the exponential growth in the drug being smuggled over the border in the years since Biden has taken office.

‘It’s time we declare the cartels a clear and present danger to the national security of the United States and treated them as such. Because if this were a war, we’d be losing it. And make no mistake, they’re fighting us every day,’ Texas Rep. Jake Ellzy said Tuesday

Specifically, the group appeared peeved that Biden’s trip to Mexico for the Three Amigos Summit earlier this month did not result in meaningful plans or future actions to quell the crisis.

Representative Hinson of Iowa mentioned that the top priorities in Biden’s seven-tier plan reached with AMLO was ‘diversity, equity and inclusion, climate change and integrating gender perspectives into disaster response.’

‘So that’s what they came up with to present the American people,’ she bashed. ‘Americans and Iowans have no patience for these woke priorities while fentanyl continues to poison our people, our children. Terrorists continue to come across our southern border, sex offenders are coming into our communities.’

Figures released for December show that the number of encounters at the southern border are continuing to rise – and reached a new all-time single month high of 251,487

‘Americans elected a Republican majority to hold this administration accountable for these continued failures at our southern border and that’s exactly what we will do.’

Before winning a majority in the 2022 midterms, Republicans vowed to open investigations into Biden’s handling of the southern border crisis, as well as potentially impeach Secretary Mayorkas for lying to the American people about the border being closed.

Banks referenced that he sent a letter to Biden nearly 100 days ago requesting a meeting to discuss the border crisis – and specifically fentanyl smuggling and an increase in overdoses due to the dangerous drug.

The Indiana Republican said Biden has ignored this request, but has engaged in other meetings that the group feels are much less pressing.

Biden did ‘have time to meet with transgender activists, the Golden State Warriors and even George Clooney,’ Banks noted.

‘So that tells you a lot about where the Biden administration priorities are,’ he added.

This was yet another increase from months prior, and adds to the more than 4 million migrants who have hopped the border since Biden took office in January 2021. It is also a new all time high topping the crossings in May 2022.

Share. Facebook Twitter Pinterest LinkedIn Tumblr Email
Previous ArticleGermany set to send Leopard 2 tanks to Ukraine, Der Spiegel reports
Next Article “Age is no excuse for being extremely wicked and devilish, this person has dated men far older than me” – Actor, Yomi Fabiyi calls out his baby mama while flaunting his new boo