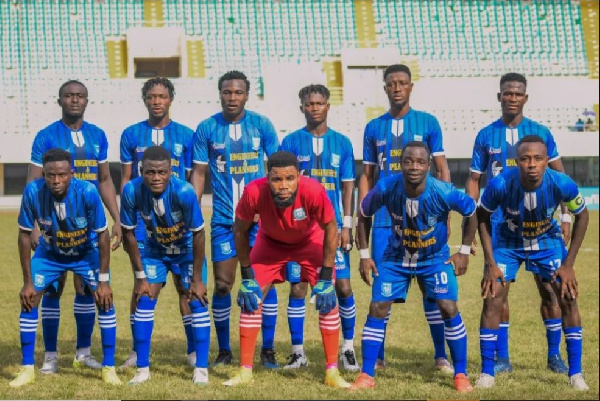 
Real Tamale United were held to a 2-2 stalemate by Dreams FC in the Ghana Premier League on Sunday at the Aliu Mahama Stadium to open the new year.

The Pride of the North had to come from behind to earn a point from the game as they go back-to-back matches without a win.

RTU gaffer Shaibu Ibrahim Tanko made two changes to the team that lost 2-1 to Accra Lions FC last time out in Sogakope and still without star man David Abagna Sandan.

Listowell Amankona earned his very first league start in RTU shirt as he replaced Ishmael Nketiah in the starting lineup.

Samuel Bawa coming back from the injury he picked up against Asante Kotoko SC took the place of Hedir Mohammed in the starting lineup.

Dreams trainer Vladislav Viric also made two alterations to the squad that drew 2-2 with Hearts of Oak at the Theatre of Dreams in the last round.

Maxwell Arthur returned from suspension to replace Victor Oduro who has been outstanding lately for Dreams in the starting lineup.

The hosts got the breakthrough in the 32nd minute through Augustine Ronald Frimpong who converted a penalty to open the scoring.

Just on the stroke of halftime, Issah Ibrahim scored to pull parity for the Dreams.

Ali Huzaif scored his 6th goal of the season in the 60th minute of the match to give the visitors the lead in Tamale with a beautiful strike.

RTU drew level six minutes later after Stephen Badu Dankwa equalized to earn at least for the home side in the matchday 11 encounter.

Dreams will be home to host Legon Cities FC in their next league fixture while RTU travel to Bechem United.