Pregnant mum attack in Perth: Girl, 15, jailed for a year over trying to rob woman with pram 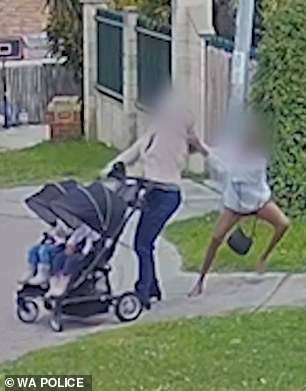 
Girl, 15, who brutally slammed a pregnant mum to the ground by her hair as she was pushing her two children in a pram is sentenced to time behind bars for the vicious attack

A 15-year-old girl who violently attacked a pregnant mum by slamming her to the ground with her hair as she pushed her two toddlers in a pram will spend at least a year in jail.

The teenage girl, who cannot be named for legal reasons, faced Perth Children’s Court on Wednesday and pleaded guilty to aggravated robbery following the September 5 attack.

Judge Hylton Quail described the attack, which was captured on CCTV footage, as ‘sickening’.

The girl was charged with six other offences in Ashfield, Midland and Midvale areas between August 30 and September 5 – including an attack on an 11-year-old girl.

A 15-year-old girl was sentenced to 12 months in jail for attacking a 37-year-old mum, who was five months pregnant at the time, while she was walking her twins with a pram (pictured)

The 15-year-old girl admitted to trying to rob the woman but claimed she was coerced into a series of crimes by her cousin while high on marijuana, WAtoday reported.

During the sentencing, Judge Quail addressed the normalisation of the girl’s violent and anti-social behaviour caused by her dysfunctional upbringing.

‘From very young she was exposed to a high level of alcohol and substance abuse,’ Judge Quail said.

‘She experienced a great deal of neglect and has been hospitalised on a number of occasions for serious injuries as a result of that neglect.’

The 15-year-old was sentenced to 12 months behind bars.

Terrifying footage from the incident showed the 37-year-old mum walking down a Perth laneway in Smallman Place, Ashfield, just before 1pm on September 5 when the teen approached her from behind.

The girl yanked the woman, who was five months pregnant at the time, to the ground by her hair – before pulling her along the concrete away from her children.

The mother tried desperately to hold onto her pram, which toppled over as she was slammed onto the path.

Her twins were left screaming in terror in their upturned pram, while their mother tried to fight off her attacker, who was raining down blows on her head.

‘She (the mother) hung onto that pram for dear life,’ Mr Blanch said at the time of the attack.

‘If that doesn’t demonstrate what a mother is prepared to do to protect their kids, I don’t know what does.’