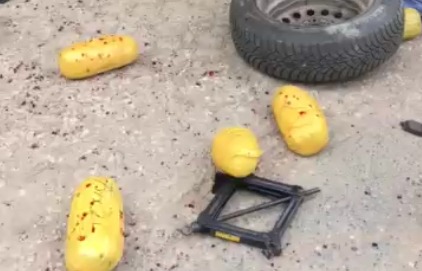 
A policeman from the Tesano police station in Accra has been involved in an accident after he was given a hot chase by some uniformed men.

The policeman, G/Sgt Lotsu Agbeko, who was in charge of his own Blue Black Toyota Corolla, with registration number GC 1069 – 09 failed to stop at a police checkpoint.

The injured policeman was alleged to have been transporting dried leaves suspected to be Indian hemp.

The accident, which happened around the Kpeve mountains, saw the suspected policeman sustain injuries to his left hand.

“The above police officer was transporting the suspected Indian hemp from Have direction and failed to stop at Have police barrier when signalled by personnel on duty to do so. He attempted to escape but was given a hot chase by the personnel. On reaching a section of the road on Kpeve Mountain, he was involved in an accident and had a fracture on his left hand. 84 parcels of compressed dried leaves [were] found in his car boot,” police said in a statement.

The suspect was, however, rushed to the Peki Government Hospital for treatment, where he is responding to treatment but under police guard.

Police have assured of further investigations into the matter and will update the public on further developments.