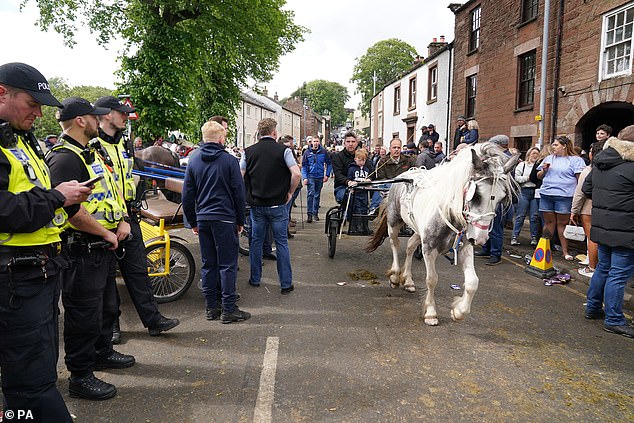 By Catrin Picton For Mailonline

Police have had to issue a stop and search order at Appleby Horse Fair today over fears that weapons and drugs could be on site.

This weekend thousands of travellers from across Europe came to Cumbria for the 250-year-old Appleby Horse Fair.

Today Cumbria Police implemented a Section 60 and 60AA order in the town which allows officers to stop and search people without needing to suspect that they may be carrying weapons.

The historic horse fair dates back to 1685

It also allows them to remove disguises, including face coverings, hoods and masks.

The order was given after police became aware of a group heading to Appleby this afternoon intending to cause trouble.

Cumbria Police officers sealed off the road at Battlebarrow, to stop the group from getting to The Sands and  the town centre.

Police said they made arrests for theft and drug driving and were called to the scene of a crash where a horse died and three people were injured before the fair started.

The incident was resolved and an investigation is now underway as officers work to identify those involved.

Superintendent Matt Kennerley of Cumbria Police said: ‘Our officers acted swiftly to respond to the potential for disruption and prevent any escalation. We are working to identify those involved so action can be taken.

This is the first horse fair since the Covid pandemic impacted on the previous two years, with the fair being cancelled in 2020 and postponed in 2021

‘The Section 60 and 60AA powers will help our officers to keep people safe. However, I also urge anyone with information about potential disorder or any other type of criminality to contact the police.

‘Policing resources will be increased in key areas and at key times. In addition, people may see armed police in the Appleby area to allow such officers to respond swiftly and effectively to any potential situation that arises.

‘Anyone who is seeking to come to the Fair to cause trouble or to be violent is not welcome. Such people should stay away so those who wish to enjoy an enjoyable and safe Fair are free to do so.’

Local pubs closed for the week of the historic horse fair as organisers confirmed that at least 11 pubs in Appleby and Kirkby Stephen will not be open during the event.

Cumbria Police reminded motorists to drive cautiously in the area as many at the festival ride through the streets in horse-drawn carts.

Appleby Primary School, on Station Road also closed on June 10 because of the event.

Cumbria County Council said: ‘The closure is due to the health and safety of pupils travelling to and from school during Appleby New Fair.’

Travellers during the Appleby Horse Fair, the annual gathering of gypsies and travellers

People ride horses in the River Eden, during the Appleby Horse Fair

A total of 30,000 visitors descend on the small town of Appleby-in-Westmorland for the annual four-day event.

Around 10,000 of these are members of the gypsy, Roma and traveller community, with the fair billed is the largest traditional gathering of the community in Europe.

Hundreds of caravans and horse-drawn carriages have moved into the town, while some have set up camp in nearby fields.