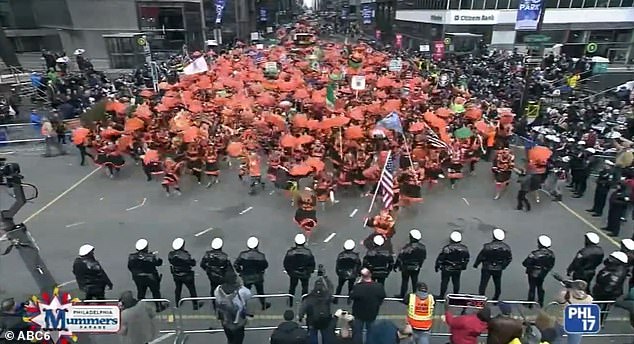 
The United States’ oldest annual folk parade had a woke makeover this year aimed at weeding out costumes deemed racist and transphobic.

Philadelphia’s annual Mummers Parade – due to be held on Sunday – created a ‘human relations commission’ to approve outfits after prior years saw white revelers don blackface in 2020, and one man dress as Caitlyn Jenner in 2016, shortly after she announced she was transgender.

Kevin Lessard, who is the director of communications for the Mayor of Philadelphia, says marshals will be keeping a close eye on outfits this year. He warned that anyone in violation of the new rules will be banned from attending future parades, with city officials ordering all Mummers to receive cultural and sensitivity training from 2016 onwards.

The Mummers Parade is a New Years Day tradition in the city, with groups celebrating in the streets and performing skits and parodies in costumes. This year’s event was pushed back to January 2 because of wet weather, with the commission members now set to ban anyone who breaches its rules on offensive outfits.

It has been sponsored by the city since 1901, but in recent years it has been marred by participants wearing blackface, anti-Semitic and transphobic costumes leading some to call for an end to the annual tradition.

But organizers of this year’s parade – which has been pushed back to Sunday over rainy conditions – say it will be more culturally sensitive this year, as all skits, performances and costumes must first be approved by a human rights commission.

There would also be additional training ahead of the parade, including bias awareness training, CNN reports.

The Mummers Parade, seen here in 2020, is America’s oldest annual folk parade held every year on New Years Day – though it has been pushed back to Sunday this year due to rain

Blackface has become common at the annual festival, with at least two revelers in 2020 seen donning the controversial all-black face paint. One such member is pictured here

Any clubs or individuals found not to be in compliance with the new regulations will be banned from the Mummers Association and future parades.

As part of the annual Mummers Parade, more than 40 organized clubs are categorized into five divisions that each have their own performance specialty and compete against each other for bragging rights – the Comics, the Wench Brigade, Fancies, String Bands and Fancy Brigades.

It traces its origins back to the 17th century when German and Scandinavian immigrants blended their Christmas and New Year traditions into a loud, drunken festival, according to the New York Times.

Then when waves of Irish, Italian and Polish immigrants brought their traditions, the event became a ‘real melting pot of cultures,’ especially in the working class, according to Stephen Highsmith, who wrote a book on the history of Mummery.

Along with those new cultures came a history of minstrel sideshows in which blackface was common, he said.

By 1963, the local chapter of the NAACP and the Congress of Racial Equity persuaded the then-director of the parade to forbid it – sparking anger among many Mummers who protested the ban.

In 1985, a string band even petitioned organizers to be able to use blackface, and in 2016, several people painted their faces brown in a Mexican-themed group.

The parade also came under controversy that year as the Finnegan New Year’s Brigade float featured a man dressed as Bruce Jenner, complete with a fake Olympic medal and a Team USA shirt.

As Diana Ross’ I’m Coming Out played, the man twirled and plopped into a wheelchair as mummers engulfed him, before he reemerged to the tune of Dude Looks Like a Lady and frolicked around in a white outfit resembling the one Caitlyn Jenner wore on the cover of Vanity Fair.

As a backdrop of the offensive skit, marchers carried an image of the famous 1976 Wheaties box featuring then-recent decathlon winner Bruce next to a picture of Caitlyn Jenner on a box of Froot Loops.

Then-Mayor-elect Jim Kenney condemned the display in a tweet, the New York Daily News reports, writing: ‘Our trans citizens do not deserve this type of satire/insult.’

In 2016, one group performed a skit in which a man dressed up as Bruce Jenner with a fake Olympic medal and a Team USA shirt before putting on a wig and a white outfit like the one Caitlyn Jenner wore on the cover of Vanity Fair

As a backdrop of the offensive skit, marchers carried an image of the famous 1976 Wheaties box featuring then-recent decathlon winner Bruce  next to a picture of Caitlyn Jenner on a box of Froot Loops

More recently, in 2020, at least two people wore blackface as they marched with Froggy Carr in the parade.

Their theme was Gritty, the mascot of the Philadelphia Flyers, and marchers in the group wore black and orange costumes and held umbrellas resembling Gritty.

People had on different variations of face paint, 6ABC reported, including orange and black, orange and white, but at least two of the marchers wore only black paint.

Sam Regalbuto, a Mummer and president of the String Band Association, told CNN the individuals who wore blackface back then were ‘two individuals who are not 365-days-a-year Mummers, had a political ax to grind in the city of Philadelphia with politicians.

‘They used us as a platform to make their political statement that day and ruined it for all of us,’ he said. ‘Those individuals have been banned.

‘People who have a political ax to grind aren’t welcome in our parade,’ he added. ‘We have rules and bylaws that we follow.’

But following the parade, Rodney Muhammad, president of he NAACP Philadelphia, said city officials should put an end to the parade.

‘They need to pull the plug on this parade,’ he said, according to 6ABC. ‘I think it’s time for it to go. It’s the only parade that causes controversy on an annual basis.’

He added that the Mummers have had many chances to correct their racial issues, but have consistently come up short.

‘We’ve had the Juneteenth parade, we’ve had Unity Day, every year we have Odunde and we have thousands out,’ Muhammad said. ‘We offend no one. No political groups, ethnicity or religions.

‘All people have wanted is fair justice and want to live in this city without annual insults.’

A few weeks later, Kenney sent a letter to the five leaders of the Mummers divisions and said if they did not put a stop to the use of blackface, the tradition could be in jeopardy.

‘The repeated inability of Mummers leadership to control the use of blackface by some participants threatens the city’s continued support of the parade,’ he wrote.

‘Despite your progress in recent years, every time a parade participant mocks our black community through the willful, ignorant use of blackface, it exacerbates the parade’s association with racism and bigotry.

‘You must understand the frustration of those who feel strongly that taxpayer dollars and corporate funds should not be devoted to supporting this event.’

The two men who wore blackface in 2020 were marching with Froggy Carr, which had members wear black and orange costumes and holding Gritty-themed umbrellas

Gritty is the mascot of the Philadelphia Flyers hockey team

But Regalbuto says that for the most part, Mummers have moved away from celebrating different cultures and ethnicities and focus more on ‘fantasy stuff, Pirates of the Caribbean, wizardry, Halloween-type stuff, we pull a lot from movies and space.

‘We’re adjusting and learning,’ he said, noting: ‘Everyone is welcome.’