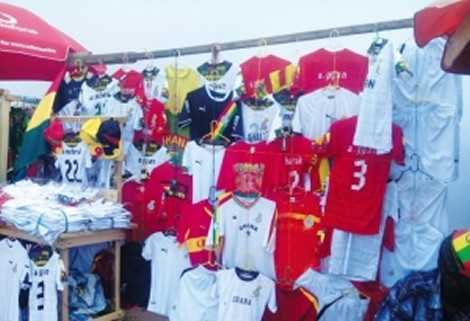 
The sale of Black Stars branded jerseys and other paraphernalia like flags and souvenirs have seen an upward surge in sales ahead of Ghana’s first match against Portugal on Thursday, November 24, 2022.

A visit by GNA Sports news team to the Arts Centre in Accra, saw a massive display of Black Stars jerseys by numerous vendors.

Mr. Kofi Abanga, a vendor at the Arts Center, said Ghana’s victory against Switzerland last Thursday had boosted sales of the jerseys, which according to him cost around Gh80.00 to Gh 100.00, depending on the quality of the material.

“Ghanaians are buying the jersey, especially after our friendly win against Switzerland, and it is anticipated that the sales would even go up before our match with Portugal. I believe there would be massive patronage if Ghana should win their game against Portugal,” he said.

Madam Agnes Quaye, another vendor at the Arts Centre, said the jersey and the paraphernalia were much cheaper a few months ago, but due to the cedi depreciation in recent weeks, the cost had gone up but people were still buying, especially in recent days.

A retailer of the jerseys who gave his name as Joojo, said he came all the way from Ho to get about 50 pieces for redistribution.

“I am coming all the way from Ho to get these jerseys. I have met some people who are coming from all over the country to get some pieces, and I would come back to buy more,” he said.

However, Nana Kwame Boateng, another vendor, said he did not have a stock of the Black Stars’ jersey, because he could not get the originals as it was illegal to sell the fake ones.

“I sell jerseys of other teams but not the Black Stars. It is very difficult to get the originals, so I have decided not to sell the fake ones because it is illegal,” he said.

Share. Facebook Twitter Pinterest LinkedIn Tumblr Email
Previous ArticlePensioner was left trapped inside her house by cars parked in a bay across her front gate
Next Article James Webb telescope: New data on WASP-39b is a ‘game changer,’ scientists say