Over 7,000 NYC nurses strike due to ‘chronic understaffing’ at Mount Sinai and Montefiore hospitals 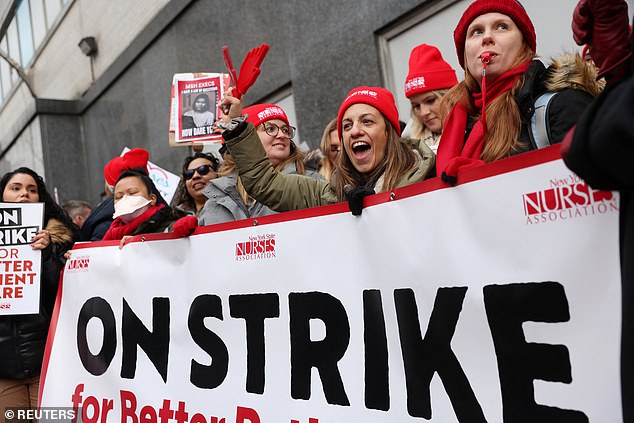 
Nurses at two of New York City‘s largest hospitals went on strike Monday in a dispute over pay and staffing levels after a weekend of negotiations did not produce a deal for a new contract.

The walkout involves as many as 3,500 nurses at Montefiore Medical Center in the Bronx and 3,600 at Mount Sinai Hospital in Manhattan. Patients are likely to see disruptions in care such as emergency room visits and childbirth. The walkout formally began at 6am on Monday.

The New York State Nurses Association, which represents the workers, said the group was being forced into the drastic step because of chronic understaffing that leaves them caring for too many patients at a time.

‘Nurses don’t want to strike. Bosses have pushed us to strike by refusing to seriously consider our proposals to address the desperate crisis of unsafe staffing that harms our patients,’ the union said in a statement late Sunday.

Pizza-themed protest signs were aplenty at the Monday morning protest, referencing the pizza parties thrown for nurses when they complain too much at work

Around the protests on Monday, lots of signs that featured pizza were seen being waved. When the crowd was asked why, they said it was because, typically, when nurses complain too much about staffing shortages they are given a pizza party.

Montefiore officials said in a statement Monday, ‘We remain committed to seamless and compassionate care, recognizing that the union leadership’s decision will spark fear and uncertainty across our community.’

The hospital planned to assign managers not represented by the union to cover nursing shifts.

Montefiore and Mount Sinai had been getting ready for a walkout by transferring patients, diverting ambulances to other institutions, postponing nonemergency medical procedures and arranging for temporary staffing.

Gov. Kathy Hochul urged the union and the hospitals late Sunday to take their dispute to binding arbitration.

Montefiore’s administration had said it was willing to let an arbitrator settle the contract ‘as a means to reaching an equitable outcome.’

The strike involving thousands of nurses is occurring at Montefiore hospital in the Bronx and Mt. Sinai hospital in Manhattan

The union did not immediately accept the proposal. In a statement, it said Hochul, a Democrat, ‘should listen to the frontline COVID nurse heroes and respect our federally-protected labor and collective bargaining rights.’

Montefiore and Mount Sinai are the last of a group of hospitals with contracts with the union that expired simultaneously. The Nurses Association had initially warned that it would strike at all of them at the same time – a potential calamity even in a city with as many hospitals as New York.

But one by one, the other hospitals struck agreements with the union as the deadline approached.

Nurses at New York-Presbyterian Hospital ratified a deal Saturday that will give them raises of 7%, 6%, and 5% over the next three years while also increasing staffing levels. That deal, which covers 4,000 nurses, has been seen as a template for the negotiations with other hospital systems.

Nurses at two facilities in the Mount Sinai system also tentatively agreed to contracts Sunday. But negotiations continued at the system’s flagship hospital on Manhattan’s East Side.

Mount Sinai’s management walked out on negotiations late last week and only returned to the bargaining table Sunday.

Mount Sinai’s administration said in a statement that the union´s focus on staffing-to-patient ratios ‘ignores the progress we have made to attract and hire more new nurses, despite a global shortage of healthcare workers that is impacting hospitals across the country.’

Nurses protest in front of Manhattan’s Mt. Sinai hospital, where complaints of understaffing have persisted since the onset of the COVID-19 pandemic

Zach Clapp, a nurse in the Pediatric Cardiac ICU at Mount Sinai Hospital, signs a board demanding safe staffing during a rally by NYSNA nurses from NY Presbyterian and Mount Sina

NYSNA President Nancy Hagans said that the number one ‘issue is the crisis of understaffing.’

‘We are here to negotiate in good faith, to make sure that the nurses have enough resources to care for the patients.’

Emergency rooms at Montefiore are ‘often so overcrowded that patients are admitted in beds in a hallway instead of hospital rooms,’ Hagans continued.

A Mount Sinai representative said the ‘exact wage agreement’ that was accepted by nurses at Morningside/West was offered to nurses on the East Side campus as well.

‘We are continuing to actively negotiate in good faith with NYSNA and hope they will accept our offer – which would provide an additional $51,000 in cash compensation for each nurse and $19,500 in medical and pension payment benefits over three years,’ said spokesperson Lucia Lee.