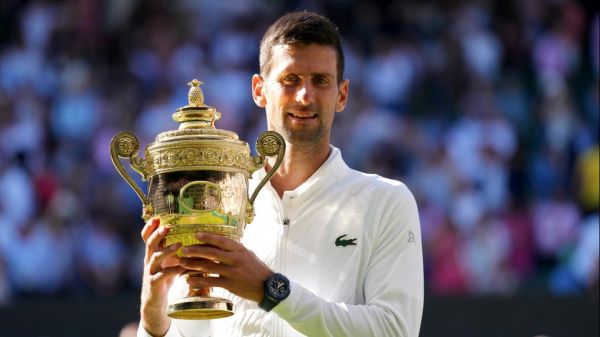 
Novak Djokovic underlined his recent dominance at Wimbledon with a composed and controlled fightback against Australia’s Nick Kyrgios to win a fourth consecutive men’s singles title.

It is Djokovic’s seventh SW19 men’s title and only Roger Federer has more.

Top seed Djokovic made a slower start than his 27-year-old opponent, who initially seemed nerveless in his first Grand Slam singles final.

But the Serb did not lose belief as he showed all of his experience and nous to turn the match around.

“He’s a bit of a god, I’m not going to lie. I thought I played well,” Kyrgios said as he congratulated Djokovic.

Losing his winning position began to irritate Kyrgios, who is known for his fiery temperament as well as his exciting tennis.

While Kyrgios increasingly remonstrated with his support team, Djokovic remained cool in the heat of the battle on a scorching Centre Court.

After clinching victory with his third match point, Djokovic dropped to his haunches and picked a blade of the Centre Court grass to eat in what has now become a customary celebration.

It was a first major win of the year for the Serb, who was stopped from playing in the Australian Open after being deported because of his vaccination status, and lost to Rafael Nadal in the French Open quarter-finals.