NDC UK/Ireland Chapter Chairman Hopeful Dr. Joe Owusu-Agyemang On Why He Must Be Voted For | Politics 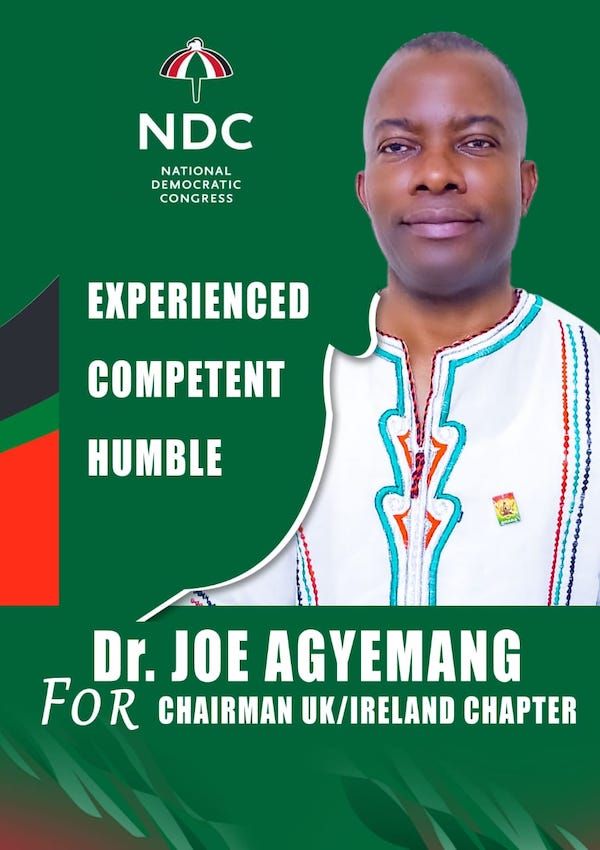 
NDC UK/Ireland Chapter Chairman hopeful, Dr. Joe Owusu–Agyemang during his campaign launch on Tuesday, 15th November, 2022 touched on the need for Ghanaians to kick the NPP government in 2024.

All financial and economic barometers in Ghana at the moment attest to the abysmal performance of the Akufo-Addo led administration.

The recent expose by investigative Journalist, Anas Aremeyaw Anas where a government official was seen taking bribe give a vivid evidence to how governance and leadership have been fed to the dogs under the NPP led administration.

He said never have we as a country been brought to such level of ridicule to a point that the masses are calling for the abject dismissal of the Finance Minister, Mr. Ken Ofori-Atta.

According to Dr. Owusu-Agyemang, the last resort for Ghanaians is the NDC going into the election 2024 victorious, but for the NDC to be better positioned to win the support of Ghanaians, it will have to close its rank and file. This will mean a complete overhaul of how activities are championed within the chapter and branches even in the diaspora.

“It cannot be business as usual when our contenders in the NPP are constantly devising ways and means to subvert the will of the people through foul means,” he said.

He said with the concept of ROPAL being rolled out possibility in election 2024, there is the urgent need and clarion call for the chapter to re–visit it’s modus operandi and adapt a more holistic approach in galvanising its sympathisers and party faithfuls in the diaspora going into election 2024.

It is in view of this responsibility to the good people of Ghana in and outside the UK that Dr. Joe Owusu-Agyemang presents himself as the best candidate for the NDC UK/Ireland Chairmanship position in the upcoming election in December.

According to Dr. Owusu-Agyemang, he has been tried and tested as the Vice Chairman for the chapter and played diverse roles within the NDC UK/Ireland chapter hence it is time he is given the nod to lead the chapter.

He further highlighted the need for the chapter to acquire it’s own meeting place hence was willing to provide a seed capital of £5000.00 in making this vision a reality.

To boost membership drive, he emphasized on the need for the chapter to support students in the acquisition of the E–card of which he is very pleased to support all students in this regard under his leadership as the Chapter Chairman.

In terms of probity and accountability, Dr. Owusu-Agyemang clearly enumerated practical steps in seeing to the realization that funds generated within the chapter are judiciously utilized in the best interest of membership.

He intends to present regular information on the audited account to the entire chapter in it’s regular quarterly meetings once he assumes office as the Chapter Chairman.

In summing up his vision for the chapter, Dr. Owusu-Agyemang hastened to add that the upcoming contest is a friendly bout hence admonished the other contenders to see beyond the elections, but rather think of how to unite the party post-election.

He explained the need for all those vying for positions to acknowledge that the ‘true enemy’ can never be within going into election 2024, hence the need to choose words carefully as we go about our duties during this electioneering period.

He said party members must learn to treat each other with respect at all times and embrace brotherliness in quest to fighting for freedom for our beloved country from the shackles of the NPP.