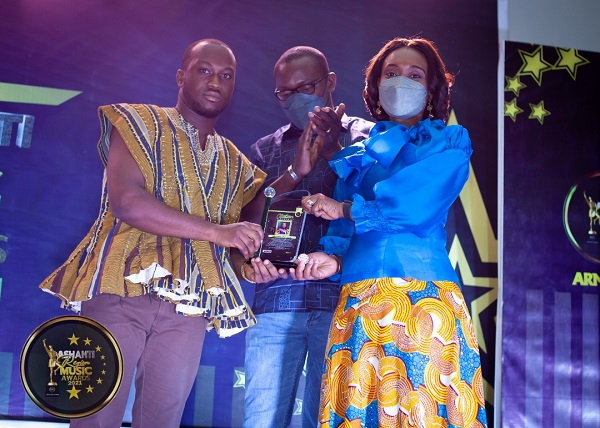 The New Patriotic Party (NPP) Member of Parliament (MP) for Atiwa-East in the Eastern Region, Mrs. Abena Osei-Asare has been honoured at the second edition of the Ashanti Region Music Awards (ARMA) held in Kumasi for her contributions to the annual awards ceremony.

In a citation presented to Mrs. Osei-Asare, who is also a Deputy Minister of Finance at the event held on the theme: “Solidifying the Breakthrough

of Ashanti Region Music”, read, “Your immeasurable contributions are worthy of recognition”.

It stated further that “Your impeccable role was a great push to the event. There are no means we can express our gratitude than to say Oheneba Ayekoo.”

The awards ceremony that took place at the Prempeh II Assembly Hall in Kumasi was organised by 3D Events Management.

The event saw a lot of music lovers as well as several dignitaries including Ministers of State, Politicians, Traditional Leaders, among others all gathered to celebrate the biggest regional music awards in Ghana.

In all, about 40 awards were given out to deserving artistes. Hip Hop musician Yaw Tog emerged as the overall Artiste of the Year and also won the Hip Hop Act of the Year.

Another Hip Hop musician, Jay Bhad also won two awards; Best Music video of the Year, and Album of the Year with his hit track ‘Yeyedom’.

Gospel musician Odehyieba Priscilla won two trophies; Gospel act of the Year and Gospel Song of the Year with ‘Awurade kae wo bohye’

The event ended up with the CEO of Ghana songs being awarded a car for being the Nominee with the highest votes.

The ARMA 2021 would go down in history as one of the best events to be held in the music landscape in the country.

A night of great talent show, a superb display of Ashanti culture, and reunion within the industry.