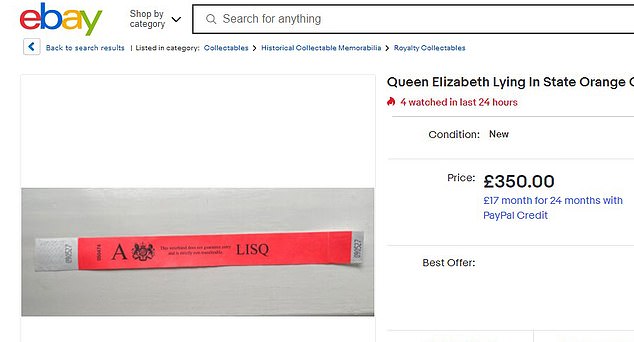 By Summer Goodkind For Mailonline

Mourners who attended the Queen‘s lying-in-state have been selling their used wristbands for as much as £350, even though they will not help buyers jump the queue.

Despite opening just two days ago, around a dozen people have already listed the paper bands on online marketplace eBay – with some saying a percentage of the money will go to charity.

With such an unprecedentedly long queue, those joining have been given coloured wristbands to mark their place – so they can leave for a drink or go to the toilet and then return.

But it appears that some mourners have seen the system as an opportunity to make some cash by selling the wristbands – with some being labelled as in ‘new’ condition.

One person has listed an orange wristband, in ‘new’ condition, which features the Royal coat-of-arms and the abbreviation LISQ, with an asking price of £350.

Brits wishing to pay their respects to the late Sovereign have been able to visit her closed coffin in Westminster Hall in the Houses of Parliament since Wednesday.

The Queen’s lying in state has been open 24 hours a day and will remain so until 6.30am on September 19, the day of her funeral.

However, even today the turn out has been astronomical – and now a queue for the queue to see the Queen’s lying-in-state was set up as mourners arrived at the end of the five-mile and 14-hour wait ‘Elizabeth line’ only to find out it would be shut for at least six hours.

Small print on the paper band specifies that it does not guarantee entry and is strictly non-transferable.

But in the description the seller has listed it as ‘brand new’ and ‘never been used’.

Another seller has listed a similar wristband for £100, while a third person is selling a yellow band – plus a bundle of commemorative newspapers – for £122.

A fourth seller has put their ripped green band on the site for £100.

The item was accompanied by the description: ‘Previously used or worn orange wristband from the first 24 hours of the Queen laying-in-state in Westminster Hall.

‘This wristband gained entry to the original wearer to pay their respects to Queen Elizabeth.

The seller said they were happy to send the item internationally but specified that it was being sold as ‘historical memorabilia only.’

They stressed that 50 per cent of the final profit will be donated to The British Red Cross which Queen Elizabeth was the longest serving patron of.

Another person is trying to flog their dirty orange wristband for the slightly lower price of £82.

While the cheapest band currently listed on the site is up for grabs for £10.

The seller promised to donate 20 per cent of the final price to The Dogs Trust to reflect the Queen’s love of animals.

Members of the public stand in the queue, opposite the skyscrapers of the City of London, as they wait in line this morning

Official guidance published by the government states: ‘When you reach the back of the queue, you will be given a coloured and numbered wristband.

‘This is a record of when you joined the queue, however please note that having a wristband does not guarantee your entry to the lying-in-state.

‘Wristbands are specific to each person joining the queue, and are strictly non-transferable. You must keep this wristband on at all times as it will be checked along the route.

‘Your wristband also allows you to leave the queue for a short period to use a toilet or get refreshments, then return to your place in the queue.’