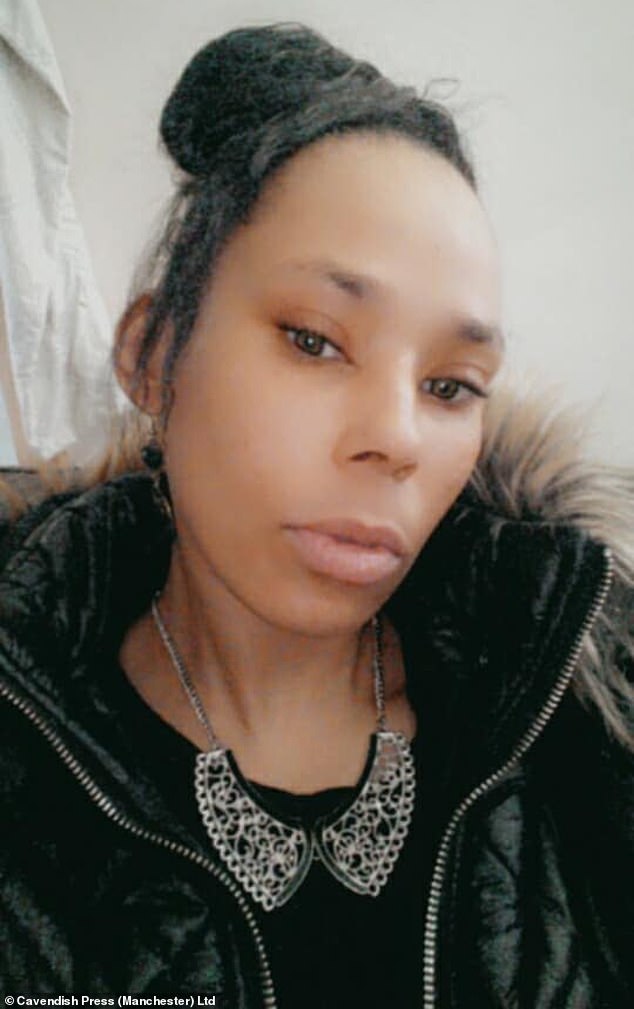 
A mother of two battered one of her best friends with a meat cleaver and left her for dead after they had a fight in the street over £20.

Zara Robertson, 36, grabbed the seven-inch long cleaver from her home and struck Lisa Jacques over the head up to five times before storming off shouting: ‘I’ll go down for murder for her – I’ll kill her.’

Miss Jacques who is also in his 30s was admitted to hospital covered in blood and had multiple stitches for various wounds on her scalp and face. She was said to have been fortunate to escape more serious injuries such as a fractured skull.

Manchester Crown Court heard, Robertson, who had been drinking heavily, had agreed to lend the money to neighbour Miss Jacques but she lost her temper when the victim refused to get into a taxi so they could go to a nearby cashpoint.

Zara Robertson, pictured, was jailed for five years and ten months after she attacked her best friend Lisa Jacques with a meat cleaver during a drink-fuelled row over £20

Lisa Jacques, pictured, suffered serious injuries after she was attacked by her friend in Manchester describing how the incident had ‘a massive effect’ and has left her suffering ‘migraines and panic attacks’

Manchester Crown Court heard Robertson, pictured, had previously served a 30-month sentence in 2015 for assaulting an old man who she had befriended. She also has convictions for assaulting police

In a statement, Miss Jacques of Miles Platting, Manchester said: ‘What Zara did to me has had a massive effect.

‘Since she attacked me I have been suffering from migraines and panic attacks and this has caused me to go to hospital. I did not suffer panic attacks before and they are really scary as I thought I was having a heart attack.

‘I struggle to sleep due to the migraines on most nights and take medication for stress. I have been getting blurry vision and this has been getting worse and worse.

‘I am now trying to get specialist help as I fear I will lose my sight. I am been having a lot of trouble with the residents on this street after what happened. Zara’s uncle owns a house there, she knows people locally and I just don’t dare go outside and see anyone in case of confrontation. I am scared of repercussions.

‘I have a large scar on my head after what she did to me and it’s a reminder of what happened. I have never been assaulted like this before and there are some days when I struggle to get out of bed.’

Ms Jacques, pictured, said she is scared to leave the house as a result of repercussions resulting from the incident. She also said she was worried  about losing her sight

When arrested and taken to a police station Robertson described the officers who handcuffed her as ‘pigs’ and addressed a nurse as ‘white trash’ when she was giving her a check-up.

At Manchester Crown Court, Robertson also of Miles Platting was jailed for five years and ten months after she admitted wounding with intent to cause grievous bodily harm and racially aggravated harassment.

She had previously served 30 months in jail for an assault in 2015 in which she battered a 71-year-old man who had befriended her. She also had convictions for assault on police.

The attack occurred on March 20 last year after the two women had spent the day together at Robertson’s home after meeting up for drinks.

As well as the jail term, Robertson, pictured, was banned from contacting Ms Jacques indefinitely under the terms of a restraining order

Daniel Lister prosecuting said: ‘They lived on the same street across the road from one another and they spent a lot of time in each other’s company.

‘During the course of the day, Miss Jacques borrowed £20 for the defendant. She then left the defendant’s house to visit a relative but when she returned, the defendant became very agitated and asked for her money back.

‘The defendant then called a taxi to take them both to a ATM but when the taxi arrived the victim refused to get into it and walked off towards her own home. There was a scuffle in which attempts were made to force Miss Jacques into the taxi.

‘Subsequently, as Miss Jacques approached her home, the defendant armed with a meat cleaver struck her four to five times on the head whilst shouting: “Get me my money!”

‘Miss Jacques was able to get indoors despite the frightening and unexpected attack but the defendant followed her inside and the scuffle continued.

‘Eventually, she managed to push the defendant outside and close the front door. The defendant then walked off back down the street with the cleaver in her hand whilst shouting; ‘I’ll go down for murder for her – I’ll kill her.’

Robertson was arrested at home but initially denied the offences. The victim was taken to Manchester Royal Infirmary where doctors said she had an ‘incontrollable major haemorrhage.’

She had three serious wounds to the head plus a skin break on her neck and a wound to her hand. Her wounds were glued and various stitches were used but it was not known how many were required.

In mitigation for Robertson defence counsel Alexandra Sutton said: ‘Her recollection of this offence is limited but she blames no one else except herself.

‘She describes herself as disgusted and appalled by her actions, The fact of her friendship with Miss Jacques aggravated this offending in her view and she is particularly ashamed of the actions she took against her friend. She is deeply remorseful.’

‘There was a highly dangerous weapon used which had the capacity to cause much more serious damage than the serious harm it did cause. You are fortunate you did not cause even more harm.’

Robertson was also banned from contacting Miss Jacques indefinitely under the terms of a restraining order.

Actor Blossom Chukwujekwu has remarried. He is currently having his traditional wedding to his Edo…