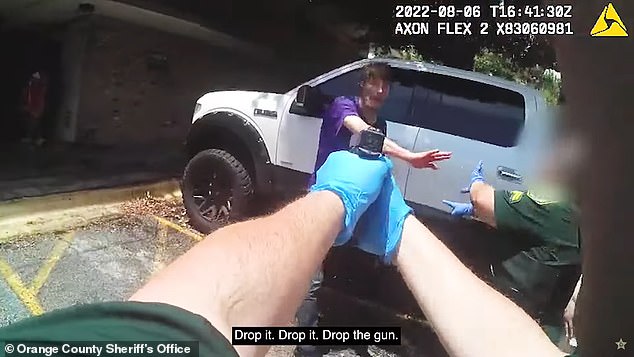 
Chilling new video released by a Florida police department show the moment a deputy gunned down a distraught man moments after his brother was shot and laid dying in a hotel parking lot.

The incident, which transpired Saturday, August 6, outside the Heritage Hotel in Orlando, saw both brothers lives snuffed out – and saw the deputy placed on temporary administrative lead pending an investigation.

According to the department, the brother who had been downed when the deputy arrived on the scene, 21-year-old Dylan Jimenez, had been involved in a gun battle with another man in the moments leading up to the incident.

The scuffle left Jimenez slumped on a car, bleeding out in the hotel parking lot – spurring his brother, 28-year-old Bryan Richardson, to dash to the scene.

Video released by the Orange County Sheriff’s Department Friday show the immediate aftermath of that incident, as onlookers crowded around Jimenez and attempted to tend to the dying man.

However, seemingly unbeknownst to the deputy, just outside the crowd of bystanders surrounding the dying man stood Richardson, visibly distraught over his brother’s condition – and, as one spectator shouts, with a handgun at his side.

Upon noticing the armed man after several seconds already on the scene, the officer draws his service weapon and points it at Richardson, as his female partner goes to take the gun away from him.

In the footage, Richardson does not appear violent and even gives up the gun to the lady cop with his other arm outstretched toward the deputy as if to say ‘Don’t shoot’ – but despite this is unloaded on, shot eight times by the officer.

Chilling new video released by a Florida police department show the moment a deputy gunned down 28-year-old Bryan Richardson moments after his brother, Dylan Jimenez, 21, was shot and laid dying in a hotel parking lot

In the footage, Richardson does not appear violent and even gives up the gun to the lady cop with his other arm outstretched toward the deputy as if to say ‘Don’t shoot’ – but despite this is unloaded on, shot eight times by the officer – who is currently under investigation

Both brothers would later be pronounced dead after being rushed to a nearby hospital.

The release of the heart-wrenching footage comes as cops investigate whether the officer involved was in the right for the slaying – as many question if both siblings had to die.

According to the sheriff’s office, both Jimenez and Richardson had been involved in the ‘altercation’ with the another unnamed man, who was also hospitalized but survived the incident.

Deputies say Jimenez and the third man first began shooting at each other, each hitting the other, leaving the 21-year-old collapsed next to white pickup truck parked outside the hotel.

According to the Sheriff’s office, Jimenez ran to that spot with his brother after being shot, falling in the parking lot on the north side of the hotel where he was spotted by the deputy.

The deputy arrived on the scene to find Jimenez on the floor bleeding out after getting in a gun battle with another unnamed man. Jimenez’s brother, Richardson, can be seen in the background with a handgun in his left hand

However, seemingly unbeknownst to the deputy, just outside the crowd of bystanders surrounding the dying man stood Richardson, visibly distraught over his brother’s condition – and, as one spectator shouts, with a handgun at his side

The body camera video released Friday shows the deputy and his female partner arriving on scene to find Jimenez already being cared for by a civilian, who in the footage claims to be a paramedic.

The officers then attempt to render medical aid to Jimenez – not noticing an armed Richardson standing feet away from his dying brother.

The officers only become aware of the brother after a man shouts out that he has a gun – claiming in the footage that Richardson had been ‘pointing it at people.’

The deputies only then spring into action – with the female officer immediately rushing Richardson, and the male drawing his service weapon and ordering Richardson to drop the gun.

‘Drop it! Drop the gun!’ the officer shouts in the short standoff, as his partner successfully disarms Richardson, who appears visibly emotional and non-confrontational in the clip, despite toting the firearm.

At that point, the deputy fires off eight shots at Richardson – many of them hitting as the victim was falling to the ground.

The footage then cuts out, as both brothers lay fatally shot on the asphalt.

The sheriff’s office did not release any information on the deputy involved, due to Marsy’s Law – a controversial law implemented in 2018 that ensures that victims of crime have equal, constitutional rights on the same level as those accused of crimes – but said the deputy has been with the sheriff’s office since 2018.

He is currently the subject of an internal police probe, and has been placed on temporary administrative leave, which is paid.

The state is also conducting its own investigation into the deputy-involved shooting – as is the case with any use of force.

Orange Country Sheriff John Mina issued a statement upon releasing the disturbing bodycam footage Friday, reaffirming the department’s stance that Richardson had been shot due to his refusal to drop the firearm.

‘Deputies directed that man – later identified as Bryan Richardson – to drop the gun,’ Mina said in a clip that accompanied the crime footage. ‘When he did not comply, one deputy fired his weapon.’

He added that a probe into the incident and the deputy’s actions is continuing.

He said of the brief clip: ‘We think it’s important for members of our community to view the entirety of what is released – rather than rely on short snippets in the media.’

The family of the boys have since retained an attorney, who issued a statement Friday following the footage’s release.

The statement from lawyer Mark NeJame read, in part: ‘We are thankful for the orange County Sheriff’s transparency in releasing the body camera footage to the public.

‘We respect that further camera footage from the first deputy on scene cannot yet be released as the Florida Department of Law Enforcement has the matter under investigation.’

In the statement, NeJame went on to claim that the third man involved in the shooting was a ‘known menace and danger’ to the Heritage Hotel residents.

He insisted that Richardson had been holding his gun to provide protection to the first deputy on scene and the former EMT who was rendering aid to his brother, as the third man was still in the area.

According to the statement, the first deputy on the scene, the deputy’s female partner, gave Richardson consent to do so and knew he was armed with a gun.

The Orange County Sheriff’s office has yet to comment on those claims.

The investigation into the incident is ongoing.