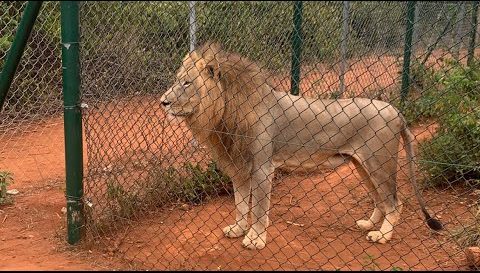 
A middle-aged man has been killed by a lion at the Accra Zoo, located within the Achimota Forest.

The man is said to have broken into the lions’ cage, after which he was attacked and injured by one of them.

The man has been confirmed dead after sustaining injuries.

Authorities at the zoo do not know the motivation behind the man’s actions.

The CEO of the Forestry Commission, John Allotey in a statement said “Around 12:00 hours today 28th August 2022, officials of the Accra Zoo on a routine patrol, noticed a middle-aged man (an intruder) had jumped the security fences and entered the lions’ enclosure of the Zoo. The motive of the intruder is yet to be determined. The intruder was attacked and injured by one of the lions, within the inner fencing of the enclosure.”

“The intruder has been confirmed dead from injuries sustained, and the body has been conveyed to the morgue.”

He noted that all the lions are in good condition.

“Forestry Commission wishes to assure the general public that no lion has escaped from the Accra Zoo,” he added.